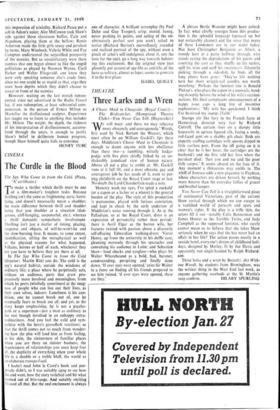 The s Curdle in the Blood

The Spy Who Came in from the Cold. (Plaza, 'A' certificate.)

Pmake a thriller which thrills must be one f a film-maker's toughest tasks. Because thrilling isn't the same as frightening, eerie, horri- fying, and doesn't necessarily mean a shudder; the main difference between thrill and shudder being that you shudder at a situation (dan- gerous, cliff-hanging, suspenseful, etc.), whereas a thrill demands sympathetic involvement. Thrilling isn't just a matter of timing, placing, suspense and objects, of will-he-won't-he and the slow-burning fuse. It means, to some extent, identification, sifting the metaphysical as well as the physical reasons for what happened. Villains, heroes or half of each, whichever they are you have to believe they are there at all.

In The Spy Who Came in from the Cold (director: Martin Ritt) you do. The cold is the spy's natural habitat, outside the windows of ordinary life; a place where he perpetually acts, without an audience, parts that grow pfo- gressively more involved and meaningless, from which he peers (wistfully sometimes) at the snug- ness of people who can live out their lives, as their own selves, indoors. Loneliness is his con- dition, one he cannot break out of, one he eventually fears to break out of; and yet, as the story keeps emphasising, he is not a psycho- path or a superman just a man as ordinary As the rest though involved in an unhappy extra- ordinariness. And you feel the cold and sym- pathise with the hero's gooseflesh reactions; so that the thrill comes not so much from wonder- ing how the plot will land him as from feeling, in his skin, the sinisterness of familiar places when you are there on sinister business, the hopelessness of relationships you must keep free of, the duplicity of everything when your whole life is a double or a treble bluff, the world As an elaborate trompe-l'oeil.

I hadn't read John le Carre's book and pur- posely didn't, so I was suitably agog to see how the end went, how the story twitched and bit what seemed out of bite-range. And suitably exciting I found all that. But the real excitement is always one of character. A brilliant screenplay (by Paul Dehn and Guy Trosper), crisp, muted, funny, never pushing its points, and acting of the un- obtrusively perfect sort you aren't asked to notice (Richard Burton's marvellously rounded and realised portrait of the spy, without even a pinch of actor's self-indulgence about it, sets the tone for the rot), go a long way towards bolster- ing this excitement. But the original view (not gloomily put across) of spy-life as anti-life, of the hero as solitary, almost as leper, seems to generate it in the first place.