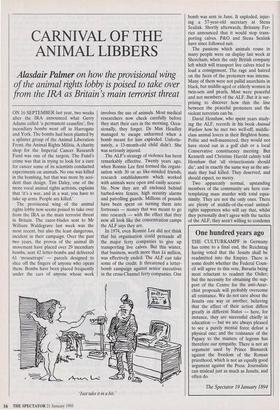 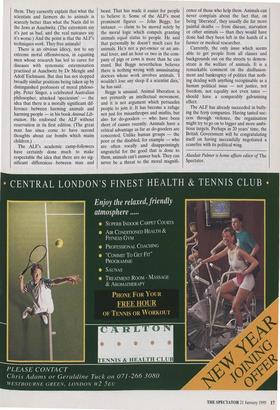 CARNIVAL OF THE ANIMAL LIBBERS

Alasdair Palmer on how the provisional wing

of the animal rights lobby is poised to take over

from the IRA as Britain's main terrorist threat ON 16 SEPTEMBER last year, two weeks after the IRA announced what Gerry Adams called 'a permanent ceasefire', five incendiary bombs went off in Harrogate and York. The bombs had been planted by a splinter group of the Animal Liberation Front, the Animal Rights Militia. A charity shop for the Imperial Cancer Research Fund was one of the targets. The Fund's crime was that in trying to look for a cure for cancer some of its scientists conducted experiments on animals. No one was killed in the bombing, but that was more by acci- dent than design. Tim Daley, one of the more vocal animal rights activists, explains that 'it's a war, and in a war, you have to take up arms. People are killed.'

The provisional wing of the animal rights lobby now seems poised to take over from the IRA as the main terrorist threat in Britain. The razor-blades sent to Mr William Waldegrave last week was the most recent, but also the least dangerous, incident in their campaign. Over the past two years, the provos of the animal lib movement have placed over 29 incendiary bombs, sent 42 letter-bombs and delivered 61 'mousetraps' — parcels designed to slice off the fingers of anyone who opens them. Bombs have been placed frequently under the cars of anyone whose work involves the use of animals. Most medical researchers now check carefully before they start their cars in the morning. Occa- sionally, they forget. Dr Max Headley managed to escape unharmed when a bomb meant for him exploded. Unfortu- nately, a 13-month-old child didn't. She was seriously injured.

The ALF's strategy of violence has been remarkably effective. Twenty years ago, when Ronnie Lee first formed the organi- sation with 30 or so like-minded friends, research establishments which worked with animals were open and easily accessi- ble. Now they are all enclosed behind barbed-wire fences, high security alarms and patrolling guards. Millions of pounds have been spent on turning them into fortresses — money that was meant to go into research — with the effect that they now all look like the concentration camps the ALF says they are.

In 1974, even Ronnie Lee did not think that his organisation could persuade all the major ferry companies to give up transporting live calves. But this winter, that business, worth more than £4 million, was effectively ended. The ALF can take some of the credit. It threatened a letter- bomb campaign against senior executives in the cross-Channel ferry companies. One `Just take it in a bit.' bomb was sent in June. It exploded, injur- ing a 57-year-old secretary at Stena Sealink. Shortly afterwards, Britanny Fer- ries announced that it would stop trans- porting calves. P&O and Stena Sealink have since followed suit.

The passions which animals rouse in many people were on display last week at Shoreham, when the only British company left which will transport live calves tried to load a consignment. The rage and hatred on the faces of the protesters was intense. Many of them were not pallid anarchists in black, but middle-aged or elderly women in twin-sets and pearls. Most were peaceful and not members of the ALF. But it is sur- prising to discover how thin the line between the peaceful protesters and the violent terrorists can be.

David Henshaw, who spent years study- ing the ALF, records in his book Animal Warfare how he met two well-off, middle- class animal lovers in their Brighton home. Polite and well-mannered, they would not have stood out in a golf club or a local Conservative constituency meeting. But Kenneth and Christine Harold calmly told Henshaw that 'all vivisectionists should die', and in exactly the same way as the ani- mals they had killed. They deserved, and should expect, no mercy.

Two apparently normal, upstanding members of the community are here con- templating mass murder with total equa- nimity. They are not the only ones. There are plenty of middle-of-the-road animal- rights supporters who will say that, whilst they personally don't agree with the tactics of the ALF, they aren't willing to condemn them. They earnestly explain that what the scientists and farmers do to animals is scarcely better than what the Nazis did to the Jews at Auschwitz. (The extremists say it's just as bad, and the real nutcases say it's worse.) And the point is that the ALF's techniques work. They free animals!

There is an obvious idiocy, not to say extreme moral offensiveness, in equating men whose research has led to cures for diseases with systematic extermination practised at Auschwitz by Dr Mengle and Adolf Eichmann. But that has not stopped broadly similar positions being taken up by distinguished professors of moral philoso- phy. Peter Singer, a celebrated Australian philosopher, attacked `speciesism' — the idea that there is a morally significant dif- ference between harming animals and harming people — in his book Animal Lib- eration. He endorsed the ALF without reservation in its first edition. (The great man has since come to have second thoughts about car bombs which maim children.) The ALF's academic camp-followers have certainly done much to make respectable the idea that there are no sig- nificant differences between man and beast. That has made it easier for people to believe it. Some of the ALF's most prominent figures — John Beggs, for instance — claim to be moved solely by the moral logic which compels granting animals equal status to people. He said that personally he doesn't much care for animals. He's not a pet-owner or an ani- mal lover, and an hour or two in the com- pany of pigs or cows is more than he can stand. But Beggs nevertheless believes there is nothing wrong with assassinating doctors whose work involves animals. 'I wouldn't lose any sleep if a scientist dies,' he has said.

Beggs is unusual. Animal liberation is not primarily an intellectual movement, and it is not argument which persuades people to join it. It has become a refuge not just for misanthropes and misfits, but also for do-gooders — who have been short of causes recently. Animals have a critical advantage as far as do-gooders are concerned. Unlike human groups — the poor or the disabled, for example — who are often vocally and disappointingly ungrateful for the good that is done to them, animals can't answer back. They can never be a threat to the moral magnifi- cence of those who help them. Animals can never complain about the fact that, on being 'liberated', they usually die far more painful deaths — from disease, starvation or other animals — than they would have done had they been left in the hands of a farmer or medical researcher.

Currently, the only issue which seems able to get people from all classes and backgrounds out on the streets to demon- strate is the welfare of animals. It is a remarkable comment on the disillusion- ment and bankruptcy of politics that noth- ing dealing with anything recognisable as a human political issue — not justice, not freedom, not equality not even taxes should have a comparably galvanising effect.

The ALF has already succeeded in bully- ing the ferry companies. Having tasted suc- cess through violence, the organisation might try tq go on to bigger and more ambi- tious targets. Perhaps in 20 years' time, the British Government will be congratulating itself on having successfully negotiated a ceasefire with its political wing.

Alasdair Palmer is home affairs editor of The Spectator.