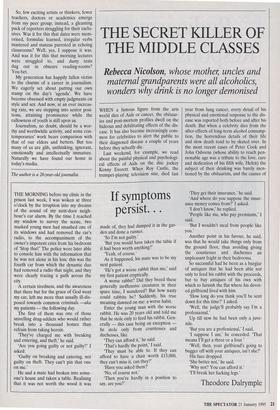 THE MORNING before my clinic in the prison last week, I was woken at three o'clock by the irruption into my dreams of the sound of my next-door neigh- bour's car alarm. By the time I reached my window to survey the scene, two masked young men had smashed one of its windows and had removed the car's radio, to the accompaniment of the owner's impotent cries from his bedroom of 'Stop that!' The police were later able to console him with the information that he was not alone in his loss: this was the fourth car from which the dynamic duo had removed a radio that night, and they were clearly tracing a path across the city.

A certain tiredness, and the awareness that there but for the grace of God went my car, left me more than usually ill-dis- posed towards common criminals —aka my patients — the following day.

The first of them was one of those snivelling drug-addicts who would rather break into a thousand homes than refrain from taking heroin.

`They've charged me with breaking and entering, and theft,' he said.

`Are you going guilty or not guilty?' I asked.

`Guilty on breaking and entering, not guilty on theft. They can't pin that one on me.'

He and a mate had broken into some- one's house and taken a table. Realising that it was not worth the wood it was made of, they had dumped it in the gar- den and done a runner. `So I'm not guilty.' `But you would have taken the table if it had been worth anything?'

`Yeah, of course.' As it happened, his mate was to be my next patient. `He's got a worse rabbit than me,' said my first patient cryptically. A worse rabbit? Did they breed these generally inoffensive creatures in their spare time, I wondered? But how nasty could rabbits be? Suddenly, his true meaning dawned on me: a worse habit. Enter the young man with the worse rabbit. He was 20 years old and told me that he stole only to feed his rabbit. Gen- erally — this case being an exception he stole only from countesses and duchesses, like.

`Have you asked them?'

`Then you're hardly in a position to say, are you?' `They get their insurance,' he said. `And where do you suppose the insur- ance money comes from?' I asked.

Another point in his favour, he said, was that he would take things only from the ground floor, thus avoiding giving the countesses and duchesses an unpleasant fright in their bedrooms.

So successful had he been as a burglar of antiques that he had been able not only to feed his rabbit with the proceeds, but to buy antiques of his own with which to furnish the flat where his devot- ed girlfriend lived with him.

`How long do you think you'll be sent down for this time?' I asked.

Up till now he had been only a juve- nile.

`But you are a professional,' I said.

`Well, then, your girlfriend's going to bugger off with your antiques, isn't she?' His face dropped.