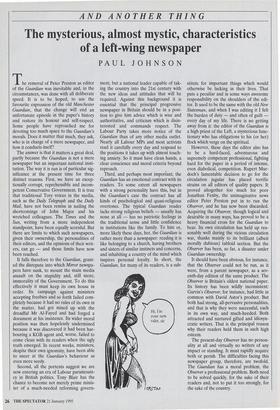 The mysterious, almost mystic, characteristics of a left-wing newspaper

The removal of Peter Preston as editor of the Guardian was inevitable and, in the circumstances, was done with all deliberate speed. It is to be hoped, to use the favourite expression of the old Manchester Guardian, that the change will end an unfortunate episode in the paper's history and restore its honour and self-respect. Some people have reproached me for devoting too much space to the Guardian's morals. Does it matter that much, they ask, who is in charge of a mere newspaper, and how it conducts itself?

The answer is that it matters a great deal, partly because the Guardian is not a mere newspaper but an important national insti- tution. The way it is run is of particular sig- nificance at the present time for three distinct reasons. First, we have an excep- tionally corrupt, reprehensible and incom- petent Conservative Government. It is true that traditional Tory voices in the media, such as the Daily Telegraph and the Daily Mail, have not been remiss in nailing the shortcomings of John Major and his wretched colleagues. The Times and the Sun, writing from a more independent standpoint, have been equally scornful. But there are limits to which such newspapers, given their ownership, the personalities of their editors, and the opinions of their writ- ers, can go — and those limits have now been reached.

It falls therefore to the Guardian, grant- ed the disrepute into which Mirror newspa- pers have sunk, to mount the main media assault on the stupidity and, still more, immorality of the Government. To do this effectively it must keep its own house in order. Its campaign against ministers accepting freebies and so forth failed com- pletely because it had no rules of its own in the matter, had got mixed up with the dreadful Mr Al-Fayed and had forged a document at his insistence. Its wider moral position was then hopelessly undermined because it was discovered it had been har- bouring a KGB agent and, worse, failed to come clean with its readers when the ugly truth emerged. In recent weeks, ministers, despite their own ignominy, have been able to sneer at the Guardian's behaviour as even more seedy.

Second, all the portents suggest we are now entering an era of Labour paramount- cy in British politics. Tony Blair has the chance to become not merely prime minis- ter of a much-needed reforming govern- ment, but a national leader capable of tak- ing the country into the 21st century with the new ideas and attitudes that will be required. Against this background it is essential that the principal progressive newspaper in Britain should be in a posi- tion to give him advice which is wise and authoritative, and criticism which is disin- terested and commands respect. The Labour Party takes more notice of the Guardian than of any other media outlet. Nearly all Labour MPs and most activists read it carefully every day and respond to the positions it takes up with almost touch- ing anxiety. So it must have clean hands, a clear conscience and moral criteria beyond reproach.

Third, and perhaps most important, the Guardian has an emotional contract with its readers. To some extent all newspapers with a strong personality have this, but in the Guardian's case the contract has all kinds of psychological and quasi-religious overtones. The typical Guardian reader lacks strong religious beliefs — usually has none at all — has no patriotic feelings in the traditional sense and little confidence in institutions like the family. To him or, more likely these days, her, the Guardian is rather more than a newspaper: reading it is like belonging to a church, having brothers and sisters of similar instincts and concerns, and inhabiting a country of the mind which inspires personal loyalty. In short, the Guardian, for many of its readers, is a sub- stitute for important things which would otherwise be lacking in their lives. That puts a peculiar and in some ways awesome responsibility on the shoulders of the edi- tor. It used to be the same with the old New Statesman, and when I was editing it I felt the burden of duty — and often of guilt every day of my life. There is no getting away from it: the editor of the Guardian is a high priest of the Left, a mysterious func- tionary who has obligations to his (or her) flock which verge on the spiritual.

However, these days the editor also has to be a hard-faced, adventurous and supremely competent professional, fighting hard for the paper in a period of intense, even diabolical, competition. Rupert Mur- doch's lamentable decision to go for the circulation jugular has placed terrific strains on all editors of quality papers. It proved altogether too much for poor Jonathan Fenby, the unimaginative news editor Peter Preston put in to run the Observer, and he has now been discarded. Acquiring the Observer, though logical and desirable in many ways, has proved to be a heavy financial cross for the Guardian to bear. Its own circulation has held up rea- sonably well during the vicious circulation war, thanks mainly to its brilliant (albeit morally dubious) tabloid section. But the Observer has been, so far, a disaster under Guardian ownership.

It should have been obvious, for instance, that the Observer could not be run, as it were, from a parent newspaper, as a sev- enth-day edition of the same product. The Observer is Britain's oldest national paper. Its history has been wildly inconsistent: Garvin's Observer, for instance, had little in common with David Astor's product. But both had strong, all-pervasive personalities, and that is why they were successful, each in its own way, and much-heeded. Both attracted and nurtured gifted and idiosyn- cratic writers. That is the principal reason why their readers held them in such high esteem.

The present-day Observer has no person- ality at all and virtually no writers of any impact or standing. It must rapidly acquire both or perish. The difficulties facing this newspaper group, therefore, are twofold. The Guardian has a moral problem, the Observer a professional problem. Both need to be solved quickly, for the sake of their readers and, not to put it too strongly, for the sake of the country.