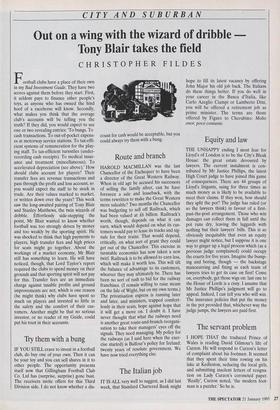 Football clubs have a place of their own in my Bad Investment Guide. They have two scores against them before they start. First, it seldom pays to finance other people's toys, as anyone who has owned the hind hoof of a racehorse will know. Secondly, what makes you think that the average club's accounts will be telling you the truth? If they did, you would expect to see one or two revealing entries: 'To bungs. To cash transactions. To out-of-pocket expens- es at motorway service stations. To tax-effi- cient systems of remuneration for the play- ing staff. To tax-efficient turnstiles (under- recording cash receipts). To medical insur- ance and treatment (miscellaneous). To accelerated depreciation (see above).' How should clubs account for players? Their transfer fees are revenue transactions and pass through the profit and loss account, so you would expect the staff to be stock in trade. Are their values marked to market, or written down over the years? This week saw the long-awaited pairing of Tony Blair and Stanley Matthews, the twin wizards of dribble. Effortlessly side-stepping the point, Mr Blair wanted to know whether football was too strongly driven by money and too weakly by the sporting spirit. He was shocked to think that high payments to players, high transfer fees and high prices for seats might go together. About the workings of a market economy, Mr Blair still has something to learn. He will have noticed, though, that Lord Taylor's report required the clubs to spend money on their grounds and that sporting spirit will not pay for this. Transfer fees are an immediate charge against taxable profits and ground improvements are not, which is one reason (he might think) why clubs have spent so much on players and invested so little in the safety and the comfort of their cus- tomers. Another might be that no serious investor, or no reader of my Guide, could put his trust in their accounts.

Try them with a bung

IF YOU STILL crave to invest in a football club, do buy one of your own. Then it can be your toy and you can sell shares in it to other people. The opportunity presents itself now that Gillingham Football Club Co. Ltd has (surprise, surprise) gone bust. The receivers invite offers for this Third Division side. I do not know whether a dis- count for cash would be acceptable, but you could always try them with a bung.

HAROLD MACMILLAN was the last Chancellor of the Exchequer to have been a director of the Great Western Railway. When in old age he accused his successors of selling the family silver, can he have foreseen a sale and leaseback, with the terms rewritten to make the Great Western more saleable? Two months the Chancellor was budgeting to sell off Railtrack, which had been valued at £6 billion. Railtrack's worth, though, depends on what it can earn, which would depend on what its cus- tomers would pay to lease its tracks and sig- nals for their trains. That would depend, critically, on what sort of grant they could get out of the Chancellor. This exercise in turntable economics has now taken a new twirl. Railtrack is to be allowed to earn less, which will make it worth less. This will tilt the balance of advantage to its customers, whoever they may ultimately be. There has been no sort of rush to bid for the railway franchises. (I remain willing to raise steam on the Isle of Wight, but on my own terms.) The privatisation express is running later and later, and ministers, trapped comfort- lessly in their seats, hope against hope that it will get a move on. I doubt it. I have never thought that what the railways need is another great route-and-branch reorgani- sation to take their managers' eyes off the signals. They need managing. My policy for the railways (as I said here when the exer- cise started) is Balfour's policy for Ireland: twenty years of resolute government. We have now tried everything else.

IT IS ALL very well to suggest, as I did last week, that Standard Chartered Bank might hope to fill its latest vacancy by offering John Major his old job back. The Italians do these things better. If you do well in your career in the Banca d'Italia, like Carlo Azeglio Ciampi or Lamberto Dini, you will be offered a retirement job as prime minister. The terms are those offered by Figaro to Cherubino: Motto onor, poco contante.

THE UNHAPPY ending I most fear for Lloyd's of London is to be the City's Bleak House: the great estate devoured by lawyers. The current instalment is con- tributed by Mr Justice Phillips, the latest High Court judge to have joined this game of consequences. There are 44 groups of Lloyd's litigants, suing for three times as much money as is likely to be available to meet their claims. If they won, how should they split the pot? The judge has ruled (or so the lawyers think) in favour of a first- past-the-post arrangement. Those who win damages can collect them in full until the pot runs dry, leaving the laggards with nothing but their lawyers' bills. This is so obviously inequitable that even an equity lawyer might notice, but I suppose it is one way to ginger up a legal process which (as a previous judge complained) could occupy the courts for five years. Imagine the bump- ing and boring, though — the backstage manoeuvring and fixing as each team of lawyers tries to get its case on first! Come on, everybody, get those wigs on: last one to the House of Lords is a cissy. I assume that Mr Justice Phillips's judgment will go to appeal. Indeed, I can tell you who will win. The insurance policies that put the money in the pot provided that, whichever way the judge jumps, the lawyers are paid first.

I HOPE THAT the traduced Prince of Wales is reading David Gilmour's life of Curzon. He will respond to Curzon's letter of complaint about his footmen. It seemed that they spent their time rowing on his lake at Kedleston, seducing the local girls, and submitting insolent letters of resigna- tion on Lady Curzon's coroneted paper. `Really', Curzon noted, 'the modern foot- man is a puzzler.' So he is.