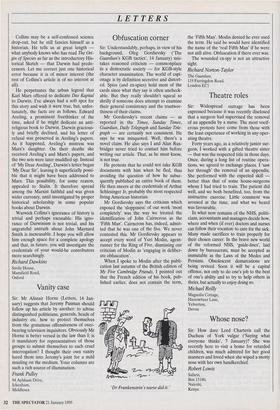 Sir: Widespread outrage has been expressed because it was recently disclosed that a surgeon had supervised the removal of an appendix by a nurse. The most vocif- erous protests have come from those with the least experience of working in any oper- ating theatre.

Forty years ago, as a relatively junior sur- geon, I worked with a gifted theatre sister — that was the respected title in those days. Once, during a long list of routine opera- tions, we agreed to exchange places. I 'saw her through' the removal of an appendix. She performed with the expected skill better than that of some house-surgeons whom I had tried to train. The patient did well, and we both benefited, too, from the instructive exercise. Little comment was aroused at the time, and what we heard was favourable.

In what now remains of the NHS, politi- cians, accountants and managers decide how, where and when (if ever) doctors and nurses can follow their vocation: to care for the sick. Many made sacrifices to train properly for their chosen career. In the brave new world of the reformed NHS, 'guide-lines', laid down by bureaucrats, must be accepted as immutable as the Laws of the Medes and Persians. Obsolescent demarcations are being revived. Soon it will be a capital offence, not only to do one's job to the best of one's ability and to try to help others in theirs, but actually to enjoy doing so.