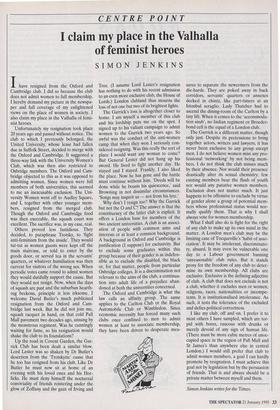 I claim my place in the Valhalla of feminist heroes

Ihave resigned from the Oxford and Cambridge club. I did so because the club does not admit women to full membership. I hereby demand my picture in the newspa- per and full coverage of my enlightened views on the place of women in society. I also claim my place in the Valhalla of femi- nist heroes.

Unfortunately my resignation took place 20 years ago and passed without notice. The club to which I previously belonged, the United University, whose lease had fallen due in Suffolk Street, decided to merge with the Oxford and Cambridge. It suggested a three-way link with the University Women's Club, which was then also restricted to Oxbridge members. The Oxford and Cam- bridge objected to this as it was opposed to admitting women. Since women were full members of both universities, this seemed to me an inexcusable exclusion. The Uni- versity Women went off to Audley Square, and I, together with other younger mem- bers, resigned from the merged club. Though the Oxford and Cambridge food was then execrable, the squash court was excellent. The sacrifice was, in my case, real.

Others proved less fastidious. They decided, to paraphrase Trotsky, to 'fight anti-feminism from the inside'. They would tut-tut as women guests were kept off the main staircase, or told to enter by the goods door, or served tea in the servants' quarters, or whatever humiliation was then current for visitors of the wrong sex. When periodic votes came round to admit women they would dutifully support the cause. But they would not resign. Now, when the days of squash are past and the suburban hearth- rug beckons, principle is less irksome. I welcome David Butler's much publicised resignation from the Oxford and Cam- bridge last week. But he did not join me, squash racquet in hand, on that cold Pall Mall pavement two decades ago, unsung by the monstrous regiment. Was he cunningly waiting for fame, so his resignation would shake the club to its foundations?

Up the road in Covent Garden, the Gar- rick Club has been dealt a similar blow. Lord Lester was so shaken by Dr Butler's desertion from the 'Trotskyite' cause that he too has resigned from his club. Like Dr Butler he must now sit at home of an evening with his loved ones and his Hor- licks. He must deny himself the nocturnal conviviality of friends roistering under the glow of Zoffany and the gaze of Irving and Tree. (I assume Lord Lester's resignation has nothing to do with his recent admission to an even more exclusive club, the House of Lords.) London clubland thus mourns the loss of not one but two of its brightest lights.

The Garrick's loss is altogether closer to home. I am myself a member of this club and his lordship puts me on the spot. I signed up to his valiant campaign to admit women to the Garrick two years ago. So awful was the conduct of the anti-women camp that when they won I seriously con- sidered resigning. Was this really the sort of place I would want any woman to come? But General Lester did not hang up his sword. He lived to fight another day. He stayed and I stayed. Frankly, I also liked the place. Now he has gone and the battle must continue without him. 'Deeds will be done while he boasts his quiescence,' said Browning in not dissimilar circumstances. `Songs may inspirit us — not from his lyre.' Why don't I resign too? Why the Garrick but not the 0 and C? The answer is that the constituency of the latter club is explicit. It offers a London base for members of the two ancient universities. A club is an associ- ation of people with common aims and interests or at least a common background. A background in Oxford and Cambridge is justification (I suppose) for exclusivity. But to exclude some graduates within this group because of their gender is as indefen- sible as to exclude the disabled, the black or, for that matter, people from particular Oxbridge colleges. It is a discrimination not relevant to the aims of the club, a continua- tion into adult life of a prejudice aban- doned at both the universities concerned.

The Oxford and Cambridge is what the law calls an affinity group. The same applies to the Carlton Club or the Royal Automobile Club or Wimbledon. Since economic necessity has forced many such clubs once confined to men to admit women at least to associate membership, they have been driven to desperate mea- sures to separate the newcomers from the die-hards. They are poked away in back corridors, servants' quarters or annexes decked in chintz, like part-timers at an Istanbul seraglio. Lady Thatcher had to ascend the dining-room of the Carlton by a tiny lift. When it comes to the 'accommoda- tion snub', no Indian regiment or Broeder- bond cell is the equal of a London club.

The Garrick is a different matter, though only just. Despite its pretensions to bring together actors, writers and lawyers, it has never been exclusive to any group except men. I do not believe women miss any pro- fessional `networking' by not being mem- bers. I do not think the club misses much by their absence. Nor would their presence drastically alter its sexual chemistry: few existing members bear the flush of youth nor would any putative women members. Exclusion does not matter much. It just happens to be offensive to exclude by virtue of gender alone a group of potential mem- bers whose professional status would nor- mally qualify them. That is why I shall always vote for women membership.

What I shall also do is fight for the right of any club to make up its own mind in the matter. A London men's club may be the limiting case of Tocqueville's 'habit of asso- ciation'. It may be intolerant, discriminato- ry, absurd. It may even be vulnerable one day to a Labour government banning `unreasonable' club rules. But it stands proxy for the freedom of any club to deter- mine its own membership. All clubs are exclusive. Exclusive is the defining adjective of club. A club that does not exclude is not a club, whether it excludes men or women, religions, races, nationalities or incompe- tents. It is institutionalised intolerance. As such, it tests the tolerance of the excluded and defies political correctness.

I like my club, off and on. I prefer it to most others I have sampled, which are tor- pid with bores, raucous with drunks or merely devoid of any sign of human life. (There must be more cubic metres of unoc- cupied space in the region of Pall Mall and St James's than anywhere else in central London.) I would still prefer that club to admit women members, a goal I can hardly promote by resignation. I must achieve this goal not by legislation but by the persuasion of friends. That is and always should be a private matter between myself and them.

Simon Jenkins writes for the Times.