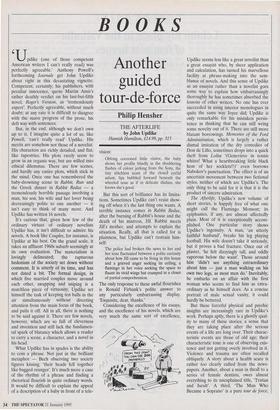 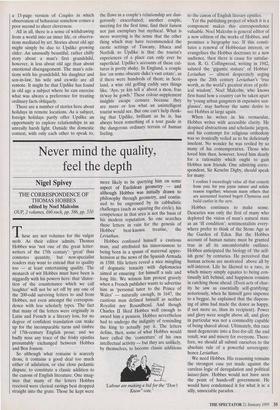 THE AFTERLIFE by John Updike Hamish Hamilton, £14.99, pp. 315 Updike (one of those competent American writers I can't really read) was perfectly agreeable.' Anthony Powell's forthcoming Journals get John Updike about right in this devastating vignette. Competent, certainly; his publishers, with peculiar innocence, quote Martin Amis's rather deathly verdict on his last-but-fifth novel, Roger's Version, as 'tremendously expert'. Perfectly agreeable, without much doubt; at any rate it is difficult to disagree with the suave progress of the prose, his deft way with sentences.

But, in the end, although we don't own up to it, I imagine quite a lot of us, like Powell, 'can't really read' Updike. His merits are somehow not those of a novelist. His characters are richly detailed, and flat, like tapestries. His plots rarely seem to grow in an organic way, but are willed into ethical dilemmas. There are few scenes, and hardly any entire plots, which stick in the mind. Once one has remembered the baby-drowning scene in Rabbit, Run and the Greek dinner in Rabbit Redux — a tremendously horrible passage involving a man, his son, his wife and her lover being decreasingly polite to one another — it isn't easy to think of many more. And Updike has written 16 novels.

It's curious that, given how few of the ordinary virtues of ordinary novelists Updike has, it isn't difficult to admire his novels. A book like Couples, for instance, is Updike at his best. On the grand scale, it takes an affluent 1960s suburb seemingly at its own evaluation. The materialism is lovingly delineated; the rapturous hedonism of the society set down without comment. It is utterly of its time, and has not dated a bit. The formal design, in which five married couples move around each other, swapping and sniping is a matchless piece of virtuosity. Updike set himself the task of keeping ten balls in the air simultaneously without diverting attention from the main focus of the book, and pulls it off. All in all, there is nothing to be said against it. There are few novels, however, which are so full of cleverness and invention and still lack the fundamen- tal spark of blatancy which allows a reader to carry a scene, a character, and a novel in his head.

What Updike has in spades is the ability to coin a phrase. Not just in the brilliant metaphor — Bech observing two society figures kissing, 'their heads fell together like bagged oranges'. It's much more a case of the rhythm of a phrase and finding a rhetorical flourish in quite ordinary words. It would be difficult to explain the appeal of a description of a baby in front of a tele- vision:

Oblong cocooned little visitor, the baby shows her profile blindly in the shuddering flashes of colour jerking from the Sony, the tiny stitchless seam of the closed eyelid aslant, lips bubbled forward beneath the whorled nose as if in delicate disdain, she knows she's good.

But this sort of brilliance has its limita- tions. Sometimes Updike can't resist show- ing off when it's the last thing one wants. A terrible instance comes in Rabbit Redux, after the burning of Rabbit's house and the death of his mistress, Jill. Rabbit meets Jill's mother, and attempts to explain the situation. Really, all that is called for is plainness, but Updike can't restrain him- self:

The police had broken the news to her and her tone fluctuated between a polite curiosity about how Jill came to be living in this house and a grieved anger seeking its ceiling, a flamingo in her voice seeking the space to flaunt its vivid wings but cramped in a closet of partial comprehension.

The only response to these awful flourishes is Ronald Firbank's polite answer to any particularly embarrassing display. `Exquisite, dear, thanks.'

Considering the excellence of his essays, and the excellence of his novels, which are very much the same sort of excellence, Updike seems less like a great novelist than a great essayist who, by sheer application and calculation, has turned his marvellous facility at phrase-making into the sem- blance of novels. And this sense of Updike as an essayist rather than a novelist goes some way to explain how embarrassingly thoroughly he has sometimes absorbed the lessons of other writers. No one has ever succeeded in using interior monologues in quite the same way Joyce did; Updike is only remarkable for his mistaken persis- tence in thinking that he can still wring some novelty out of it. There are still more blatant borrowings. Memories of the Ford Administration, which is largely a rather dismal imitation of the dry comedies of Don de Lillo, sometimes drops into a quick theft from Lolita '(Genevieve in tennis whites! What a heartbreaking little black hem of her socklets!!)' even borrows Nabokov's punctuation. The effect is of an uncertain movement between two fictional styles, neither of which are Updike's. The only thing to be said for it is that it is the product of sincere admiration.

The Afterlife, Updike's new volume of short stories, is happily free of what one might call the Flamingo Moment; its epiphanies, if any, are almost affectedly plain. Most of it is exceptionally accom- plished. One particular story shows Updike's ingenuity. A man, 'an utterly faithful husband', breaks his leg playing football. His wife doesn't take it seriously, but it proves a bad fracture. Once out of plaster, 'he felt dizzyingly tall, and oddly vaporous below the waist'. Those around him 'didn't see anything extraordinary about him — just a man walking on his own two legs, as most men do.' Inevitably, he embarks on an affair with the first woman who seems to find him as extra- ordinary as he himself does. As a concise portrait of male sexual vanity, it could hardly be bettered.

But these forceful physical and psychic insights are increasingly rare in Updike's work. Perhaps aptly, there is a ghostly qual- ity to many of these stories, a sense that they are taking place after the serious events of a life are long over. Their charac- teristic events are those of old age; their characteristic tone is one of observing exis- tence and not getting overly involved in it. Violence and trauma are often recalled obliquely. A story about a health scare is rather too clearly culled from the news- papers. Another, about a man in thrall to a series of female dentists, owes almost everything to its unexplained title, 'Tristan and Iseult'. A third, 'The Man Who Became a Soprano' is a pure tour de force, a 15-page version of Couples in which observation of behaviour somehow comes a poor second to sheer cleverness.

All in all, there is a sense of withdrawing from a world into an inner life, or observa- tions mediated by art. Stories about old age might simply be due to Updike growing older. An unusually beautiful, rather chilly story about a man's first grandchild, however, is less about old age than about emotional disengagement. The man's rela- tions with his grandchild, his daughter and son-in-law, his wife and ex-wife are all remote. It might be that Updike has found in old age a subject where he can exercise what was always a preference for treating ordinary facts obliquely.

There are a number of stories here about holidays in remote locations. As a subject, foreign holidays partly offer Updike an opportunity to explore relationships in an unreally harsh light. Outside the domestic context, with only each other to speak to, the flaws in a couple's relationship are dan- gerously exacerbated; another couple, meeting for the first time, find their liaison not just exemplary but mythical. What is more worrying is the sense that the other thing which may have recommended the exotic settings of Tuscany, Ithaca and Norfolk to Updike is that the tourist's experiences of a place can only ever be superficial. Updike's accounts of these cul- tures is pretty shaky. In England, a couple live 'on some obscure duke's vast estate', as if there were hundreds of them; in Scot- land, a wise old golfing caddy says things like, 'Aye, ye kin tell a' aboot a mon, frae th'way he gowfs.' These colour-supplement insights escape censure because they are more or less what an unintelligent tourist would see. But one can't help think- ing that Updike, brilliant as he is, has always been something of a tour guide in the dangerous ordinary terrain of human feeling.