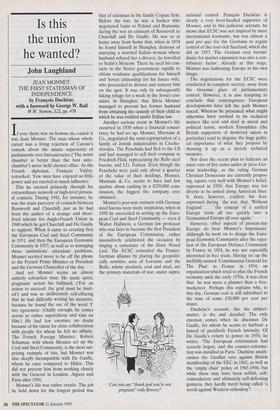 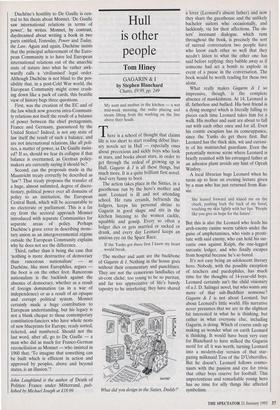 Is this the union he wanted?

JEAN MONNET: THE FIRST STATESMAN OF INDEPENDENCE by Francois Duchene, with a foreword by George W. Ball W.W. Norton, £22, pp. 478 If ever there was an homme du couloir it was Jean Monnet. The man whose whole career was a living rejection of Cavour's remark about the innate superiority of parliaments over bureaucracies (The worst chamber is better than the best ante- chamber') never held elected office. As the French diplomat, Francois Valery, remarked, 'Few men have enjoyed so little power and yet exerted so much influence.'

This he exerted primarily through his extraordinary network of high-level person- al contacts. During 1941, for instance, he was the main purveyor of contacts between Roosevelt and Churchill, just as he had been the author of a strange and short- lived scheme for Anglo-French Union in 1940 which he got Churchill and De Gaulle to support. When it came to creating first the European Coal and Steel Community in 1951, and then the European Economic Community in 1957, as well as to managing those institutions' attendant problems, Monnet seemed never to be off the phone to the French Prime Minister or President and the German Chancellor of the day.

And yet Monnet seems an almost entirely colourless man. He made quiet, pragmatic action his hallmark (Tor an action to succeed, the goal must be limit- ed') and was so deliberately self-effacing that he had difficulty writing his memoirs, because he found the use of the word 'I' too egocentric. (Oddly enough, he comes across as rather supercilious and vain on film.) He had few enemies, no doubt because of his talent for close collaboration with people for whom he felt no affinity. The French Foreign Minister, Robert Schuman, with whom Monnet set up the Coal and Steel Community, is the most sur- prising example of this, but Monnet was also deeply incompatible with De Gaulle, whom he once compared to Hitler. This did not prevent him from working closely with the General in London, Algiers and Paris after 1958.

Monnet's life was rather erratic. The job he held down for the longest period was that of salesman in the family Cognac firm. Before the war, he was a banker who negotiated loans to Poland and Rumania; during the war an emissary of Roosevelt to Churchill and De Gaulle. He was so at home away from home that, when in 1934 he found himself in Shanghai, desirous of marrying a married Italian woman whose husband refused her a divorce, he travelled to Stalin's Moscow. There he used his con- tacts in the Soviet government rapidly to obtain residence qualifications for himself and Soviet citizenship for his future wife, who proceeded to divorce and remarry him on the spot. It was only by subsequently faking refuge for a week in the Soviet con- sulate in Shanghai, that Silvia Monnet managed to prevent her former husband from obtaining the custody of their child to which he was entitled under Italian law.

Another curious event in Monnet's life occurred in 1938 when a financial consul- tancy he had set up, Monnet, Mumane & Co., negotiated the semi-expropriation of a family of Jewish industrialists in Czecho- slovakia. The Petscheks had fled to the US and had managed to sell their company to Friedrich Flick, representing the Ruhr steel barons, and I.G. Farben. Even though the Petscheks were paid only about a quarter of the value of their holdings, Monnet, Murnane & Co. seems to have had few qualms about cashing in a $250,000 com- mission, the biggest the company ever obtained.

Monnet's post-war contacts with German steel barons were more auspicious, when in 1950 he succeeded in setting up the Euro- pean Coal and Steel Community — even if Walter Hallstein, a German law professor who was later to become the first President of the European Commission, rather insensitively celebrated the occasion by singing a caricature of the Horst Wessel Lied. The ECSC cemented the Franco- German alliance by placing the geopoliti- cally sensitive area of Lorraine and the Ruhr, whose products, coal and steel, are the primary materials of war, under supra- `Can you say "thank god you're not pregnant" with flowers?' national control. Francois Duchene is clearly a very level-headed supporter of Monnet, and in this judicious account, he shows that ECSC was not inspired by mere international bonhomie, but was almost a quid pro quo for the Germans to regain - control of the coal-rich Saarland, which she did in 1957. The German coal barons' desire for market expansion was also a con- tributory factor. Already at this stage, Monnet was fashioning Europe in his own image.

The negotiations for the ECSC were conducted in complete secrecy, away from the tiresome glare of parliamentary control. However, it is also tempting to conclude that contemporary European developments have left the path Monnet traced. Whereas he presented what might otherwise have seemed to be technical matters like coal and steel in moral and political terms, modern Europhiles (the British supporters of monetary union in particular) tend to disguise the huge politi- cal importance of what they propose by dressing it up as a merely technical measure.

Nor does the recent plan to federate an inner core of five states under de facto Ger- man leadership, as the ruling German Christian Democrats are currently propos- ing, square very well with Monnet's belief, expressed in 1950, that Europe was too diverse to be united along American lines. It does, however, confirm his fear, expressed during the war, that, 'Without England . . . the concept of a unified Europe turns all too quickly into a Germanised Europe all over again.'

However, other aspects of present-day Europe do bear Monnet's imprimatur. Although he went on to design the Euro- pean Economic Community after the rejec- tion of the European Defence Community by France in 1954, he was not especially interested in free trade. Having set up the ineffably-named 'Commissariat General for The Plan' in France in 1954, an organisation which tried to plan the French economy until the early 1970s, it was clear that he was more a planner than a free- marketeer. Perhaps this explains why, to this day, German coal is still subsidised to the tune of some £30,000 per year per miner.

Duchene's account, like his subject- matter, is dry and detailed. The only emotion comes when he discusses De Gaulle, for whom he seems to harbour a hatred of peculiarly French intensity. Of De Gaulle's return to power in 1958, he writes, 'The European reformation had scarcely begun, and the counter-reforma- tion was installed in Paris.' Duchene anath- emises the Gaullist veto against British membership of the EEC in 1962, as well as the 'empty chair' policy of 1965-1966, but while these may have been selfish, self- contradictory and ultimately self-defeating gestures, they hardly merit being called 'a revolt against Western orthodoxy'! Duchene's hostility to De Gaulle is cen- tral to his thesis about Monnet. 'De Gaulle saw international relations in terms of power', he writes. Monnet, by contrast, daydreamed about writing a book in two parts entitled, Yesterday, Power and Today, the Law. Again and again, Duchene insists that the principal achievement of the Euro- pean Community is to have led European international relations out of the anarchic state of nature into what he rather awk- wardly calls a `civilianised' legal order.

Although Duchene is not blind to the pos- sibility that, in a post-Cold War world, the European Community might come crash- ing down like a pack of cards, this beatific view of history begs three questions.

First, was the creation of the EC and of the law which now governs intra-Communi- ty relations not itself the result of a balance of power between the chief protagonists, France and Germany, guaranteed by the United States? Indeed, is not any state of law itself the result of such a balance, and are not international relations, like all poli- tics, a matter of power, as De Gaulle insist- ed? If so, should we fear its collapse if that balance is overturned, as German policy- makers are currently saying it should be?

Second, can the proposals made in the Maastricht treaty correctly be described as `law'? That treaty proposes the transfer of a huge, almost unlimited, degree of discre- tionary, political power over all domains of policy to an institution, the European Central Bank, which will be accountable to no electorate or parliament. This is a far cry from the sectoral approach Monnet introduced with separate Communities for separate areas of policy. Perhaps Duchene's grave error in describing mone- tary union as an intergovernmental regime outside the European Community explains why he does not see the difference.

Third, rather than it being the case that `nothing is more destructive of democracy than rancorous nationalism' — as Duchene, like most Europhiles, argues the boot is on the other foot. Rancorous nationalism is the backlash against the absence of democracy, whether as a result of foreign domination (as in a war of independence) or as a result of an opaque and corrupt political system. Monnet certainly made a huge contribution to European understanding, but his legacy is not a blank cheque to those contemporary constitution-fanciers who have whole nests of new blueprints for Europe, ready sorted, ticketed, and numbered. Should not the last word, after all, go to De Gaulle — a man who did as much for Franco-German reconciliation as Monnet — who insisted in 1960 that, 'To imagine that something can be built which is efficient in action and approved by peoples, above and beyond states, is an illusion.'?

John Laughland is the author of Death of Politics: France under Mitterrand, pub- lished by Michael Joseph at £18.99.