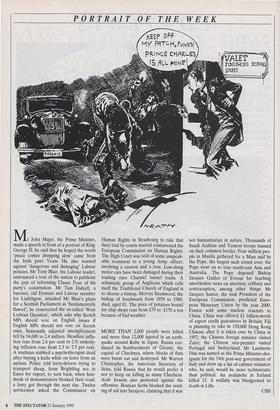 Mr John Major, the Prime Minister, made a speech in front of a portrait of King George II; he said that he hoped the words `peace comes dropping slow' came from the Irish poet Yeats. He also warned against 'dangerous and damaging' Labour policies. Mr Tony Blair, the Labour leader, announced a tour of the nation to publicise the joys of reforming Clause Four of his party's constitution. Mr Tam Dalyell, a baronet, old Etonian and Labour member for Linlithgow, attacked Mr Blair's plans for a Scottish Parliament as 'fundamentally flawed'; he resurrected the so-called 'West Lothian Question', which asks why Scotch MPs should vote on English issues if English MPs should not vote on Scotch ones. Seasonally adjusted unemployment fell by 54,600 to 2.4 million. Headline infla- tion rose from 2.6 per cent to 2.9; underly- ing inflation rose from 2.3 to 2.5 per cent. A madman stabbed a psychotherapist dead after buying a knife while on leave from an asylum. Police told lorry-drivers trying to transport sheep, from Brightling sea in Essex for export, to turn back, when hun- dreds of demonstrators blocked their road; a lorry got through the next day. Twelve servicemen asked the Commission on Human Rights in Strasbourg to rule that their trial by courts martial contravened the European Commission on Human Rights. The High Court was told of some unspeak- able treatment to a young Army officer, involving a cannon and a rose. Low-slung motor cars have been damaged during their loading onto Channel tunnel trains. A schismatic group of Anglicans which calls itself the Traditional Church of England is to choose a bishop. Mervyn Stockwood, the bishop of Southwark from 1959 to 1980, died, aged 81. The price of potatoes bound for chip shops rose from £70 to £170 a ton because of bad weather.

MORE THAN 2,000 people were killed and more than 12,000 injured in an earth- quake around Kobe in Japan. Russia con- tinued its bombardment of Grozny, the capital of Chechnya, where blocks of flats were burnt out and destroyed. Mr Warren Christopher, the American Secretary of State, told Russia that he would prefer it not to keep on killing so many Chechens. Arab Israelis also protested against the offensive. Bosnian Serbs blocked the send- ing of aid into Sarajevo, claiming that it was not humanitarian in nature. Thousands of Saudi Arabian and Yemeni troops massed on their common border. Four million peo- ple in Manila gathered for a Mass said by the Pope, the largest such crowd ever; the Pope went on to tour south-east Asia and Australia. The Pope deposed Bishop Jacques Gaillot of Evreux for teaching unorthodox views on abortion, celibacy and contraception, among other things. Mr Jacques Santer, the next President of the European Commission, predicted Euro- pean Monetary Union by the year 2000. France sold some nuclear reactors to China. China was offered £1 billion-worth of export credit guarantees by Britain; Fiji is planning to take in 150,000 Hong Kong Chinese after it is taken over by China in 1997; the Chinese foreign minister visited Zaire; the Chinese vice-premier visited Portugal and Switzerland. Mr Lamberto Dini was named as the Prime Minister-des- ignate for the 54th post-war government of Italy and drew up a list of cabinet ministers who, he said, would be more technocratic than political. An avalanche in Iceland killed 13. A wallaby was bludgeoned to death in Lille.