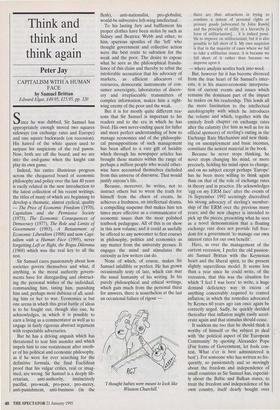 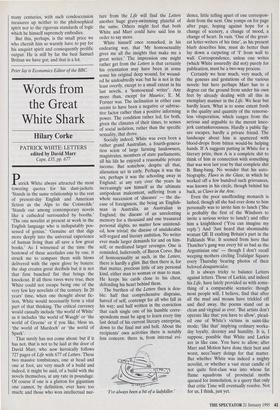 CAPITALISM WITH A HUMAN FACE by Samuel Brittan Edward Elgar, £49.95, £15.95, pp. 320 Since he was dubbed, Sir Samuel has appropriately enough moved two squares sideways (on exchange rates and Europe) and one square backwards (on recession). His hatred of the white queen used to surpass his suspicions of the red pawns. Now, both are off the board; and we are into the end-game when the knight can play its own game.

Indeed, his entire illustrious progress across the chequered board of economic philosophy and policy over the last 40 years is racily related in the new introduction to the latest collection of his recent writings, the titles of many of which are beginning to develop a thematic, almost cyclical, quality — The Price of Economic Freedom (1970), Capitalism and the Permissive Society (1973), The Economic Consequences of Democracy (1977), The Role and Limits of Government (1983), A Restatement of Economic Liberalism (1988) and now Capi- talism with a Human Face (1995), never forgetting Left or Right, the Bogus Dilemma (1968) which was the real key to all the rest.

Sir Samuel cares passionately about how societies govern themselves and what, if anything, is the moral authority govern- ments have for disregarding and obstruct- ing the personal wishes of the individual, commanding him, taxing him, punishing him and, perhaps most dubious of all, send- ing him or her to war. Economics is but one arena in which this great battle of ideas is to be fought out, though also one, he acknowledges, in which it is possible to earn a living as a commentator as well as to engage in fairly rigorous abstract argument with respectable adversaries.

But he has a driving anguish which has threatened to tear him asunder and which impels him to one restatement after anoth- er of his political and economic philosophy, as if he were for ever searching for the definitive formula, the final Euclidean proof that his vulgar critics, real or imag- ined, are wrong. Sir Samuel is a deeply lib- ertarian, anti-authority, instinctively pacifist, pro-weak, pro-poor, pro-mercy, anti-punishment, anti-business (in the flesh), anti-nationalist, pro-globalist, would-be subversive left-wing intellectual.

To his lasting fury and bafflement his proper clothes have been stolen by such as Sidney and Beatrice Webb and other, to him, spurious apostles of the 'left' who thought government and collective action were the best route to salvation for the weak and the poor. The desire to expose what he sees as the philosophical fraudu- lence of this claim and thereby to rebut the intolerable accusation that his advocacy of markets, as efficient allocators of resources, democratic instruments of con- sumer sovereignty, laboratories of discov- ery and irreplaceable transmitters of complex information, makes him a right- wing enemy of the poor and the weak.

But it is for mostly quite different rea- sons that Sir Samuel is important to his readers and to the era in which he has lived. His own never-ending quest for fuller and more perfect understanding of how to manage economies and of the philosophi- cal presuppositions of such management has been allied to a rare gift of lucidity which through his newspaper articles has brought these matters within the range of perhaps a million people who would other- wise have accounted themselves dxcluded from this universe of discourse. That would justify anyone's life.

Because, moreover, he writes, not to instruct others but to wrest the truth for himself from the chaos of events, he achieves a freshness, an intellectual drama, a compelling suspense that makes him ten times more effective as a communicator of economic issues than the most polished textbook pedagogue. All of this is on show in this new volume; and it could as usefully be offered to any newcomer to first courses in philosophy, politics and economics as any matter from the university presses. It engages the mind and stimulates the curiosity as few writers can do.

None of which, of course, makes Sir Samuel infallible or perfect. He has grown occasionally testy of late, which can mar the usual humanity of his writing. In his purely philosophical and ethical writings, which gain much from the personal thirst for answers, there is nonetheless at the last an occasional failure of rigour — I thought babies were meant to look like Winston Churchill.'

there are thus attractions in trying to combine a system of personal rights or primary goods [advocated by John Rawls] and the principle of utility in a hierarchy [a form of utilitarianism]. . . it is indeed possi- ble to improve on utilitarianism; but it is also possible to fall short of it. My own suspicion is that in the majority of cases where we fail to take a utilitarian stance, it is because we fall short of it rather than because we improve upon it

— where analysis nestles back into wool.

But, however far it has become divorced from the true heart of Sir Samuel's inter- ests, it is his macro-economic interpreta- tion of current events and issues which remains the dominant part of the impact he makes on his readership. This lends all the more fascination to the intellectual autobiography with which he introduces the volume and which, together with the entirely fresh chapter on exchange rates after the calamity (for him as well as for its official sponsors) of sterling's outing in the Exchange Rate Mechanism and new think- ing on unemployment and basic incomes, constitute the newest material in the book.

Because he never stops thinking, he never stops changing his mind, or more precisely, holding his mind open to change; and on no subject except perhaps 'Europe' has he been more willing to think again than on that of the role of exchange rates in theory and in practice. He acknowledges `egg on my ERM face' after the events of 16 September 1992 seemingly discredited his strong advocacy of sterling's member- ship of the ERM over the previous many years; and the new chapter is intended to pick up the pieces, presenting what he sees as a novel demonstration that a floating exchange rate does not provide full free- dom for a government 'to manage our own interest rates for our own benefit'.

Here, as over the management of the current recession, I prefer the old passion- ate Samuel Brittan with the Keynesian heart and the liberal spirit, to the present slightly supercilious model. It seems less than a year since he could .write, of the recession, that this was the situation for which 'I feel I was born' to write, a-huge demand deficiency way in excess of anything conceivably required to control inflation, in which the remedies advocated by Keynes 60 years ago can once again be correctly urged. Sadly, he quickly decided thereafter that inflation might easily accel- erate again and that stimulus should cease.

It saddens me too that he should think it worthy of himself or the, subject ;o deal' with 'the political aspect of the `European Community' by quoting Alexander Pope (For forms of Government, let fools con- test, What e'er is best administered is best'). For someone who has written so fre- quently, so passionately and so movingly about the freedom and independence of small countries as Sir Samuel has, especial- ly about the Baltic and Balkan states, to treat the freedom and independence of his own country, itself dearly bought over many centuries, with such condescension measures up neither to the philosophical spirit nor to the rigorous standards of logic which he himself supremely embodies.

But this, perhaps, is the small price we who cherish him so warmly have to pay for his unquiet spirit and consequently prolific output. He is still by far the best Samuel Brittan we have got; and that is a lot.

Peter Jay is Economics Editor of the BBC.