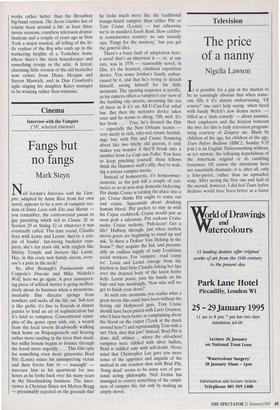 Interview with the Vampire (`18', selected cinemas)

Fangs but no fangs

Neil Jordan's Interview with the Vam- pire, adapted by Anne Rice from her own novel, appears to be a sort of vampiric ver- sion of Jenny Lives with Eric and Martin you remember, the controversial paean to gay parenting which led to Clause 28 or Section 29 or Stalag 32 or whatever it was eventually called. This time round, Claudia lives with Louis and Lestat: they're a cou- ple of feudin', fun-loving bachelor vam- pires; she's ten years old, with ringlets like Shirley Temple and incisors like Lassie. Hey, in this crazy new family sitcom, every- one's a pain in the neck!

So, after Branagh's Frankenstein and Coppola's Dracula and Mike Nichols's Wolf, here we go again. A poor unsuspect- ing piece of schlock horror is going inoffen- sively about its business when a monstrous, insatiable film director springs from nowhere and sucks all the life out. Sub-text is like garlic: it's fine to flourish at dinner parties to lend an air of sophistication but it's fatal to vampires. Conventional exam- ples of the genre open with, say, a wench from the local tavern ill-advisedly walking back home on Walpurgisnacht and hearing rather more rustling in the trees than usual; her milky bosom begins to bounce through the forest more urgently . . . This film opts for something even more gruesome: Brad Pitt (Louis) seizes his unsuspecting victim and then forces him to — aaaaagh! interview him in his apartment for two hours as he looks back over his many years in the bloodsucking business. The inter- viewer is Christian Slater not Melvyn Bragg — presumably rejected on the grounds that he looks much more like the traditional lounge-lizard vampire than either Pitt or Tom Cruise (Lestat) — but otherwise we're in standard South Bank Show celebri- ty reminiscence country: no one actually says 'Fangs for the memory,' but you get the general idea.

There's a basic fault of adaptation here: a novel that's an interview is — or, at any rate, was in 1976 — reasonably novel; in film, it's the hoariest, clunkiest exposition device. You sense Jordan's faintly embar- rassed by it, and that he's trying to detach himself, saving himself for his little moments. The opening sequence is terrific, as his camera offers a vampire's eye view of the bustling city streets, savouring the sea of faces as if it's an All-U-Can-Eat salad bar. But then the narrative device takes over and he seems to shrug, 'Oh, well. It's her book . . . ' True, he's dressed the film — especially the New Orleans scenes very nicely in rich, ruby-red ornate furnish- ings, but, with Pitt and Cruise flouncing about like two bitchy old queens, it only makes you wonder if they'll break into a number from La Cage aux Folles. You have to keep pinching yourself: these fellows think the Hammer stuffs silly; they're mak- ing a serious vampire movie. Instead of homoerotic, it's homeowner- neurotic, as the pair kill a couple of cen- turies or so in non-stop domestic bickering. Pitt thinks Cruise is turning the place into a pit; Cruise thinks Pitt ought to come out and cruise. Squeamish about drinking human blood, Pitt prefers to stay in with his Cajun cookbook; Cruise would just as soon grab a takeaway. Pitt reckons Cruise sucks; Cruise reckons, `Puh-leeze! Get a life!' Halfway through, just when restless movie-goers are beginning to stand up and ask, 'Is there a Doktor Van Helsing in the house?' they acquire the kid, and presum- ably an endless supply of tasty Louisiana social workers. For 'vampire', read 'camp ire'. Louis and Lestat emerge from the kitchen to find little Claudia licking her lips over the drained body of the latest home help. Lestat pouts, puts his hands on his hips and tuts mockingly, 'Now who will we get to finish your dress?' At such rare moments, you realise what a great movie this could have been without the boring old Hollywood guys. Tom Cruise should have been paired with Larry Grayson, who'd have been better at complaining about the blood on the carpet (took at the muck around here!') and reprimanding Tom with a tart 'Ooh, shut that jaw!' Instead, Brad Pitt is dour, dull, whiney ... where the old-school vampires were riddled with silver bullets, Brad is riddled only with self-doubt. Never mind that Christopher Lee gave you more sense of the appetites and anguish of the undead in one reaction shot; with Brad Pitt, `living dead' seems to be some sort of per- sonal acting philosophy. Neil Jordan has managed to convey something of the empti- ness of vampire life, but only by making an empty movie.