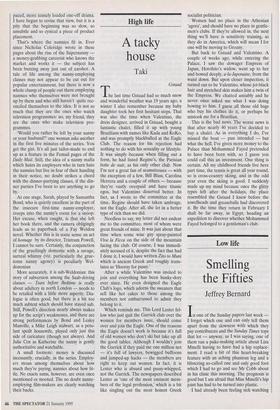 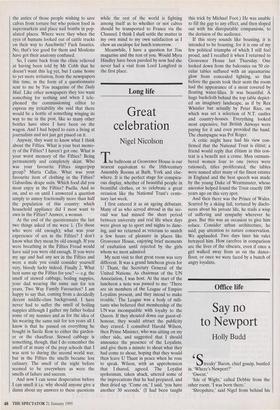 Jeffrey Bernard In one of the Sunday papers last week I forget which one and can only tell them apart from the slowness with which they pay contributors and the Sunday Times tops that lot — anyway, as I was saying, one of them ran a puke-making article about Liza Minelli having to have had a hip replace- ment. I read a bit of this heart-breaking feature with an aching phantom leg and a blistering so-called one and only good foot which I had to go and see Mr Cobb about in his clinic this morning. The prognosis is good but I am afraid that Miss Minelli's hip joint has had to be turned into plastic.

I had already been feeling sick watching the antics of those people wishing to save calves from torture but who poison food in supermarkets and place nail bombs in pop- ulated places. Where were they when the eyes of humans looked out of cattle trucks on their way to Auschwitz? Fuck fanatics. No, that's too good for them and Moslems have got their anatomy confused.

So, I came back from the clinic relieved at having been told by Mr Cobb that he doesn't want this leg yet, but I came home to yet more irritation, from the newspapers this time, in the form of a questionnaire sent to me by You magazine of the Daily Mail. Like other newspapers they too want something for nothing and when I tele- phoned the commissioning editor to express my irritability she said that there would be a bottle of something winging its way to me in the post, like so many other bottles have since I have been on the wagon. And I had hoped to earn a living at journalism and not just get pissed on it.

At the end of the questionnaire the last two things asked of me were 1. (To those who were old enough); what was your experience of sex in the Fifties? I don't know what they mean by old enough. If you were breathing in the Fifties Freud would have said you were old enough. If you were my age and had any sex in the Fifties and were a male you could consider yourself very, bloody lucky indeed. Finally 2. What best sums up the Fifties for you? — e.g. the smell of stewed cabbage, boiling nappies, your dad wearing the same suit for ten years, Two Way Family Favourites? I am happy to say that, coming from a decidedly decent middle-class background, I have never had to suffer the smell of boiling nappies although I gather my father boiled some of my nannies and as for the idea of his wearing the same suit for ten years all I know is that he passed on everything he bought in Savile Row to either the garden- er or the chauffeur. Stewed cabbage is something, though, that I do remember the smell of at many of the prep schools that I was sent to during the second world war, but in the Fifties the smells became less culinary. The smell of the night before seemed to be everywhere as were the smells of failure and success.

And now I can sense desperation before I can smell it i.e. why should anyone give a damn about my answers to these questions while the rest of the world is fighting among itself as to whether or not calves should be transported to France via the Chunnel. I think I shall settle the matter in my own mind to my own satisfaction as I chew an escalope for lunch tomorrow.

Meanwhile, I have a question for You magazine and the rest of you. Would Myra Hindley have been paroled by now had she never had a visit from Lord Longford in the first place.