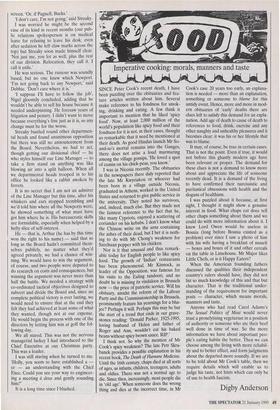 SINCE Peter Cook's recent death, I have been puzzling over the obituaries and fea- ture articles written about him. Several make reference to his fondness for smok- ing, drinking and eating. A few think it important to mention that he liked 'spicy food'. Now, at least 2,000 million of the world's population like spicy food and their fondness for it is not, in their cases, thought so remarkable that it need be mentioned at their death. As good Hindus launch Mr So- and-so's mortal remains into the Ganges, there does not arise a loud murmuring among the village gossips, 'He loved a spot of cumin on his chick-peas, you know.'

I was in Nicosia recently. The obituaries in the newspapers there duly reported that the late Mr Kwyriakou or whoever had been born in a village outside Nicosia, graduated in Athens, worked in the United States and returned to give public service in the university. They noted his survivors, and, indeed, much else. But they made not the faintest reference to the fact that he, like many Cypriots, enjoyed a scattering of coriander on his kebabs. I don't know what the Chinese write on the urns containing the ashes of their dead, but I bet it is noth- ing to do with Mr Chong's weakness for Szechuan pepper with his chicken. Nor is it that unusual and thus remark- able today for English people to like spicy food. The growth of 'Indian' restaurants has been phenomenal. Mr Kinnock, as leader of the Opposition, was famous for his visits to the Ealing tandoori, and no doubt he is missing its vindaloos in Brussels now — the price of patriotic service. Will his obituary, amidst the reform of the Labour Party and the Commissionership in Brussels, prominently feature his yearnings for a bha- jee? Perhaps it will. Perhaps this may be but the start of a trend that ends in our grave- stones reading: 'Donald Parker, 1925-1995, loving husband of Helen and father of Roger and Ann, wouldn't eat his baked beans without spicy brown sauce. RIP.' I think not. So why the mention of Mr Cook's spicy weakness? The late Petr Skra- banek provides a possible explanation in his recent book, The Death of Humane Medicine. Until the 16th century, chaps died at all sorts of ages, as infants, children, teenagers, adults and oldies. There was not a normal age to die. Since then, increasingly, most people die in 'old age'. When someone does the wrong thing and dies at the incorrect time, in Mr Cook's case 20 years too early, an explana- tion is needed — more than an explanation, something or someone to blame for this untidy event. Hence, more and more in mod- ern obituaries of 'early' deaths there are clues left to satisfy this demand for an expla- nation. Add age of death to cause of death to references to food, drink, exercise and any other naughty and unhealthy pleasures and it becomes clear: it was his or her lifestyle that was to blame.

It may, of course, be true in certain cases. That is not the point. Even if true, it would not before this ghastly modern age have been relevant or proper. The demand for these clues is not a demand to know more about and appreciate the life of someone recently dead. It is a demand of the living to have confirmed their narcissistic and puritanical obsessions with health and the slogans of healthism.

I was puzzled about it because, at first sight, I thought it might show a genuine interest in food. What chaps eat does tell other chaps something about them and we could do with more information about it. I knew Lord Owen would be useless in Bosnia (long before Bosnia existed as a problem) ever since I saw a photo of him with his wife having a breakfast of museli — boxes and boxes of it and other cereals on the table in Limehouse. Mr Major likes Little Chefs, or is it Happy Eaters?

When the American founding fathers discussed the qualities their independent country's rulers should have, they did not list so much knowledge of this and that but character. That is the traditional under- standing of the requirement for important posts — character, which means morals, manners and taste.

Anyone who had read Carol Adams's The Sexual Politics of Meat would never trust a proselytising vegetarian in a position of authority or someone who ate their beef well done in time of war. So the more information we have about important peo- ple's eating habits the better. Then we can choose among the living with more reliabil- ity and to better effect, and form judgments about the departed more soundly. If we are to be told about Mr Cook's table, then we require details which will enable us to judge his taste, not hints which can only be of use to health fascists.