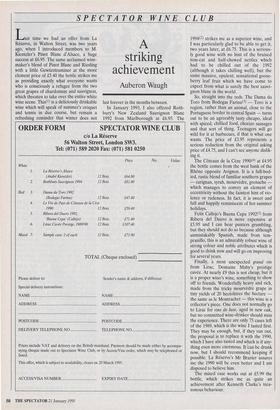 last forever in the months between.

NAME ADDRESS ADDRESS POSTCODE POSTCODE DELIVERY TELEPHONE NO TELEPHONE NO Prices include VAT and delivery on the British mainland. Payment should be made either by accompa- nying cheque made out to Spectator Wine Club, or by AccessNisa order, which may be telephoned or faxed.

This offer, which is subject to availability, closes on 20 March 1995.

1994(2) strikes me as a superior wine, and I was particularly glad to be able to get it, two years later, at £6.75. This is a serious- ly good wine with no hint of the bruised tom-cat and half-chewed nettles which had to be chilled out of the 1992 (although it takes chilling well), but the same massive, opulent, sensational goose- berry leaf fruit which we have come to expect from what is surely the best sauvi- gnon blanc in the world.

So, straight into the reds. The Dama da Toro from Bodegas Farina(3) — Toro is a region, rather than an animal, close to the Portuguese border in central Spain — turns out to be an agreeably tasty cheapo, ideal with spiced, chillied food, chorizo sausages and that sort of thing. Teenagers will go wild for it at barbecues, if that is what one wants. The price of £3.95 represents a serious reduction from the original asking price of £4.75, and I can't see anyone dislik- ing it.

The Meaux de la Ceze 1990(4) at £4.95 the bottle comes from the west bank of the Rhone opposite Avignon. It is a full-bod- ied, rustic blend of familiar southern grapes — carignan, syrah, mourvedre, grenache which manages to convey an element of eccentricity without the faintest hint of vio- lence or rudeness. In fact, it is sweet and full and happily reminiscent of hot summer holidays.

Felix Callejo's Buena Cepa 1992(5) from Ribera del Duero is more expensive at £5.95 and I can hear punters grumbling, but they should not do so because although unmistakably Spanish, made from tem- pranillo, this is an admirably robust wine of strong colour and noble attributes which is good to drink now and will go on improving for several years.

Finally, a most unexpected grand vin from Lirac, Domaine Maby's prestige cuvee. At nearly £9 this is not cheap, but it is a proper wino's wine, something to show off to friends. Wonderfully heavy and rich, made from the tricky mourvedre grape in tiny yields of 20 hectolitres the hectare the same as le Montrachet — this wine is a collector's piece. One does not normally go to Lirac for vins de luxe, aged in new oak, but no committed wine-drinker should miss the experience. There are only 75 cases left of the 1989, which is the wine I tasted first. They may be enough, but, if they run out, the proposal is to replace it with the 1990, which I have also tasted and which is if any- thing even more enormous. It can be drunk now, but I should recommend keeping if possible. La Reserve's Mr Brazier assures me the 1990 will be even better and I am disposed to believe him.

The mixed case works out at £5.99 the bottle, which strikes me as quite an achievement after Kenneth Clarke's trea- sonous behaviour.