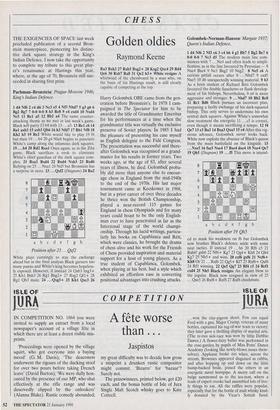 THE EXIGENCIES OF SPACE last week precluded publication of a second Bron- stein masterpiece, pioneering his distinc- tive dark square strategy in the King's Indian Defence. I now take the opportunity to complete my tribute to this great play- er's renaissance at Hastings this year, where, at the age of 70, Bronstein still suc- ceeded in sharing first prize.

Harry Golombek OBE came from the gen- eration before Bronstein's. In 1978 I cam- paigned in The Spectator for him to be awarded the title of Grandmaster Emeritus for his performances at a time when the grandmaster title was virtually the exclusive preserve of Soviet players. In 1985 I had the pleasure of presenting his case myself as English delegate to the Fide Congress. The presentation was successful and there- after Golombek was recognised as a grand- master for his results in former years. Two weeks ago, at the age of 83, after several years of illness, he died. GolombeK proba- bly did more than anyone else to encour- age chess in England from the mid-1940s to the end of the 1970s. His last major tournament came at Kecskemet in 1968, but in a prior career of over three decades he thrice won the British Championship, played a near-record 115 games for England in chess Olympiads and for many years could boast to be the only English- man ever to have penetrated as far as the Interzonal stage of the world champi- onship. Through his lucid writings, particu- larly his books on Capablanca and Rai, which were classics, he brought the drama of chess alive and his work for the Friends of Chess provided inspiration and material support for a host of young players. As a true student of Capablanca, Golombek, when playing at his best, had a style which exhibited an effortless ease in converting positional advantages into crushing attacks. Golombek—Norman-Hansen: Margate 1937; Queen's Indian Defence.