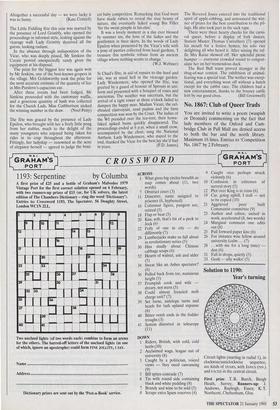 Malvedos 1979 Vintage Port for the first correct solution opened on 6 February, with two runners-up prizes of £15 (or, for UK solvers, the latest edition of The Chambers Dictionary – ring the word `Dictionary'). Entries to: Crossword 1193, The Spectator, 56 Doughty Street, London WC1N 2LL.

Two unclued lights (of two words each) combine to form an arena for the others. The barred-off letters of the unclued lights (in one of which, ignore an apostrophe) could form FINE JOLLITY, I SAY.

Name Address Dictionary prizes are sent out by the 'Post-a-Book' service. ACROSS 1 What gives big circles breadth as map comes about (11, two words) 7 Obstruct court (3) 11 Dissenter, name assigned to prisoner (6, hyphened) 16 Columnar figure, pungent ace, retired (5) 18 Flap or beat (5) 20 Kiss, soft, that's bit of a peck to Jock (6) 22 Folly of one in city — do differently (7) 29 Lumberjacks make us fall about in revolutionary series (5) 30 Hiss madly about Chinese cabbage soups (6)

36 Pulled back from tor, numinous height (5)

2 Acclaimed wags, league out of university (8)

3 Caught by a politician, voiced views — they need canvassing (9)

Circuit lights (starting in radial 1), in clockwise/anticlockwise sequence, are kinds of YEARS, with JANUS (rev.) and FACED in the central circuit.