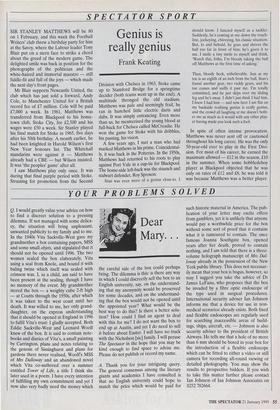 SIR STANLEY MATTHEWS will be 80 on 1 February, and this week the Football Writers' club threw a birthday party for him at the Savoy, where the Labour leader Tony Blair put on a stern face to strike a chord about the greed of the modern game. The delighted smile was back in position for the photographs of the politician and the white-haired and immortal maestro — still fiddle-fit and full of the joys — which made the next day's front pages.

Mr Blair supports Newcastle United, the club which has just sold a forward, Andy Cole, to Manchester United for a British record fee of £7 million. Cole will be paid £7,000 a week. In 1961, Matthews was transferred from Blackpool to his home- town club, Stoke City, for £2,500 and his wages were £50 a week. Sir Stanley played his final match for Stoke in 1965, five days after his 50th birthday. A month earlier, he had been knighted in Harold Wilson's first New Year honours list. The Whitehall mandarins were against it — Matthews already had a CBE — but Wilson insisted. It was 'the peoples' game' after all.

I saw Matthews play only once. It was during that final purple period with Stoke. Straining for promotion from the Second Division with Chelsea in 1963, Stoke came up to Stamford Bridge for a springtime decider (both teams went up in the end). A multitude thronged the old stadium. Matthews was pale and seemingly frail, he ran in hunched little electric darts and dabs. It was simply entrancing. Even more than us, he mesmerised the young blood at full-back for Chelsea called McCreadie. He won the game for Stoke with his dribbles, his passing, his vision. A few years ago, I met a man who had marked Matthews in his prime. Coincidental- ly, it was back in the Potteries. In the 1950s, Matthews had returned to his roots to play against Port Vale in a cup-tie for Blackpool. The home-side left-back was the staunch and stalwart defender, Roy Sproson:

Stan was even more of a genius close-to. I should know. I fancied myself as a tackler. Suddenly, he's coming at me down the touch- line, jockeying, chivvying, his classic situation. But, lo and behold, he goes and shoves the ball too far in front of him; he's given it to me. I smile a tiny smile to myself and think, `Watch this, folks, I'm bloody taking the ball off Matthews at the first time of asking.'

Then, bloody heck, unbelievable. Just as my toe is an eighth of an inch from the ball, Stan's found another gear, two ruddy gears, and his toe comes and sniffs it past me. I'm totally committed, and he just skips over my sliding leg and he's away. I didn't just think I had him, I knew I had him — and now here I am flat on my backside realising genius is really genius, and the crowd all laughing at me doesn't both- er me as much as it would with any other play- er having made you look such a fool.

In spite of often intense provocation, Matthews was never sent off or cautioned throughout his long career. He was the only 50-year-old ever to play in the First Divi- sion. For most of his career, he earned the maximum allowed — £12 in the season, £10 in the summer. When some hobbledehoy player at Blackpool objected that he was only on rates of £12 and £8, he was told it was because Matthews was a better player.