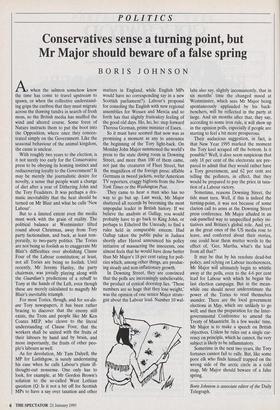 Conservatives sense a turning point, but Mr Major should beware of a false spring

Awhen the salmon somehow know the time has come to travel upstream to spawn, or when the collective understand- ing grips the caribou that they must migrate across the thawing tundra in search of fresh moss, so the British media has snuffed the wind and altered course. Some force of Nature instructs them to put the boot into the Opposition, where once they concen- trated simply on the Government. Like the seasonal behaviour of the animal kingdom, the cause is unclear.

With roughly two years to the election, is it not surely too early for the Conservative press to be obeying its homing instinct and rediscovering loyalty to the Government? It may be merely the journalistic desire for novelty, a sense that people want a change of diet after a year of Dithering John and the Tory Feudsters. It was perhaps a dra- matic inevitability that the heat should be turned on Mr Blair and what he calls 'New Labour'.

But to a limited extent even the media must work with the grain of reality. The political balance at Westminster tilted round about Christmas, away from Tory party factionalism, and back, at least tem- porarily, to two-party politics. The Tories are not being so foolish as to exaggerate Mr Blair's difficulties over abolishing Clause Four of the Labour constitution; at least, not all Tories are being so foolish. Until recently, Mr Jeremy Hanley, the party chairman, was jovially playing along with the Guardian's predictions of a rebuff to Tony at the hands of the Left, even though these are merely calculated to magnify Mr Blair's inevitable triumph.

For most Tories, though, and for soi-dis- ant Tory newspapers, it has been rather bracing to discover that the enemy still exists, the Trots and people like Mr Ken Coates MEP, who cleave to the literal understanding of Clause Four, that the workers shall be united with the fruits of their labours by hand and by brain, and more importantly, the fruits of other peo- ple's labours as well, As for devolution, Mr Tam Dalyell, the MP for Linlithgow, is surely understating his case when he calls Labour's plans ill- thought-out nonsense. One only has to look, for example, at Mr Gordon Brown's solution to the so-called West Lothian question (0: Is it not a bit off for Scottish MPs to have a say over taxation and other matters in England, while English MPs would have no corresponding say in a new Scottish parliament?). Labour's proposal for consoling the English with new regional assemblies for Wessex and Mercia and so forth has that slightly fruitcakey feeling of the good old days. Ho, ho, ho: step forward Theresa Gorman, prime minister of Essex.

So it must have seemed that now was as promising a moment as any to announce the beginning of the Tory fight-back. On Monday John Major summoned the world's press to the state dining room in Downing Street, and more than 100 of them came, not just the creatures of Fleet Street, but the magnificos of the foreign press: affable Germans in tweed jackets, svelte' American TV reporters, craggy bigfoots from the New York Times or the Washington Post.

They came to hear a man who has no way to go but up. Last week, Mr Major shattered all records by becoming the most unpopular leader in British history. If we believe the analysts at Gallup, you would probably have to go back to King John, or perhaps to Ethelred the Unready, to find a ruler held in comparable esteem. Had Gallup taken the public pulse in Judaea shortly after Herod announced his policy initiative of massacring the innocents, one almost feels that he would have done better than Mr Major's 18 per cent rating for poli- cies which, among other things, are produc- ing steady and non-inflationary growth.

In Downing Street, they are convinced that the polls are increasingly unbelievable, the product of cynical doorstep lies. 'These numbers are so huge that they lose weight,' was the opinion of one senior Major strate- gist about the Labour lead. Number 10 wal- lahs also say, slightly inconsistently, that in six months' time the changed mood at Westminster, which sees Mr Major being spontaneously applauded by his back- benchers, will be reflected in the party at large. And six months after that, they say, according to some iron rule, it will show up in the opinion polls, especially if people are starting to feel a bit more prosperous.

Their audacious suggestion, in fact, is that New Year 1995 marked the moment the Tory keel scraped off the bottoni. Is it possible? Well, it does seem suspicious that only 18 per cent of the electorate are pre- pared to admit that they would rather have a Tory government, and 62 per cent are telling the pollsters, in effect, that they would be prepared to pay the price in taxa- tion of a Labour victory.

Sometime, reasons Downing Street, the tide must turn. Well, if this is indeed the turning-point, it was not because of some clarion call to arms at the Downing Street press conference. Mr Major alluded in an oak-panelled way to unspecified policy ini- tiatives and Britain's global role. And yet, as the great ones of the US media rose to leave, and conferred about their stories, one could hear them mutter words to the effect of, 'Gee, Martha, what's the lead from all that?'

It may be that by his resolute dead-bat policy, and relying on Labour incoherences, Mr Major will ultimately begin to whittle away at the polls, even to the 4-6 per cent lead for Labour with which he began the last election campaign. But in the mean- while one should never underestimate the power of the Tories to rend themselves asunder. There are the local government elections in May, which are unlikely to go well; and then the preparation for the Inter- governmental Conference to amend the Treaty of Maastricht. In a few weeks' time, Mr Major is to make a speech on British objectives. Unless he rules out a single cur- rency on principle, which he cannot, the very subject is likely to be inflammatory.

Sometime in the next two years, the Tory fortunes cannot fail to rally. But, like some poor elk who finds himself trapped on the wrong side of the arctic circle in a cold snap, Mr Major should beware of a false spring.

Boris Johnson is associate editor of the Daily Telegraph.