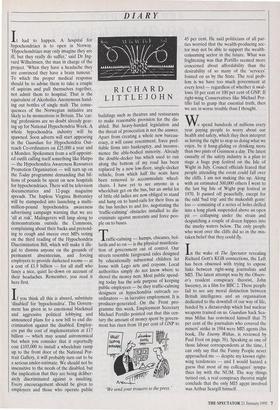 RICHARD LITTLEJOHN It had to happen. A hospital for hypochondriacs is to open in Norway. `Hypochondriacs may only imagine they are ill, but they really do suffer,' said Dr Ing- yard Wilhelmsen, the man in charge of the project. 'When they have a headache they are convinced they have a brain tumour.' To which the proper medical response should be to advise them to take a couple of aspirins and pull themselves together, not admit them to hospital. That is the equivalent of Alcoholics Anonymous hand- ing out bottles of single malt. The conse- quences of the Norwegian initiative are likely to be momentous in Britain. The 'car- ing' professions are no doubt already gear- ing up for National Hypochondria Week. A whole hypochondria industry will be spawned. Soon adverts will start appearing in the Guardian for Hypochondria Out- reach Co-ordinators on £25,000 a year and a Mondeo. Spokesmen from a self-appoint- ed outfit calling itself something like Harpo — the Hypochondria Awareness Resources Promotion Organisation — will turn up on the Today programme demanding that bil- lions of pounds be spent on new hospitals for hypochondriacs. There will be television documentaries and 12-page magazine spreads. The hapless Virginia Bottomley will be stampeded into launching a multi- million-pound hypochondria awareness advertising campaign warning that we are `all at risk'. Malingerers will limp along to demonstrations outside the Commons, complaining about their backs and pretend- ing to cough and sneeze over MPs voting on the third reading of the Hypochondria Discrimination Bill, which will make it ille- gal to dismiss anyone on the grounds of permanent absenteeism, and forcing employers to provide darkened rooms — at a cost of £1.9 billion — for all staff who fancy a nice, quiet lie-down on account of their headaches. Remember, you read it here first.

If you think all this is absurd, substitute `disabled' for 'hypochondria'. The Govern- ment has given in to emotional blackmail and aggressive political lobbying and announced plans for a new bill to end dis- crimination against the disabled. Employ- ers put the cost of implementation at £17 billion — which may sound astronomical but when you consider that it reportedly cost £103,000 to install a wheelchair ramp up to the front door of the National Por- trait Gallery, it will probably turn out to be a serious under-estimate. We should not be insensitive to the needs of the disabled, but the implication that they are being deliber- ately discriminated against is insulting. Every encouragement should be given to employers and those who operate public buildings such as theatres and restaurants to make reasonable provision for the dis- abled. But heavy-handed legislation and the threat of prosecution is not the answer. Apart from creating a whole new bureau- cracy, it will cause resentment, force prof- itable firms into bankruptcy, and inconve- nience the able-bodied minority. Already the double-decker bus which used to run along the bottom of my road has been replaced by a new low-floor, single-decker vehicle, from which half the seats have been removed to accommodate wheel- chairs. I have yet to see anyone in a wheelchair get on the bus, but an awful lot of little old ladies are now obliged to stand and hang on to hand-rails for their lives as the bus lurches to and fro, negotiating the `traffic-calming' obstacles installed to dis- criminate against motorists and force peo- ple on to buses.

raffic-calming — humps, chicanes, bol- lards and so on — is the physical manifesta- tion of government out of control. Our streets resemble fairground rides designed by educationally subnormal children let loose with Lego sets and crayons. Local authorities simply do not know where to shovel the money next. Most public spend- ing today has the sole purpose of keeping public employees — be they traffic-calming designers or hypochondria outreach co- ordinators — in lucrative employment. It is producer-generated. On the Frost pro- gramme this week, Employment Secretary Michael Portillo pointed out that this cen- tury the amount of money spent by govern- ment has risen from 10 per cent of GNP to We send your trousers to the press.' 45 per cent. He said politicians of all par- ties worried that the wealth-producing sec- tor may not be able to support the wealth- consuming sector in the future. What was frightening was that Portillo seemed more concerned about affordability than the desirability of so many of the 'services' foisted on us by the State. The real prob- lem is we have too much government at every level — regardless of whether it swal- lows 10 per cent or 100 per cent of GNP. If right-wing Conservatives like Michael Por- tillo fail to grasp that essential truth, then we are in worse trouble than I thought.

We spend hundreds of millions every year paying people to worry about our health and safety, which they then interpret as having the right to stop us doing what we enjoy, be it hang-gliding or drinking more than two pints of Guinness a day. The latest casualty of the safety industry is a plan to stage a huge pop festival on the Isle of Wight in July. Council officials feared that people attending the event could fall over the cliffs. I am not making this up. Along with an estimated 500,000 others I went to the last big Isle of Wight pop festival in 1970. It passed off peacefully, except for the odd tad trip' and the makeshift gents' be — consisting of a series of holes drilled into a long plank suspended above an open pit — collapsing under the strain and despatching a couple of dozen hippies into the murky waters below. The only people who went over the cliffs did so in the mis- taken belief that they could fly.

In the wake of The Spectator revealing Richard Gott's KGB connections, the Left has been obsessed with trying to expose links between right-wing journalists and MI5. The latest attempt was by the Observ- er's resident conspiracy theorist, John Sweeney, in a film for BBC 2. These people fail to see any moral distinction between British intelligence and an organisation dedicated to the downfall of our way of life, funded by a dictatorship which had nuclear weapons trained on us. Guardian hack Sea- mus Milne has convinced himself that 75 per cent of the journalists who covered the miners' strike in 1984 were MI5 agents (his book, The Enemy Within, is reviewed by Paul Foot on page 38). Speaking as one of those labour correspondents at the time, I can only say that the Funny People never approached me — despite my known right- wing tendencies — and I would hazard a guess that most of my colleagues' sympa- thies lay with the NUM. The way things turned out, a real conspiracy theorist might conclude that the only MI5 agent involved was Arthur Scargill himself.