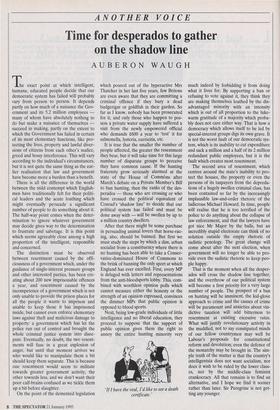 Time for desperados to gather on the shadow line

he exact point at which intelligent, humane, educated people decide that our democratic system has failed will probably vary from person to person. It depends partly on how much of a nuisance the Gov- ernment and its 5.2 million employees many of whom have absolutely nothing to do but make a nuisance of themselves succeed in making, partly on the extent to which the Government has failed in certain of its most elementary functions, like pro- tecting the lives, property and lawful diver- sions of citizens from each other's malice, greed and bossy interference. This will vary according to the individual's circumstances, but it is not quite the same thing as the ear- lier realisation that law and government have become more a burden than a benefit.

There is all the difference in the world between the mild contempt which English- men have traditionally felt for their politi- cal leaders and the acute loathing which might eventually persuade a significant number of people to do something about it. The half-way point comes when the deter- mination to ignore whatever government may decide gives way to the determination to frustrate and sabotage. It is this point which seems agreeably close among a high proportion of the intelligent, responsible and concerned.

The distinction must be observed between resentment caused by the offi- ciousness of a government which, under the guidance of single-interest pressure groups and other interested parties, has been cre- ating about 200 new imprisonable offences a year, and resentment caused by the incompetence of a government which is not only unable to provide the prison places for all the people it wants to imprison and unable to keep those it has imprisoned inside, but cannot even enforce elementary laws against theft and malicious damage to property: a government which has let the police run out of control and brought the whole criminal justice system into disre- pute. Eventually, no doubt, the two resent- ments will fuse in a great explosion of anger, but until that moment arrives we who would like to manipulate them a bit should keep them separate. This is because one resentment would seem to militate towards greater government activity, the other towards less, and we don't want their poor calf-brains confused as we tickle them up a bit before slaughter.

On the point of the demented legislation which poured out of the hyperactive Mrs Thatcher in her last five years, few Britons are even aware that they are committing a criminal offence if they bury a dead budgerigar or goldfish in their garden. So far as I know, nobody has been prosecuted for it, and only those who happen to pos- sess a private water supply have suffered a visit from the newly empowered official who demands £600 a year to 'test' it for salmonella, lysteria, currieitis, etc.

It is true that the smaller the number of people affected, the greater the resentment they bear, but it will take time for this large number of disparate groups to perceive they have common cause. If the hunting fraternity grow seriously alarmed at the state of the House of Commtms after March's debate on a Private Member's Bill to ban hunting, then the ranks of the des- perados — those who are crossing or who have crossed the political equivalent of Conrad's 'shadow line' to decide that our political system has failed and must be done away with — will be swollen by up to a million country dwellers.

After that there might be some purchase in persuading animal lovers that horse-rac- ing, also, should be banned. But first we must study the steps by which a dim, urban socialist from a constituency where there is no hunting has been able to take a Conser- vative-dominated House of Commons to the brink of banning the only sport at which England has ever excelled. First, every MP is deluged with letters and representations from the anti-bloodsports lobby. This, com- bined with worthless opinion polls which cannot measure either the honesty or the strength of an opinion expressed, convinces the dimmer MPs that public opinion is opposed to blood sports.

Next, being low-grade individuals of little intelligence and no liberal education, they proceed to suppose that the support of public opinion gives them the right to annoy the entire hunting minority very

'If I have the veal, I'd like to see a death certificate.'

much indeed by forbidding it from doing what it lives for. By supporting a ban or refusing to vote against it, they think they are making themselves loathed by the dis- advantaged minority with an intensity which is out of all proportion to the luke- warm gratitude of a majority which proba- bly does not care either way. That is how a democracy which allows itself to be led by special-interest groups digs its own grave. It is not the worst fault of our democratic sys- tem, which is its inability to cut expenditure and sack a million and a half of its 2 million redundant public employees, but it is the fault which creates most resentment.

The second area of resentment, which centres around the state's inability to pro- tect the houses, the property or even the persons of its taxpayers from the depreda- tions of a hugely swollen criminal class, has been contained so far by the increasingly implausible law-and-order rhetoric of the ludicrous Michael Howard. In time, people will realise that he is too terrified of the police to do anything about the collapse of law enforcement, and that the lawyers have got nice Mr Major by the balls, but an incredibly stupid electorate can think of no solution outside the empty rhetoric of sadistic penology. The great change will come about after the next election, when government will no longer be able to pro- vide even the sadistic rhetoric to keep peo- ple happy.

That is the moment when all the desper- ados will cross the shadow line together, and the overthrow of our political system will become a first priority for a very large number of people. The prospect of a ban on hunting will be imminent, the kid-glove approach to crime and the causes of crime will be paramount and anxieties about vin- dictive taxation will add bitterness to resentment at existing excessive rates. What will justify revolutionary activity in the muddled, not to say constipated minds of our fellow countrymen may well be Labour's proposals for constitutional reform and devolution; even the defence of the monarchy may be brought in. The sim- ple truth of the matter is that the country's intelligentsia does not want socialism, nor does it wish to be ruled by the lower class- es, nor by the middle-class feminist crankocracy. All that remains is to find an alternative, and I hope we find it sooner rather than later. Sir Peregrine is not get- ting any younger.