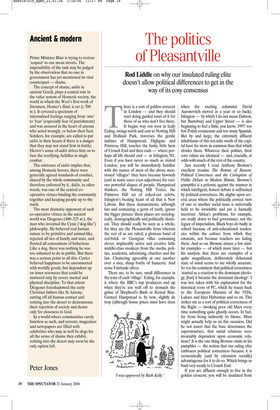 The politics of Pleasantville

Rod Liddle on why our insulated ruling elite doesn’t allow political differences to get in the way of its cosy consensus There is a sort of golden crescent in London — and they should start doing guided tours of it for those of us who don’t live there. It begins way out west in leafy Ealing, swings north and east to Notting Hill and Holland Park, traverses the gentle inclines of Hampstead, Highgate and Primrose Hill, touches the funky little hem of Crouch End and then ends — where perhaps all life should end — in Islington, N1. Even if you have never so much as visited London, you will be immediately familiar with the names of most of the above mentioned ‘villages’: they have become bywords (and in some cases even adjectives) for various powerful cliques of people: Hampstead thinkers, the Notting Hill Tories, the Primrose Hill set of coked-out celebs, Islington’s beating heart of all that is New Labour. But these demarcations, although fun and containing a germ of truth, ignore the bigger picture: these places are sociologically, demographically and politically identical. They should really be seen as a whole, for they are the Pleasantville from wherein the rest of us are ruled; a glorious band of red-brick or Georgian villas containing clever, implacably active and creative little middle-class monkeys from the media, politics, academia, advertising, charities and the law. Chattering agreeably at one another over a nice, sharp bottle of Sancerre. And some Fairtrade olives.

There are, to be sure, small differences in the tone of each ‘village’. Ealing, for example, is where the BBC’s top producers end up when they’re too well off to stomach the grime of Shepherd’s Bush or Kensal Rise. Genteel Hampstead is, by now, slightly de trop (although house prices must have risen when the exciting columnist David Aaronovitch moved in a year or so back). Islington — by which I do not mean Dalston, but Barnsbury and Upper Street — is also beginning to feel a little, you know, 1997: too few Polish restaurants and too many Spanish. But by and large, the extremely affluent inhabitants of this ten-mile swath of the capital have far more in common than that which divides them. Whatever their politics, their core values are identical — and, crucially, at odds with much of the rest of the country.

Just recently I read Anthony Browne’s excellent treatise The Retreat of Reason: Political Correctness and the Corruption of Public Debate in Modern Britain. Browne’s pamphlet is a polemic against the manner in which intelligent, honest debate is suffocated by political correctness. He alights upon several areas where the politically correct view of one or another social issue is universally held to be inviolable and yet is factually incorrect. Africa’s problems, for example, are really down to bad governance, not the legacy of imperialism. Black boys do badly in school because of anti-educational tendencies within the culture from which they emanate, not because teachers are failing them. And so on. Browne misses a few similar examples — of which more later — but his analysis, that these are examples of a quite magnificent, deliberately delusional state of mind seems to me wholly accurate. So too his comment that political correctness ‘started as a reaction to the dominant ideology, [but] it became the dominant ideology’. I was less taken with his explanation for the historical roots of PC, which he traces back to the European Marxists of the 1920s, Lukacs and later Habermas and so on. This strikes me as a sort of political correctness of the Right — invoking poor old Marx every time something quite ghastly occurs. In fact, far from being indirectly to blame, Marx might actually help us on this occasion. Did he not assert that the base determines the superstructure, that social relations were invariably dependent upon economic relations? It is the one thing Browne omits in his pamphlet — the notion that our ruling elite embraces political correctness because it is economically (and by extension socially) advantageous for it to do so. Which brings us back very neatly to Crouch End.

If you are affluent enough to live in the golden crescent, you will be insulated from the terrible woes visited upon us by mass immigration, multiculturalism and the like: further to that, you will actually benefit from them. Your experience of the immigrant community will be limited to the astonishingly cheap Polish nanny or cleaner you now employ — ‘she has a PhD from Katowice university, you know’ — and the staff of a few of quite the most delectable restaurants on the high street. You will know plenty of Asian and black British people, however and quite probably pride yourself on so doing. There’s Marvin, who runs an account at OB&M, for example, or Parminder, who worked on that BBC2 programme about amphetamines. Your multiracial friends, by and large, have precisely the same political and social disposition as you. They will not stab you for your wallet, blow themselves up outside your place of work or insist that we wipe Israel off the map. (Employ economic sanctions against it, maybe, but not actually kill everyone there.) Your toddlers will not be required to undertake painful shots against TB as they do a few miles away in my manor, Southwark and Bermondsey, and in Tower Hamlets — and you may still cleave to the view that TB is, as the PC view disingenuously has it, ‘a disease of poverty’ rather than an illness entirely imported from the Third World. When your children go to school they will not be the only white faces in their classes and you might tell yourself, reassuringly — bearing Marvin and Parminder in mind — that you really wouldn’t mind if they were: after all, we’re all the same, aren’t we? (Forgetting for a moment that Marvin and Parminder are pretty fluent in the English language and their children don’t wear sackcloth and ashes for reasons of religious dogma.) You will walk along the high street and exult in the exotic difference, the profusion of nationalities plying their wares (though you’ll be grateful there’s still a nice European deli). You won’t resent the fact that your neighbourhood has been transformed beyond all recognition and that you are in unfamiliar territory — because it’s been transformed in a nice way and, in any case, it’s not really, if we’re honest, your neighbourhood at all, is it? Your family’s from Beaconsfield, isn’t it? You only moved to Notting Hill six years ago. Hey, come to think of it, we’re all immigrants, you know?

I am overstating the case, I suppose. In a sense, what has happened in the golden crescent is wholly desirable: a multiracial community striving ever upwards, its elements at peace with one another. But don’t kid yourself it’s a multicultural community: it ain’t. Nor that by having a couple of black friends you’re down with the brothers on the street. Immigration can indeed mean an easily assimilated, highly educated smattering of foreigners contributing to the wellbeing of an area. But for the majority of those who have suffered its iniquities, it can be tens of thousands of impoverished, uneducated people deposited en masse in the middle of a similarly impoverished indigenous white community with whom they compete for jobs and to whom they are culturally antithetical. We like living with people who are like us: that’s why you get on with Parminder and Marvin. And it’s why there is frequently racial conflict in Oldham, Blackburn, Bradford, Leeds, and why the BNP got more than 20 per cent of the vote in Dagenham at the last election.

The root cause of political correctness is, in almost every aspect, a factor of the economic advantage that this confused ideology confers upon a tiny minority of the population. If you work for a single-issue pressure group agitating for better rights for Bengalis, equal employment opportunities for women, more ramps for the disabled, civil partnerships for homosexuals, rights for lunatics not to be called lunatics, you do not stop agitating when those perhaps laudable battles have been won. If you did that, you’d be out of a job, for a start. You’d have to buy the Guardian and work through those capacious jobs pages once again. So instead you battle ever onward, regardless of the fact that the balance has long since been tipped overwhelmingly in your favour and that your organisation should really do nothing more energetic than disband; instead you agitate for more and more and trouser the government grants. Have you ever heard of a pressure group saying, ‘Well, um, we’ve got everything we wanted. You know, I think we’ll call it a day.’ They don’t do that sort of thing.

It’s not neo-Marxism; it is pure, untrammelled self-interest. Take a walk around London’s golden crescent. Soak up the atmosphere. And then tell me it isn’t so.