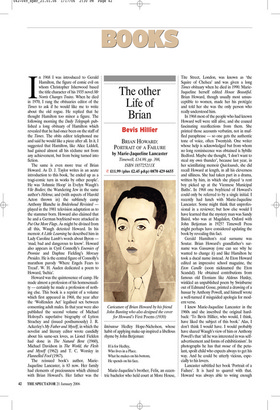 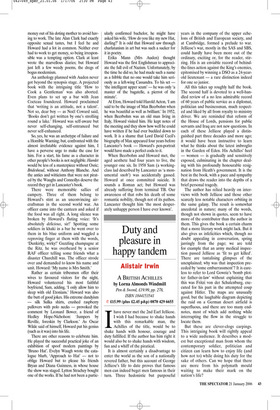 The other Life of Brian

BRIAN HOWARD: PORTRAIT OF A FAILURE by Marie-Jaqueline Lancaster Timewell, £14.99, pp. 398, ISBN 185725211X ✆ £11.99 (plus £2.45 p&p) 0870 429 6655 In 1968 I was introduced to Gerald Hamilton, the figure of comic evil on whom Christopher Isherwood based the title character of his 1935 novel Mr Norris Changes Trains. When he died in 1970, I rang the obituaries editor of the Times to ask if he would like me to write about the old rogue. He replied that he thought Hamilton too minor a figure. The following morning the Daily Telegraph published a long obituary of Hamilton which revealed that he had once been on the staff of the Times. The obits editor telephoned me and said he would like a piece after all. In it, I suggested that Hamilton, like Alice Liddell, had gained almost all his réclame not from any achievement, but from being turned into fiction.

The same is even more true of Brian Howard. As D. J. Taylor writes in an acute introduction to this book, ‘he ended up as a tragi-comic turn in works by other people’. He was ‘Johnnie Hoop’ in Evelyn Waugh’s Vile Bodies; the Wandering Jew in the same author’s Helena; and (with aspects of Harold Acton thrown in) the sublimely camp Anthony Blanche in Brideshead Revisited played in the 1981 television adaptation as to the stammer born. Howard also claimed that he and a German boyfriend were attacked in Put Out More Flags. As might be divined from all this, Waugh detested Howard. In his memoir A Little Learning he described him in Lady Caroline Lamb’s words about Byron — ‘mad, bad and dangerous to know’. Howard also appears in Cyril Connolly’s Enemies of Promise and Daphne Fielding’s Mercury Presides. He is the central figure of Connolly’s marathon parody ‘Where Engels Fears to Tread’. W. H. Auden dedicated a poem to Howard, ‘Ischia’.

Howard was the quintessence of camp. He made almost a profession of his homosexuality — certainly he made a profession of nothing else. This book is a reprint of a volume which first appeared in 1968, the year after the ‘Wolfenden Act’ legalised sex between consenting adult males. In that year were also published the second volume of Michael Holroyd’s superlative biography of Lytton Strachey and (issued posthumously) J. R. Ackerley’s My Father and Myself, in which the novelist and literary editor wrote candidly about his same-sex loves, as Lionel Fielden had done in The Natural Bent (1960), Michael Davidson in The World, the Flesh and Myself (1962) and T. C. Worsley in Flannelled Fool (1967).

The reissued book’s author, MarieJaqueline Lancaster, is 83 now. Her family had elements of preciousness which chimed with Brian Howard’s. Her father was the littérateur Hedley Hope-Nicholson, whose habit of applying make-up inspired a libellous rhyme by John Betjeman:

H is for Hedley, Who lives in a Place.

What he makes on his bottom, He spends on his face.

Marie-Jaqueline’s brother, Felix, an eccentric bachelor who held court at More House, Tite Street, London, was known as ‘the Squire of Chelsea’ and was given a long Times obituary when he died in 1990. MarieJaqueline herself edited House Beautiful. Brian Howard, though usually most unsusceptible to women, made her his protégée and told her she was the only person who really understood him.

In 1968 most of the people who had known Howard well were still alive, and she coaxed fascinating recollections from them. She printed those accounts verbatim, not in muffled paraphrase — so one gets the authentic tone of voice, often Twentyish. One writer whose help is acknowledged but from whom no long reminiscence was obtained is Sybille Bedford. Maybe she thought, ‘I don’t want to steal my own thunder’, because last year, in her scintillating memoir Quicksands, she did recall Howard at length, in all his cleverness and silliness. She had taken part in a drama, written by him, in which she played ‘a rent boy picked up at the Viennese Municipal Baths’. In 1968 one boyfriend of Howard’s could only be referred to by a single initial. I recently had lunch with Marie-Jaqueline Lancaster. Some might think that unprofessional in a reviewer; but how else would I have learned that the mystery man was Sandy Baird, who was at Magdalen, Oxford with John Betjeman in 1925? Timewell Press might perhaps have considered updating the book by revealing this fact.

Gerald Hamilton’s real surname was Soutar. Brian Howard’s grandfather’s surname was Gassaway (one can see why he wanted to change it) and like Hamilton he took a ducal name instead. At Eton Howard edited an impressive school magazine, the Eton Candle (soon nicknamed the Eton Scandal). He obtained contributions from famous old Etonians like Aldous Huxley, winkled an unpublished poem by Swinburne out of Edmund Gosse, printed a drawing of a hussar by Anthony Powell, and himself wrote a well-turned if misguided apologia for modern verse.

I knew Marie-Jaqueline Lancaster in the 1960s and she inscribed the original hardback: ‘To Bevis Hillier, who would, I think, have liked the subject of this book.’ Alas, I don’t think I would have. I would probably have shared Waugh’s view of him or Anthony Powell’s that ‘all he was interested in was selfadvertisement and forms of exhibitionism’. In photographs he has that moue of the petulant, spoilt child who expects always to get his way. And he could be utterly vicious, especially to his lovers.

Lancaster subtitled her book ‘Portrait of a Failure’. It is hard to quarrel with that. Howard was always able to wring enough money out of his doting mother to avoid having to work. The late Alan Clark had exactly opposite sexual tastes, but I feel he and Howard had a lot in common. Neither ever had to work to get money, so being irresponsible was a tempting option. Clark at least wrote the marvellous diaries; but Howard just left a few weedy poems, the dregs of bogus modernism.

An anthology planned with Auden never got beyond the synopsis stage. A projected book with the intriguing title ‘How to Cook a Gentleman’ was also aborted. Even plans to set up a bar with Jean Cocteau foundered. Howard proclaimed that ‘writing is an attitude, not a talent’. Not so, dear boy — as Noël Coward said, ‘Books don’t get written by one’s strolling round a lake.’ Howard was self-aware but never self-changing, self-entranced but never self-enhanced.

So, yes, he was an archetype of failure and a Horrible Warning; but, confronted with the almost irrefutable evidence against him, I have a perverse urge to make the case for him. For a start, his fame as a character in other people’s books is not negligible. Hamlet would be less of a masterpiece without Osric; Brideshead, without Anthony Blanche. And the antics and witticisms that were not pirated by the Waughs and Connollys deserve the record they get in Lancaster’s book.

There were memorable sallies of campery. Three of them belong to Howard’s stint as an unconvincing aircraftsman in the second world war. An officer came into the canteen and asked if the food was all right. A long silence was broken by Howard’s fluting voice: ‘It’s absolutely delicious, sir!’ Spotting some soldiers in khaki in a bar he went over to them in his blue uniform and waggled a reproving finger at them with the words, ‘Dunkirky, wirky!’ Guzzling champagne at the Ritz, he was overheard by a senior RAF officer telling some friends what a disaster Churchill was. The officer strode over and demanded to know his name and unit. Howard: ‘My name is Mrs Smith.’ Rather as certain tribesmen offer their wives to favoured visitors for the night, Howard volunteered his most faithful boyfriend, Sam, adding, ‘I only allow him to sleep with old Etonians.’ Howard was also the butt of good jokes. His extreme dandyism — silk Sulka shirts, crushed raspberry pullovers with polo necks — provoked the comment by Leonard Bower, a friend of Hedley Hope-Nicholson: ‘Jumpers by Reville, foreskin by Clarkson.’ As Oscar Wilde said of himself, Howard put his genius (such as it was) into his life.

There are other reasons to celebrate him. He played the successful practical joke of an exhibition of spoof modern paintings by ‘Bruno Hat’. Evelyn Waugh wrote the catalogue blurb, ‘Approach to Hat’ — not to oblige Howard but to please his friends Bryan and Diana Guinness, in whose house the show was staged. Lytton Strachey bought one of the works. If he had not been a partic ularly confirmed bachelor, he might have asked his wife, ‘How do you like my new Hat, darling?’ It is odd that Howard saw through charlatanism in art but was such a sucker for it in poetry.

Erika Mann (Mrs Auden) thought Howard was the first Englishman to appreciate the full evil of Nazism. Unfortunately, by the time he did so, he had made such a name as a fribble that no one would take him seriously as a left-wing Cassandra. To his set — ‘the intelligent upper scum’ — he was only ‘a master of the bagatelle, a pierrot of the minute’.

At Eton, Howard told Harold Acton, ‘I am said to be the image of Max Beerbohm when he was beautiful as well as brilliant.’ In 1952, when Beerbohm was an old man living in Italy, Howard visited him. He kept notes of the meeting and they show how well he could have written if he had ever buckled down to work. It is a shame that Lord David Cecil’s biography of Max appeared four years before Lancaster’s book — Howard’s pen-portrait would have made a perfect coda to it.

When Beerbohm and Howard met, the aged aesthete had four years to live, the younger one six. In 1958 Sam (a workingclass lad described by Lancaster as ‘a monumental snob’) was accidentally gassed. Howard at once committed suicide. It sounds a Roman act; but Howard was already suffering from terminal TB. Our awareness of that robs his death of some romantic nobility, though not of its pathos. Lancaster thought him ‘the most desperately unhappy person I have ever known’.