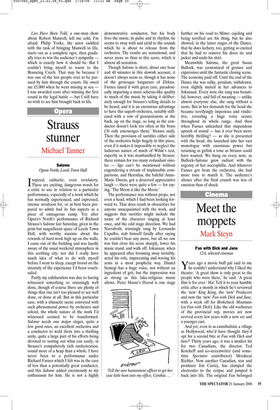 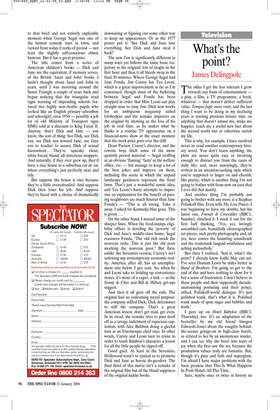 Fun with Dick and Jane 12A, selected cinemas Years ago a movie buff pal said to me he couldn’t understand why I liked the theatre. ‘A great show is only great to the people who were there,’ he said. ‘A great film is for ever.’ Ha! Tell it to your humble critic after a month in which he’s reviewed the ‘new’ King Kong, the ‘new’ Producers and now the ‘new’ Fun with Dick and Jane, with a week off for Brokeback Mountain (or Fun with Dick). Like the old warhorses of the provincial rep, movies are now revived every few years with a new set and a younger cast.

And yet, even in as cannibalistic a village as Hollywood, who’d have thought they’d opt for a second bite at Fun with Dick and Jane? Thirty years ago, it was a modest hit for two Canadians, the director Ted Kotcheff and co-screenwriter (and sometime Spectator contributor) Mordecai Richler. Now another Canadian, star and producer Jim Carrey, has clamped the electrodes to the corpse and jumped it back into life. The original Fun belonged to that brief and not entirely explicable moment when George Segal was one of the hottest comedy stars in town, and viewed from today it reeks of period — not least the slightly self-conscious ethnic humour. But it has a great premise.

The title comes from a series of American children’s books — Dick and Jane are the equivalent, if memory serves, of the British ‘Janet and John’ books. I hadn’t thought about Janet and John in years, until I was motoring around the Sunni Triangle a couple of years back and began noticing that the triangular road signs warning of impending schools featured two highly non-Arabic pupils who looked like an English primary schoolboy and schoolgirl, circa 1954 — possibly a job lot of old Ministry of Transport signs HMG sold at a discount to King Faisal II. Anyway, that’s Dick and Jane — you know, the sort of thing: See Dick, see Dick run, see Dick run toward Jane, see Jane run to teacher to accuse Dick of sexual harassment ... They’re squeaky clean, white-bread, bland, all-American moppets. And naturally, if they ever grew up, they’d have a nice house in a suburban cul de sac where everything’s just perfectly neat and tidy.

But suppose the house is nice because they’re a little overextended. And suppose Dick then loses his job. And suppose they’re faced with a choice of dramatically downsizing or figuring out some other way to keep up appearances. Or as the 1977 poster put it: ‘See Dick and Jane lose everything. See Dick and Jane steal it back!’ The new Fun is significantly different in many ways yet follows the same basic trajectory as the original: lots of laughs in the first hour and then it all bleeds away in the final 30 minutes. Where George Segal had Jane Fonda, Jim Carrey has Tea Leoni, which is a great improvement as far as I’m concerned, though most of the bickering between Segal and Fonda has been dropped in order that Miss Leoni can play straight man to zany Jim. Dick now works for an ambiguous megacorp called Globodyne and the remake improves on the original by showing us the loss of his job in real time, as he makes what he thinks is a routine TV appearance on a financial-news show at the exact moment that the stock price goes over the cliff.

Dean Parisot, Carrey’s director, and the rewrite boys ditch some of the more quaintly period material — Segal scoffing at an obvious ‘flaming’ ‘fairy’ at the welfare office, etc. — but manage to keep a lot of the best jokes and improve on them, including the scene in which the unpaid landscape gardeners repossess the front lawn. That’s just a wonderful comic idea, and Tea Leoni’s hasty attempts to improvise an explanation for the benefit of passing neighbours are much funnier than Jane Fonda’s — “This is all wrong. Take it away. I asked for Kentucky blue grass. This is green.. . ’ On the other hand, I missed some of the sharper lines. When the food-stamps eligibility officer is deriding the ‘poverty’ of Dick and Jane’s middle-class home, Segal reassures Fonda, ‘The old rich mock the nouveau riche. This is just the old poor mocking the nouveau poor.’ But then, unlike the Seventies version, Carrey’s isn’t satirising any contemporary economic reality: America, after all, has an unemployment rate below 5 per cent. So, when he and Leoni take to holding up convenience stores, it’s more of a caper, a lark — as the Sonny & Cher and Bill & Hillary get-ups suggest.

And then it all goes off the rails. The original had no redeeming moral purpose: the company stiffed Dick; Dick determines to stiff the company. That’s a great American lesson: don’t get mad, get even. In its stead, the remake tries to pass itself off as a savage indictment of rapacious capitalism, with Alec Baldwin doing a gleeful turn as an Enronesque chief exec. In other words, Carrey and Leoni turn to crime in order to teach Baldwin’s character a lesson for all the little people he ripped off.

Good grief. At least in the Seventies, Hollywood wasn’t so cynical as to promote Dick and Jane as heroic do-gooders. The final third of this movie isn’t a remake of the original film but of the bland sappiness of the original kiddie books.