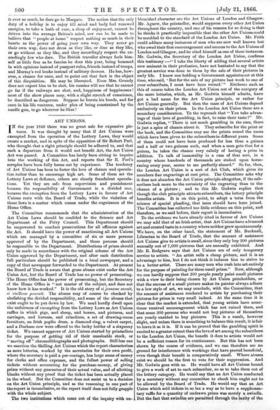 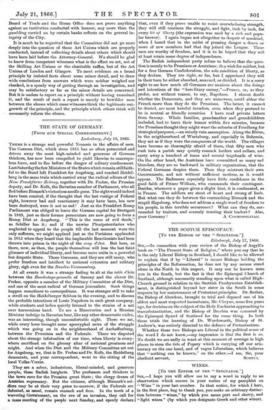 IN the year 1846 there was no great sale for expensive pic- tures. It was thought by many that if Art Unions were exempted from the operation of the Lottery Laws, they would create a market, and in spite of the opposition of Sir Robert Peel, who thought that a right principle should be adhered to, and that such a departure from it would not benefit Art, the Art Union Act was passed. A Committee has lately been sitting to inquire into the working of this Act, and reports that Sir R. Peel's scruples have been fully borne out by experience. The tendency of Art Unions has been to foster the love of chance and specula- tion rather than to encourage high art. Some of them set the Lottery Laws at defiance, others are clearly fraudulent specula- tions. Yet they are safe from supervision and punishment because the responsibility of Government is a divided one, because the exemption from the Lottery Laws in favour of Art Unions rests with the Board of Trade, while the violation of those laws is a matter which comes under the cognizance of the Home Office.

The Committee recommends that the administration of the Art Union Laws should be confided to the Science and Art Department of the Privy Council. This Department should be empowered to conduct prosecutions for all offences against the Act. It should have the power of sanctioning all Art Unions which are managed by a committee of six or more persons approved of by the Department, and these persons should be responsible to the Department. Distributions of prizes should only be made in accordance with the original scheme of the Art Union approved by the Department, and after each distribution full particulars should be published in a local newspaper, and a copy of that newspaper forwarded to the Department. At present the Board of Trade is aware that gross abuses exist under the Art Union Act, but the Board of Trade has no power of prosecuting. The Home Office has the power of prosecuting, but the Secretary of the Home Office is " not master of the subject, and does not know how it has worked." It is the old story of si jeunesse savait, si vieillesse pouvait. The abuses may of course be checked by abolishing the divided responsibility, and some of the abuses that exist ought to be put down by law. We need hardly dwell upon the unfairness of exempting from the Lottery Laws as Art Unions raffles in which pigs, and sheep, and horses, and pictures, and carriages, and harness, and crinolines, a set of drawing-room furniture, an Irish poplin dress, a diamond ring, a velvet carpet, and a Durham cow were offered to the lucky holder of a sixpenny ticket. We cannot approve of Art Unions started by printsellers for the purpose of getting rid of their unsaleable stock, or " moving off " chromolithographs and photographs. Still less can we sanction the Shilling Art Unions which the report characterizes as mere lotteries, worked by the secretaries for their own profit, where the secretary is paid a per-centage, has large sums of money for clerks and office expenses, and the fullest power of selling tickets without accounting for the purchase-money, of giving prizes without any guarantee of their actual value, and of allotting blanks without any proof that the ticket has been actually placed in the wheel. But the Committee does not assist us to a decision on the Art Union principle, and as the reasoning in one part of the report is inconclusive, so the report itself does not fully grapple with the whole subject.

The two institutions which come out of the inquiry with un-

blemished character are the Art Unions of London and Glasgow. Mr. Agnew, the printseller, would suppress every other Art Union throughout the country, and one of his reasons for so doing is that

he thinks it practically impossible that the other Art Unions could be moulded to the standard of the London Art Union. Mr. Frith could adduce many instances of men who are now well known but who owed their first encouragement and success to the Art Unions of London and Glasgow, and he cited himself as one of these instances. Mr. Godwin, the Secretary of the London Art Union, confirms this testimony :—" I take the liberty of adding that several artists now eminent in their profession, have not hesitated to say that the greatest service was done to them by the sale of their pictures in early life. I know one holding a Government appointment at this time, who said, ' But for the sale of my picture last week to one of your subscribers, I must have been ruined." Evidence such as this of course takes the London Art Union out of the category of the mere lotteries, which, as Mr. Godwin himself admits, have got a bad name for the Art Union principle, or rather for Art Unions generally. But then the mass of Art Unions depend exclusively on their prizes. In the London Art Union these are a secondary consideration. To the reproach that " You take advan- tage of their love of gambling, in fact, to raise their taste ?" Mr. Godwin replies, " There is not much gambling in the case, there is just a spice of chance about it. They subscribe for the print or the book, and the Committee may see the prints round the room which have been given to the subscribers in different years Some of them could not have been produced for less than a guinea and a half or two guineas each, and when a man gets that for a. guinea, he takes the chance very calmly of having a prize in addition. To talk of immorality in a case of that sort, in a country where hundreds of thousands are staked upon horse- racing every year, seems to me perfectly absurd." So far, then, the London Art Union is a sort of Art Club, which gives its members fine engravings at cost price. The Committee asks why it does not abandon the Art Union principle altogether, if the sub- scribers look more to the certainty of the engraving than to the chance of a picture ; and to this Mr. Godwin replies that though the club principle attracts subscribers, the lottery principle benefits artists. It is on this point, to adopt a term from the science of special pleading, that issue should have been joined. The Committee has collected too little evidence on this point, and therefore, as we said before, their report is inconclusive.

To the evidence we have already cited in favour of Art Unions we may add that of an Irish artist, that Art Unions have advance& art and created taste in a country where neither grew spontaneously. We have, on the other hand, the statement of Mr. Bucknall, Librarian to the Board of Trade, that the amount of assistance Art Unions give to artists is small, since they only buy 200 pictures. annually out of 7,000 pictures that are annually exhibited. And Mr. R. Redgrave says that Art Unions are of only temporary service to artists. " An artist sells a cheap picture, and it is an advantage to him, but I do not think it induces him to strive to. be a better artist. There are many men who rush into art entirely for the purpose of painting for these small prizes." Now, although we can hardly suppose that 200 people yearly paint small pictures. with a view to their being chosen by Art Union prizeholders, or that the success of a small picture makes its painter always adhere to a low style of art, we may conclude, with the Committee, that the amount of assistance rendered to artists by purchasing their pictures for prizes is very small indeed. At the same time it is- clear that the market is extended, that young artists have some- times received encouragement which has not ruined them, and that some 200 persons who would not buy pictures of themselves are yearly enabled to buy pictures. This is a result, however slight, and unless there is something to balance this result, it is fair to leave it as it is. If it can be proved that the gambling spirit is. excited to a greater extent than the love of art among the subscribers. to the London Art Union, the benefit it does to artists would not be a sufficient reason for its continuance. But this has not been shown by the course of evidence, and we can therefore see no- ground for interference with workings that have proved beneficial,, even though their benefit is comparatively amalL Where abuses exist we should be the first to vote for their suppression. And Mr. Godwin goes with us. He would have all Art Unions bound. to give a work of art to each subscriber, so as to take them out of the lottery category. He would say that an Art Union conducted by a secretary without any committee to check him ought not to. be allowed by the Board of Trade. He would say that an Art. Union which sold tickets in so lax a way as to have a supplemen- tary raffle for a quantity of undrawn prizes was merely a swindle.. But the fact that swindles are permitted through the laxity of the

Board of Trade and the Home Office does not prove anything against an institution conducted with honour, any more than the gambling carried on by certain banks reflects on the general in- tegrity of the City.

It is much to be regretted that the Committee did not go more deeply into the question of those Art Unions which are properly conducted, instead of collecting details about others which should have been laid before the Attorney-General. We should be glad to know from competent witnesses what is the effect on art, not of the Shilling Art Unions or the charitable raffles, but of the Art Unions of London and Glasgow. To meet evidence on a broad principle by isolated facts about some minor detail, and to draw wide conclusions from answers which were neither weighed nor checked, is a speedy way of getting through an investigation, and may be satisfactory so far as the minor details are concerned. But it is useless to report on a principle without having examined it, and the result of such a report is merely to bewilder men between the abuses which some witnesses think the legitimate out- growth of the principle, and the principle which others think will necessarily reform the abuses.