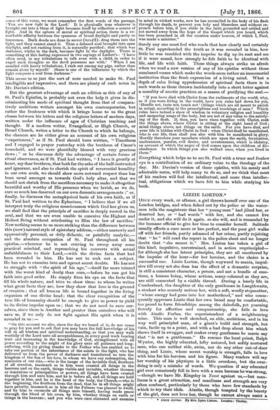 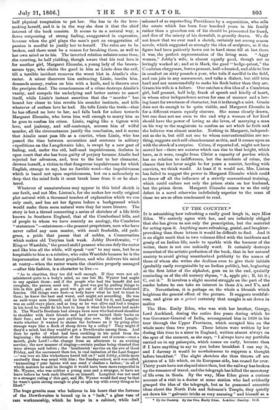 ONCE every week, or oftener, a girl throws herself over one of the London bridges, and when fished out by the police or the water- men tells the magistrate that her " young man " had jilted her, or deserted her, or " had words " with her, and she cannot live under it, and she will do it again, so she will, and is remanded by the humane official to give her time to consider herself. Solitude usually effects a cure more or less perfect, and the poor girl walks off with her friends, partly ashamed of her crime, partly rejoicing that " he " will read the report in the police sheet and no longer doubt that "she meant it." Mrs. Linton has taken a girl of this kind, impulsive, unrestrained, and in action unprincipled— for although she has latent principles, they are all smothered by the impulse of the hour—for her heroine, and the choice is a successful one. Lizzie Lorton, though wayward to mania, impul- sive till every act she does has the effect of a dramatic surprise, is still a consistent character, a person, and not a bundle of emo- tions, a human being, whose actions, many-coloured as they are, are still connected by a visible thread. During a lonely life in Cumberland, the daughter of the only gentleman in Langthwaite, a student who scarcely notices her, with a soft, woolly stepmother, " whose energy had gone into her motherhood," and who conse- quently oppresses Lizzie that her own brood may be comfortable, too proud to form friendships among the dalesfolk, yet yearning fiercely for affection and companionship, she falls in love with Ainslie Forbes, the superintendent of a neighbouring mine. This man is well sketched, an able, ambitious, and in his way well principled man, of a giant's build and strength, but vain, facile up to a point, and with a bad drop about him which shows itself in swagger, and makes every gentleman he meets say that " is not a gentleman." He rescues the local priest, Ralph Wynter, the highly educated, lofty natured, but softly nurtured man, who can neither ride, swim, nor do any other out-of-door thing, and Lizzie, whose secret worship is strength, falls in love with him for his heroism and his figure Many readers will say her worship of his physique is a little overdone, but the over- doing is only a mistake of words. We question if any educated girl ever consciously fell in love with a man because he was strong, —though we have Mr. Kingsley in Yeast against us,—but man- liness is a great attraction, and manliness and strength are very often confused, particularly by those who have few standards by which to try their idols Ainslie, though tempted by the beauty of the girl, does not love her, though he cannot always resist a • Liebe Lorton. By /dn. Linn Linton. London : Mashy, half physical temptation to pet her. She has to do the love- making herself, and it is in the way she does it that the chief interest of the book consists. It seems to us a natural way, a fierce outpouring of strong feeling, exaggerated in expression, because when the girl plays the man's part an exaggeration of passion is needful to justify her to herself. The rules are to be broken, and there must be a reason for breaking them, as well to her own mind as to his. The inverted relation subsists some time, she courting, he half yielding, though aware that his real love is for another girl, Margaret Elcombe, a young lady of the brown- mouse type, who elicits the good in him as Lizzie does the evil, till a terrible incident removes the worst blot in Ainslie's cha- racter. A miner discovers him embracing Lizzie, insults him, demands money, rushes on him with a knife, and is thrown over the precipice dead. The consciousness of a crime destroys Ainslie's vanity, and compels the underlying and better nature to assert itself, while Lizzie's instant assertion that the " murder " has bound her closer to him revolts his sounder instincts, and kills whatever of surface love he had. He tells Lizzie the truth—that he has offered no love to her, and falls back for solace towards Margaret Elcombe, who loves hint well enough to marry him as he goes to confess his crime. Lizzie, raging like a tigress with love, and jealousy, and self-contempt, accuses him of wilful murder, all the circumstances justify the conclusion, and it seems that Ainslie must pass life as a convict, when Lizzie, who has passed the time between accusation and sentence in solitary expeditions on the Langthwaite lake, is swept by a new gust of feeling, and, under the old, half-mad impulsiveness, declares in open court that she has been guilty of perjury because Ainslie had rejected her advances, and, true to the last to her character, drowns herself, a victim to that dangerous impulsiveness for which English, strange to say, has no forcible word—the impulsiveness which is based not upon capriciousness, but on a melancholy so deep that the mind feels it must break loose from it or be shat-

Whatever of unnaturalness may appear in this brief sketch is our fault, and not Mrs. Linton's, for she makes her really original plot natural with a thousand touches of explanation which we can only omit, and has set her figures before a background which would make them seem natural were they far more bizarre. The story is but a thread connecting a series of sketches of a life little known in Southern England, that of the Cumberland hills, and of people to whom we have scarcely an analogy, the Cumbrian " statesmen "—estatesmen—the peasant proprietors, men who have never called any man master, with small freeholds, old pedi- grees, a pride that passes that of nobles, a Conservatism which makes old Toryism look weak. Jobby Dowthwaite, " t' King ov Wastdale," the proud stolid peasant who can defy the rector and like him all the while, will speak "oot" to any man, but be as hospitable to him as a relative, who rules Wastdale because he is the impersonation of its latent prejudices, and who delivers his mind at vestry—when the rector wants the charities properly managed — after this fashion, is a character to live :—

" As to charities, they too did well enough. If they were not ad- ministered quite to a body's mind, no one but Mr. Wynter had aught to say against them : and if the people who had the benefit did not complain, the parson need not. No good was got by pulling things to bits in this gait ; and no good was got out of all these new-fashioned fancies. Old things were best—a body knew what be had to trust to then; he knew the best and worst, and might act according. He was an auld-ways man himself, and he thanked God for it, and Langthut was an auld-ways place, and as long as he was alive and had a tongue in his head he would do his best to keep it what his forbears had made it. The Wasd'le Doothuts had always been men who had stood shoulder to shoulder with their friends and had never turned their backs on their foes ; and he was past anything else now. He asked Langth- waite whether it wanted to shame the forbears on it by going after strange ways like a flock of sheep drove by a colley ? They might if they'd a mind, but they would'nt get a Dowthwaite among them. And then he spoke of what had been rankling in his mind from the beginning : the administration of the sacrament out of course—once a month, gude Lord!—the. change from an afternoon to an evening service; the new manner of singing—certain psalms being chanted that were always said before; the heathenish' service on the eve of Good Friday, and the sacrament then too, in real imitation of the Last Supper — 'was iver sic like wickedness heerd tell on ?' said Jobby, a little more excitedly than was usual with him ; the Sunday-school, as it was called, 'tormenting t' pair bairns wid me eend o' clashes a fashes; ' in all of which matters he said he thought it would have been more respectful in Mr. Wynter, who was nobbut a young man and a stranger, to have ast leave before he took such liberties on himself. Langthut was not used to a stranger ruling o' this gait, and Mr. Wynter would find may be that he wasn't quite strong enough to play at spin top with every thing as he liked."

The huge granite man who believes in his heart that the fortune of the Dowthwaites is bound up in a " luck," a glass vase of rare workmanship, which he keeps in a cabinet, while half ashamed of so superseding Providence by a superstition, who sells the estate which has been four hundred years in his family rather than a graceless son of his should be prosecuted for fraud, and dies of the misery of his downfall, is grandly drawn. We cro• not know that we ever read a sketch, certainly not among season novels, which suggested so strongly the idea of sculpture, as if the figure had been patiently hewn out in hard stone till at last there it was, the perfect representation of the living man. " Aggy woman," Jobby's wife, is almost equally good, though not so lovingly worked at ; and so is Mark, the good " hedge-priest," the Cumbrian clergyman, born a peasant, half-educated, and able to live in comfort on sixty pounds a year, who toils if needful in the field, and can join in any amusement, and talks a dialect, but still tries hard and not unsuccessfully to make his flock better than they are. Gracie his wife is a failure. One catches a dim idea of a Cumbrian girl, half peasant, half lady, frank of speech and kindly of heart, in whom utter independence serves for ease of manner and a lov- ing heart for sweetness of character, but it is through a mist. Gracie does not do enough to be quite visible, and Margaret Elcombe is for a different reason equally obscure. She seems clearly drawn, but one does not see even to the end why a woman of her kind should have the power of loving as she loves, of marrying a man on his way to the magistrate to confess an act which he feels and she believes was almost murder. Nothing in Margaret, independ- ent as she is, but still not one to whom conventionalities are no- thing, suggests such self-abandonment as this, and it comes upon us with the shock of a surprise. Crime, if repented of, might not have moved her —there are natures which can rise to that height, which have, as it were, caught from Mist a capacity of pardon which has no relation to indifference, but the accidents of crime, the chance that her lover might be for years a convict, herding with convicts, we think would. At least if it would not, Mrs. Linton has failed to suggest the power in Margaret Elcombe which could so throw off all the influence of a strictly conventional training, which could endure not ouly the prison stain on her husband, but the prison dress. Margaret Elcombe seems to us the only defect in a novel otherwise indefinitely superior to the mass of those we are so often condemned to read.