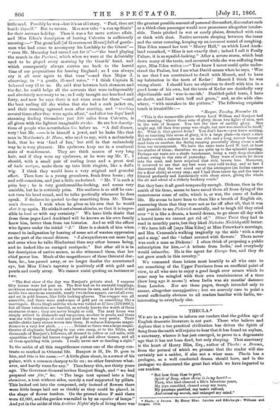 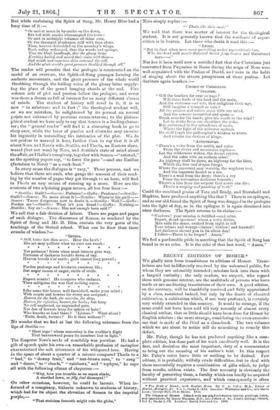 WE are in a position to inform our readers that the golden age of English dramatic literature is not past. Those who believe and deplore that a too practical civilization has driven the Spirit of Song from the earth will rejoice to hear that it has found an asylum, a sanctuary, whence it has just emerged, to prove to a degenerate age that it has not been dead, but only sleeping. That sanctuary is the heart of Henry Bliss, Esq., author of Thecla: a Drama, from the perusal of which we promise that the reader will rise certainly not a sadder, if also not a wiser man. Thecla has a prologue, as a well conducted drama should have, and in the prologue we discovered the great fact which we have imparted to our readers.

" But how from thee to par% Spirit of Song, whose shrine is in my heart — Then, who hest cheered a life's laborious years, My joys ennobled, chased away my tears, My passions purified, my takes refined, And raised My morals, and enlarged my »d•" • Thecia : a Drama. By Henry Mier. Loudon and Edinburgh: Williams and Norgate. 1366.

But while enshrining the Spirit of Song, Mr. Henry Bliss had a busy time of it :—

" Or met at morn in by-paths on the down, Ere toil with smoke o'ercanopied the town :

Or met in midnight volumes all thine own,

Or the thronged playhouse, still with thee alone.

Thee, heaven-descended on the noonday's wings, Each valley welcomed, thee the woods and springs, Thee the bleak headlands, thee the glassy brine

Exulting hailed, and mixed their voice with thine—

Soft winds and conscious skies returned the call And the whole worlds great presence throbbed through all."

The reader will perceive that the prologue is constructed on the model of an overture, the Spirit-of-Song passages forming the andante movements, and the great presence of the whole world throbbing through the hailing voice of the glassy brine supply- ing the place of the grand banging chords at the end. Five solemn acts of plot and passion follow the prologue, and never was there a drama so full of interest for so many different classes of minds. The student of history will revel in it, it is so new " in substance and in fact ;" the theological student will, or we are mistaken, be enlightened by its perusal on several points not exhausted by previous commentators ; to the philoso- phical student we have only to say that Seneca is a leading charac- ter; the "general reader" will find it a charming book to go to sleep over, while the lover of puzzles and charades may exercise his ingenuity in unravelling the intricacies of the plot. We do not profess to unravel it here, further than to say that it is all about Nero, and Nero's wife, Statili t, and Theela, an Eastern slave, wooed (but not won) by Nero, awl Statilia's state of mind about the affair, and Galba's conspiracy, together with Seneca—" entered," as the sporting papers say, " to force the pace "—and one Emilius (factotum to Nero) " as a cock-boat."

In every sense the dialogue is " racy," Those persons, and we believe that there are such, who gauge the amount of their read- ing by the number of pages they get through in an hour, will find in Thecla an easy means of running up a score. Here are the contents of two adjoining pages octavo, all but four lines :- "Statilia: Guilt?—Seneca : Patience!—Gallia: Prudence!—Statilia: Guilt?—Seneca: No more about it!—Statilia: Whate'er his guilt — Seneca : 'Twere d ingerous now to doubt it. —Statilia : Well 2—Gailict : Pardon mo!—Statilia: What is't you dread?—Gallia: Nothing.— Statilia : Say on ! —Seneca Has not enough been said ?"

We call that a fair division of labour. There are pages and pages of such dialogue. The discourses of Seneca, as rendered by the Spirit of Song and Mr. IL Bliss, contain the very germ of the teachings of the Stoical school. What can be finer than these crumbs of wisdom?—

Yet patience ! frosts when most intense give way. Extreme of darkness heralds dawn of day.

Like some fair house, well furnished, make your mind ; With courts and bowers for every use assigned ; Bowers for the bath, for exercise, for sleep, Bowers for refection, bowers for books; but keep No cell neglected, no unguarded gate,

Nor den of horrors keep for spleen or hate ! Who knocks so loud there ? 'Lidera!' What about ? 'Exile, death, torture!' Do it then without!"

"Blest sage ! whose reasoning is the warbler's flight That heavenward pours its numbers lost in light."

The Emperor Nero's mode of courtship was peculiar. He had a gift of speech quite his own—a remarkable profusion of metaphor characterized the soft utterances of his whispered love. having in the space of about a quarter of a minute compared Thecla to a ." bud," to "downy fruit," and "nut-brown corn," to " song " and " dance," to " clouds," " rainbows," and " zephyrs," he caps all with the following climax of eloquence :—

"Why, how you tremble as an aspen shade, A startled fawn, or filly foal dismayed !"

'On other occasions, however, he could be laconic. Whea in- formed of a conspiracy, hitherto unknown to students of history, which had for its object the elevation of Seneca to the imperial purple,—

We said that there was matter of interest for the theological student. It is not generally known that the residence of super- stition is in heaven. Let those who doubt it read this :— e EPODE.

"But in dust when men were grovelling under superstition's ban, Who her head with scowls distorted thrust fi on heaven and threatened man—"

Nor has it been until now a certified fact that the Christians just converted from Paganism in Rome during the reign of Nero were well acquainted with the Psalms of David, and were in the habit of singing about the streets paraphrases of those psalms. Let doubters again hearken :— CHORUS OF CHRISTIANS. " STROPHE.

" Will the heathen for ever so rage ?

Will these lords of the land and the main,

And the statesmen and wits, that enlighten their age,

Still imagine a counsel so vain ?

All the princes and rulers arose with one mind, And the senates assembled and spoke - Break asunder his bands, give his words to the wind !

Let us shake from our shoulders the yoke.

Bat, enthroned in the splendours of morn, Where the Light of the universe springs,

He shall laugh the philosopher's wisdom to scorn,

Aud rebuke the devices of kings.

"There's a voice from the zenith, and voice

From the rivers and mountains replies—

And the vales with an anthem arise!

Au highway shall be there, an highway for the blest,

Which the lion and dragon forego, Where the ransomed may worship, the wayfarer 'rest,

And the impotent bound as a roe.

There's a wail from the deep; there's a cry From the bottomless darkness beneath; There's a hiss from the serpent that never can die ; There's a weeping and gnashing of teeth."

Could the combined genius of Tate and Brady, and Steruhold and Hopkins, have produced anything like that ? There is an epilogue, and as our old friend the Spirit of Song was dragged in the prologue into the light of day, so in the epilogue it is again dismissed into utter darkness. The Spirit returns to its shrine :—

" Shadows ! your mission is fulfilled—and mine.

Depart, dread spectres! whom a voice divine, Man calls the muse, evoked from night to tell Your crimes and wrongs—hence ! thither! and farewell!

Let darkness shroud you in its silent den! I follOw—There to bo forgot? Amen."

We feel a pardonable pride in asserting that the Spirit of Song has found in us an echo. It is the echo of that last word, " Amen,"