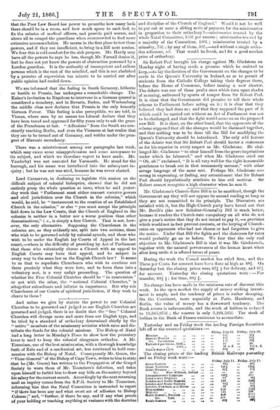 Mr. Gathorne Hardy declines to make a reputation this year.

He informed the House on Tuesday that before proposing any new measure he proposed to use certain dormant powers already in his hands. lie thinks, in opposition to Mr. Faenall,

that the Poor Law Board has power to prescribe how many beds there should be in a room, and how much space to each bed, to fix the salaries of medical officers, and provide paid nurses, and above all to compel the guardians when overcrowded to find more extensive accommodation. He means in the filet place to test these mowers, and if they are insufficient, to bring in a Bill next session. 'We fear this is cold comfort for the sick paupers. Mr. Hardy may have all the perwers he says he has, though Mr. Farnall denies it, but he does not yet know the powers of obstruction possessed by a London guardian. It is the authority of incompetent and callous persons which is the root of the mischief, and this is not abolished by a promise of supervision too minute to be carried out after public opinion had cooled down.