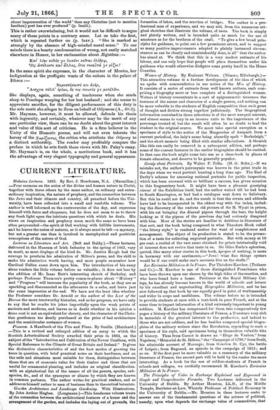 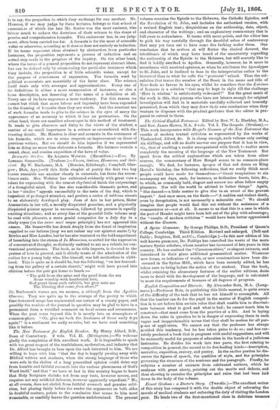 Page 21, 21 July 1866 — The Principles of Value in Exchange Explained and Expressed in
Close

The Principles of Value in Exchange Explained and Expressed in

Simple and Comprehensive Formula. Two Lectures delivered in the University of Dublin. By Arthur Houston, LL.D., of the Middle Temple, Barrister-at-Law, Whately Professor of Political Economy in the University of Dublin.—Mr. Houston in these lectures seeks to answer one of the fundamental questions of the science of political, namely; upon what depends the exchange value of commodities, that

is to say, the proportion in which they exchange for one another. Mr. Houston, if we may judge by these lectures, belongs to that school of coorromiets of which the late Mr, Senior was the most eminent, Who lahout much to reduce the doctrines of their science to the shape of precise and comprehensive formulae. This endeavour has, in our judg- ment, often boon carried too far. A formula is for the most of scientific value or otherwise, according as it does or does not embody an induction.

If its terms represent ideas obtained by abstraction from particular instances, the proposition represents a process of induction and an actual stop made in the progress of the inquiry. On the other hand, where the terms of a general proposition do not represent abstract ideas, but can be defined only by enumerating the particular instances which they include, the proposition is of little scientific value, except for the purpose of conciseness of expression. The formula used by political economists are essentially of the latter class. The science, itself deals only with averages and approximations. Every one of its definitions is either a more enumeration of instances, or else a loose description, not deserving of the name of a definition at all. Every one of its laws expresses a mere tendency. For this reason we cannot but think that more labour and ingenuity have been expended in the framing of formulae than they are worth. And the constant use of such formulae tends to give to the science in the eyes of many the appearance of an accuracy to which it has no pretensions. On the other hand, there are manifest advantages in this method of treatment. It tends to give clearness and fixity to the views of the student, a matter of no small importance in a science so encumbered with dis- tracting details. Mr. Houston is clear and accurate in the statement of his formulas, which are in some respects an improvement on those of previous writers. But we should do him injustice if we represented him as doing no more than elaborate a formula. His lectures contain a sound, clear, and concise exposition of the laws of value.