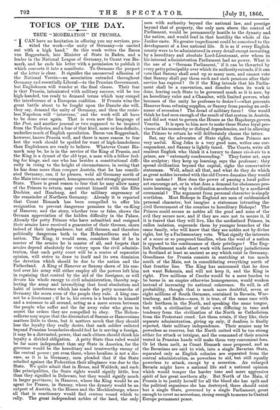 But, say the advocates of State rights, these Princes are very useful. King John is a very good man, writes one cor- respondent, and Saxony is lightly taxed. The Courts, write all resident English who think it a luxury to dance vis-a-vis to a prince, are " extremely condescending." They foster art, says the sculptor • they keep up learning, says the professor; they spread civilization beyond the capital, sighs the conservative statesman. Well, admit all that, and what do they do which as great nobles invested with the old Crown domains they would leave undone ? How does the power of passing a local police act encourage art, or in what does a demand for obeisances pro- mote learning, or why is civilization accelerated by a mediaeval ceremonial ? The argument from personal character is simply worthless. Most Bishops in England are men of unblemished personal character, but imagine a statesman intrusting the civil Government of the counties to hereditary Bishops! The Princes could secure as nobles all the good and none of the evil they secure now, and if they are sure not to secure it, if it is feared that they will live, like the mediatized Princes, in sullen isolation, supersede them by younger branches of the same family, who will know that they are nobles not by divine right, but by a Parliamentary vote. What signify the interests of a score or so pampered families, when the weal of a nation is opposed to the continuance of their privileges ? The Eng- lish Parliament made short work with hereditary jurisdictions in Scotland at least as ancient as any which exist in Germany. Greediness for Prussia consists in snatching at too much south of the Main, not in consolidating everything north of that frontier line. The King has announced that he does not want Bohemia, and will not keep it, and the King is right. Five millions of Czechs would be a mere burden to be borne in an empire otherwise homogeneous, would weaken instead of increasing its national coherence. So will, in all probability, though that is much more doubtful, seven or eight millions of South Germans, contained in Bavaria, Wur- temburg, and Baden—men, it is true, of the same race with their brethren in the North, and speaking the same tongue, but with a civilization of their own differing in tone and tendency from the civilization of the North as Catholicism from the Protestant creed. • Let them retain, if they like, their separate administration, giving up only, if dualism is finally rejected, their military independence. Their armies may be powerless as reserves, but the North united will be too strong either for attack or intrigue, and the command of their armies vested in Prussian hands will make them very convenient foes. Or let them melt, as Count Bismark once proposed, and as the Bavarians are said to wish, into a single Bavarian State, separated only as English colonies are separated from the central administration, as powerless to aid, but still equally powerless to attack, except by a secession. An enlarged Bavaria might have a national life and a national opinion which would temper the harder tone and more aggressive spirit of her great northern ally. But North of the Main, if Prussia is to justify herself for all the blood she has spilt and the political organisms she has destroyed, there should exist but a single State, governed by a single Parliament, great enough to covet no accessions, strong enough to secure to Central Europe permanent peace.