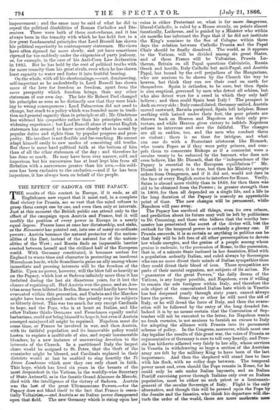 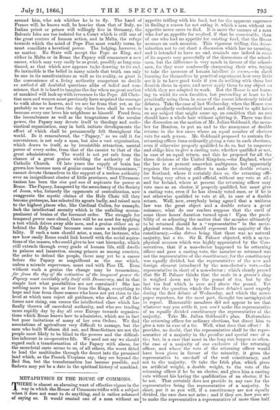 THE EFFECT OF SADOWA ON THE PAPACY.

THE results of this contest in Europe, if it ends, as all Englishmen now expect that it must end, in a complete final victory for Prussia, are so vast that the mind refuses to grasp them except one- by one, and even then only at intervals. Just at this moment the British public can attend only to the effect of the campaign upon Austria and France, but it will modify the position of every power in Europe in a nearly equal degree. Frantz loses at once her dictatorship, and sisks, as the Economist has pointed out, into one of many co-ordinate powers; Austria beComes the natural protector of the nation- alities of the East, instead of the natural foe of the nations all-ties of the West ; and Russia finds an impassable barrier erected between herself and the civilized half of the European world. With Germany constituted, it becomes useless for England to waste time and character in protecting an insolvent Museulman horde, while Scandinavia gains an ally among whose immediate and pressing interests will be the freedom of the Baltic. Upon no power, however, will the blow fall so heavily as on the Papacy, which lost at Sadowa infinitely more than it has forfeited during the last six disastrous years, for it lost the chance of regaining all. Had Austria won the game, and an Aus- trian army been billeted in Berlin, Rome would hardly have been evacuated within this generation, and Umbria and the Marches might have been replaced under the priestly sway its subjects so bitterly detest. This was too much for any except Cardinals to hope, and the Pope, who is at heart an Italian, and like other Italians thinks Germans and Frenchmen equally useful barbarians, could not bring himself to hope it, but even if Austria emerged uninjured all might be regained. Napoleon must die some time, or France be involved in war, and then Austria, with its faithful population and its immovable policy would hasten to expiate a multitude of sins, and repair innumerable blunders, by a new instance of unswerving devotion to the interests of the Church. In a partitioned Italy the largest share would be assigned to St. Peter, that the theft of the remainder might be blessed, and Cardinals replaced in their districts would at last be enabled to sing heartily the Te Deum Laudanum which now they can only chant in faith. This hope, which has lived six years in the breasts of the mat despondent in the Vatican, in the worldly-wise Secretary of State Antonelli, as in the fanatic Grand Almoner de Merode, died with the intelligence of the victory of Sadowa. Austria was the last of the great Ultramontane Powers,—for the Papacy does not blind itself to the fact that France is essen- tially Voltairiaa,—and Austria as an Italian power disappeared upon that field. The new Germany which is rising upon her

ruins is either Protestant or, what is far more dangerous, liberal-Catholic, is ruled by a House sternly, on points almost fanatically, Lutheran, and is guided by a Minister who within six months has informed the Pope that if he did not institute the King's nominee to the See of Cologne within three days the relation between Catholic Prussia and the Papal Chair should be finally dissolved. The world, as it appears to the Vatican, will be divided among six great States, and of these France will be Voltairian, Prussia Lu- theran, Britain on all Papal questions Calvinistic, Russia Greek and hostile, Italy Catholic but anti-Papal, and Austria Papal, but bound by the evil prejudices of the Hungarians, who are anxious to be shown by the Church the way to heaven, but think they can see their road on earth for themselves. Spain is orthodox, to be sure, but then Spain is also sceptical, governed by men who detest all schism, but who also detest wars for a creed in which they only half believe ; and then could Spain beat Italy ? The prospect is dark on every side ; Italy consolidated, Germany united, Austria moved eastward, Bavaria paralyzed, Spain left helpless, Rome seething with hatred under their feet, the poor priests are thrown back on Heaven and Napoleon as their only pro- tectors, and while Heaven gives victory to infidels Napoleon refuses to intervene and save the faithful. The changes• are all so sudden, too, and the men who conduct them so violent ; there is no time for intrigue, and what

can one do with a Protestant aristocrat like Bismark, who treats Popes as if they were petty princes, and com- pels them to consecrate Bishops as if a concordat were a. secular treaty to be enforced by the bayonet, who does not even believe, like Mr. Disraeli, that the " independence of the- Papacy is essential to the European equilibrium ?" Mr. Disraeli is in power, it is true, but then his Ministry accepts, orders from Orangemen, and if it did not, would not dare in, the face of every English rector to interfere for Rome. Verily, Satan is abroad more visibly than in 1848, for then there was aid to be obtained from the Powers ; in greater strength than in 1800, for then all depended on a single life, and a life in. the long duration of the Papacy is scarcely an appreciable point of time. The new changes will be permanent, while- Napolene will pass Milky. The Papacy has survived all things, even its own crimes, and prediction about its future may well be left by politicians. to Dr: Cumming, and those who believe that the worthy bee- master has penetrated the Secret of the divine will, but the outlook for the temporal power is certainly a gloomy one If Prussia succeeds, it is as certain as anything in politics can be- that Italy will be left free of all other preoccupation to devote-

that is, of a minute State inclosed in her dominion, filled with

a population ardently Italian, and ruled always by Sovereigns- who can no more divest their minds of Italian sympathies than they could divest their blood of iron. Those sympathies are parts of their mental organism, not subjects of its action. No- " guarantee of the great Powers," the daily dream of the Vatican, is any longer possible, and Napoleon, even if willing- to remain the sole foreigner within Italy, and therefore the sole object of the concentrated Italian hate which in Venetia has but deepened yearly through sixty years, cannot always- have the power. Some day or other he will need the aid of Italy, or he will dread the force of Italy, and then the evacu- ation will be followed by the entry of the long dreaded foe.