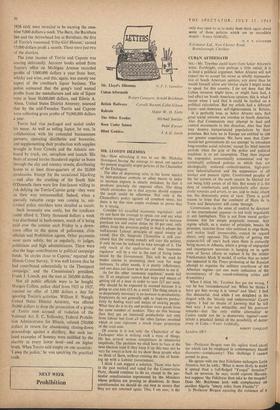 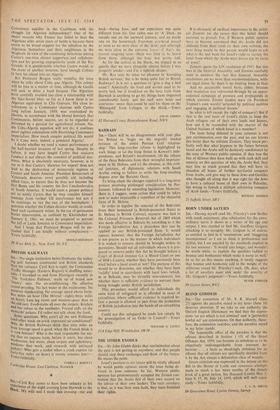 Page 14, 21 July 1961 — SK—Professor Brogan uses the ugliest word about me which can
Close

SK—Professor Brogan uses the ugliest word about me which can

be employed in contemporary liberal discourse—complacency! This challenge I cannot permit to pass.

He agrees with me that Fidelismo endangers Latin America, but he adds: 'What is more likely to make it spread than a full-fledged "Yanqui" invasion?' Such an invasion, he says, could capture Havana, but suppose 'the Fidelistas then take to the maquis? Does Mr. Beichman look with complacency on another Algeria "ninety miles from Florida"?'

Is Professor Brogan equating the existence of a

Communist satellite in the Caribbean with the struggle for Algerian independence? One of the major reasons why France has failed to beat the Algerians after seven years of battle is because there seems to be broad support for the rebellion by the Algerians themselves and their neighbours in the Maghreb. In view of the continuing defections among Castro's one-time closest supporters and collabora- tors and his growing unpopularity south of the Rio Grande. it is questionable whether Castro would, in the event of another invasion, have enough Cubans to turn his island into an Algeria.

But Professor. Brogan really muddles the issue When he talks about Cuba qua Algeria. This colony will be free in a matter of time, although de Gaulle will seek to drive a hard bargain. The Algerians have carefully avoided too close a relationship with the Sino-Soviet bloc; so far as I know there is no Algerian equivalent to Che Guevara. His close in- volvement as a Communist cicerone with Castro long before January, 1959, was overlooked by liberals, in accordance with the liberal breviary that Communists, before success, are to be regarded as informed by a passion for agricultural reform. No, the Cuba-Algeria equation will not do; it confuses Passé rightist colonialism with flourishing Communist imperialism. How much simpler political life would be if Cuba were, indeed, a potential Algeria! I doubt whether we need a repeat performance of the half-hearted invasion of last spring. Despite its failure, it may have taught Castro that toufours t audace is not always the soundest of political doc- trines. What is absolutely necessary, however, is to see to it that Castro's 'doctrine for export' does not lead to the destruction of democratic regimes in Central and South America. President Betancourt of Venezuela deserves every possible aid, including allied force, to ensure that he does not become the first Benes and his country the first Czechoslovakia of South America. It would seem a proper political act to notify Castro that he may consider himself immune from further US interference but not if he continues to vex the rest of the hemisphere. I question whether the Cuban dictator would, or could, heed such cautionary voices. In the era of permanent Soviet intervention, as outlined by Khrushchev on January 6, 1961, we must be prepared to prevent the fall of Latin America to Communist imperialism.

And I hope that Professor Brogan will be per- suaded that I am totally without complacency._ Yours faithfully,