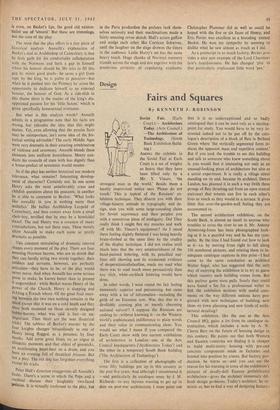 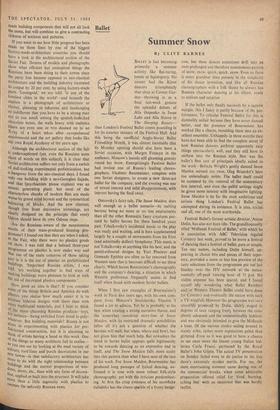 Court.)— Architecture Today. (Arts Council.) —The Architecture of Technology.. (South Bank Exhibition Build- ing.) AMONG the exhibits in the Soviet Fair at Earls Court is a set of weights so heavy that they have been lifted only by a Mr. Y. Vlasov, 'the strongest man in the world.' Beside them a hastily improvised notice says 'Please do not touch.' This is typical of the Russians' ex- hibition technique. They disarm you with their village-bizarre attitude to typography and de- sign, stun you with some large-sounding claim for Soviet supremacy and then perplex you with a monstrous piece of ambiguity. Did They really think I might flex my muscles and walk off with Mr. Vlasov's equipment? As I stood there feeling slightly flattered I was being heavily brain-sloshed at the same time by the crudity of the display technique. I did not realise until niuch later that the very amateurishness of the hand-painted lettering, with its pencilled out- lines still showing and its occasional evidence of desperationinthelastline, made me read what there was to read much more persuasively than any slick, white-on-black lettering would have done.

In other words, I went round the fair feeling immensely superior and patronising, but came away with a lot of information—including the girth of an Estonian sow. Was this due to a devilishly cunning plot or merely charming national naiveté? I suppose the Russians are cashing in—without knowing it—on the Western world's sophisticatea indifference to plain words and their value in communicating ideas. You would see what I mean if you compared the Earls Court show with two current exhibitions of architecture in London—one at the Arts Council headquarters ('Architecture Today') and the other in a temporary South Bank building ('The Architecture of Technology').

The first is a collection of photographs of some fifty buildings put up in this country in the past five years. And although I recommend it —and particularly its catalogue essay by J. M. Richards—to any layman wanting to get uji to date on post-war architecture, 1 must point out that it is so undercaptioned and so badly catalogued that it can be used only as a starting- point for study. You would have to be very in- terested indeed not to be put off by the cata- logue's description of a block of flats in Bethnal Green where 'the vertically segmented form re- duces the apparent mass and repetitive content.' But if you took the trouble to see this building and talk to someone' who knew something about it, you would find it interesting not only as an unusual-looking piece of architecture but also as a social experiment. It is really a village street standing on its end, because its architect, Denys Lasdun, has planned it in such a way (with three prongs of flats thrusting out from an open central staircase) that tenants can live in each other's lives as much as they would in a terrace. It gives them that over-the-garden-wall feeling they are accustomed to.

The second architecture exhibition, on the South Bank, is almost an insult to anyone who troubles to cross the river to see it. Mr. Antony Armstrong-Jones has been photographed look- ing at it in a puzzled way and he has my sym- pathy. By the time I had found out how to look at it—i.e. by moving from right to left along 350 numbered pictures, and relating them to in- adequate catalogue captions in tiny print—I had come to the same conclusion as architect Walter Segal, who has suggested that the only way of enjoying the exhibition is to try to guess which country each building comes from. But this parlour game soon palls. Surely they could have found a fee for a professional writer to link the exhibition sections with useful com- ments on the way different nations have pro- gressed with new techniques of building, new ideas on town planning and new kinds of archi- tectural detailing?

This exhibition, like the one at the Arts Council HQ, gains a lot from its catalogue in- troduction, which includes a note by A. W. Cleeve Barr on the future of housing design in this century. He points out that both Western and Eastern countries are finding it is cheaper to build multi-storey housing with pre-cast concrete components made in factories and hoisted into position by cranes. .But factory pro- duction, he warns us—and you can see the reason for his warning in some of the exhibition's pictures of deadly-dull Eastern prefabricated architecture—gives the architect immensely dif- ficult design problems. Today's architect, he re- minds us, has to find a way of designing factory- made building components that will not all look the same, but will combine to give a contrasting richness of textures and patterns.

If you want to see how little progress has been made on these lines by one of the biggest factory-made-architecture countries you should have a look at the architectural section of the Soviet Fair. Dozens of models and photographs show what efficient but uninspired things the Russians have been dOing to their towns since the party line became opposed to neo-classical architecture and the building industry increased its output by 20 per cent. by using factory-made Parts. 'Leningrad,' we are told, IS one of the loveliest cities in the world'—and beneath the caption is a photograph of architecture so clumsy, planning so inhuman and landscaping so indifferent that you have to be a strong man not to run amok among the sputnik-bedecked Chocolate boxes, the walls heavy with statistics (there are even one or two daubed on to an X-ray of a heart taken after cavopulmosal anastomosis) and the art gallery that looks like our own Royal Academy of ten years ago.

Although the architectural section of the fair is undercaptioned (yes, even the Russians seem Short of words on this subject), it is clear that Soviet architecture suffers not only from a surfeit of dull-looking experimental prefabrication, but a hangover from the neo-classical days. I found Only one building with a neo-Georgian façade, and that (psychiatrists please explain) was an atomic generating plant; but most of the characterless chunks of modern flats are made worse by grand axial layouts and the symmetrical balancing of blocks. And the new cinemas, though free from decorative trimmings, are clearly designed on the principle that every Odeon should have its own Odessa steps.

Are the Russians aware of the monotonous results of their mass-produced housing pro- gramme? I found out that they are when I asked, at the Fair, why there were no plastics goods on show. I was told that a belated three-year Programme on plastics is now under way and that one of the main concerns of those taking Part in it is the use of plastics on prefabricated buildings. 'Important Russian artists,' I was t°41. 'are working together to find ways of making buildings more pleasant to look at with the aid of decorated plastics components.'

How good an idea is that? If you consider s°nie of the things Britain and America do with Plastics you realise how much easier it •is to Produce hideous designs with them than with 11-'°re traditional materials, and I hate to think °J• the more charming Russian products --toys, tor instance—being switched from wood to poly- Whatever. But building materials? Russia is not al_ one in experimenting with plastics for pre- Iabricated construction, but it is alarming to think of artists having a hand in this work. One of the things so many architects fail to realise— as You can see by looking at the mad variety of colours, roof-lines and porch decorations in our new towns—is that satisfactory architecture has 11131ore to do with the right relationship between ,tlildings and the correct proportions of win- °ws, doors, etc., than with any form of decora- tion, applied or boat into the structure. It will take snl°re than a little ingenuity, with plastics to weeten the unlovely Russian rows.