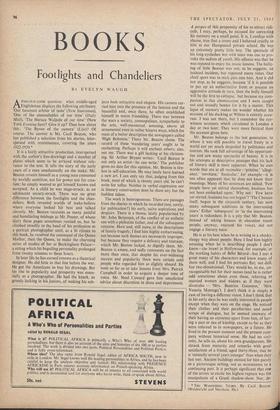 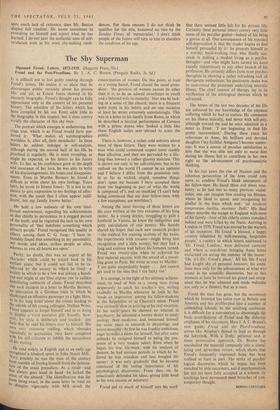 APARLOUR-GAME question : what middle-aged Englishman displays the following attributes: 'Our foremost arbiter of taste' (New Statesman), 'One of the unassailahles of our time' (Daily Mail), 'The Horace Walpole of our time' (New York Evening Sun)? Give it up? Then how about this : 'The Byron of the camera' (Life)? Of course. The answer is Mr. Cecil Beaton, who has published a selection from his diaries, inter- spersed with reminiscence, covering the years 1922-1939.*

It is a fairly attractive production, interspersed with the author's line-drawings and a number of plates which seem to be arrayed without rele- vance to the text. It tells the story of the early years of a man unashamedly on the make. Mr. Beaton reveals himself as a young man consumed by worldly ambition, not for power nor for crea- tion; he simply Wanted to get himself known and accepted. As a child he was stage-struck; as an adolescent society-struck. There was no great difference between the footlights and the chan- deliers. Both revealed worlds of make-believe where everyone looked his best and talked cleverly. Mr. Beaton recounts as many painful and humiliating mishaps as Mr. Pooter, of whose diary these pages sometimes remind us, but he climbed steadily to the head of his profession as a portrait photographer until, as a fit climax to this book, he received the command of the Queen Mother, then the Queen, to make the charming series of studies of her at Buckingham Palace— a sitting which his beguiling personality prolonged from twenty minutes to three hours.

In later life he has earned renown as a theatrical designer. He did little in that line before the war. He got the Americans to buy his drawings. But his rise to popularity and prosperity was essen- tially as a photographer. He had the knack, so grossly lacking in his juniors, of making his sub-

jects look attractive and elegant. His camera car- ried him into the presence of the famous and the beautiful and, once there, he often established himself in warm friendship. There was between the wars a society, cosmopolitan, sympathetic to the arts, well-mannered, amusing, above all ornamental even in rather bizarre ways, which for want of a better description the newspapers called 'High Bohemia.' There Mr. Beaton shone. The record of these 'wandering years' ought to be enchanting. Perhaps it will enchant others; alas, not me. There was a gift lacking at his christen- ing. Sir Arthur Bryant writes: 'Cecil Beaton is not only an artist—he can write.' The publisher, gives no date for this opinion. Mr. Beaton is tire- less in self-education. He may lately have learned a new art. I can only say that, judging from this book, most of which is twenty years old, he can't write for toffee. Neither in verbal expression nor in literary construction does he show any but the feeblest talent.

The work is heterogeneous. There are passages from the diaries in which he recorded (not, surely, for publication?) his early, naïve aspirations and despairs. There is a theme, lately popularised by Mr. John Betjeman, of the conflict of an msthetic son with a philistine father, and of the subsequent remorse. Here and, still more, in the descriptions of family tragedy, I find him highly embarrassing, not because such themes are necessarily improper, but because they require a delicacy and restraint, which Mr. Beaton lacked, to dignify them. Mr. Beaton is aware, and sadly comments on the fact more than once, that despite his ever-widening success and popularity there were certain cold people who regarded him as slightly absurd. He went so far as to take lessons from Mrs. Patrick Campbell in order to acquire a deeper tone of voice. Mr. Noel Coward gave him unsolicited advice about discretion in dress and deportment.

A propos of this propensity of his to attract ridi- cule, I may, perhaps, be excused for correcting his memory on a small point. It is, I confess with shame, true that a crony and I behaved cruelly to him at our Hampstead private school. He was an extremely pretty little boy. The spectacle of his long eyelashes wet with tears was one to pro- voke the sadism of youth. His offence was that he was reputed to enjoy his music lessons. The bully- ing of little Beaton was not, as he suggests, an isolated incident, but repeated many times. Our chief sport was to stick pins into him. And it did not stop, as he suggests, because 'if it is possible to put up an authoritative front or assume an aggressive attitude in turn, then the bully himself will be the first to collapse,' but because my com- panion in this abomination and I were caught out and soundly beaten for it by a master. This lapse of memory makes me wonder whether his account of his ducking at Wilton is entirely accu- rate. I was not there, but I remember the eye- witness accounts which circulated in London a day or two later. They were more farcical than the account given here.

Mr. Beaton belongs to the last generation, to whom it was still possible to travel freely in a world not yet much despoiled by politicians and tourists. He took full advantage of his opportuni- ties and saw many spectacles of beauty. It is in his attempts at descriptive passages that his lack of literary skill is most apparent. When he uses words that are at all recondite—'pristine,' allegi- ance,"novitiate,"funicular,' for example—it is too often apparent that he does not know their meanings. Many of his sentences are stilted. 'Few people have yet stirred themselves; business has not been embarked upon.' Why not : 'Few have yet stirred; business has not begun'? 'The Chateau itself, begun in the sixteenth century, has seen many subsequent additions in the intervening years.' Either 'subsequent' or 'in the intervening years' is redundant. It is a pity that Mr. Beaton, instead of taking lessons in elocution (most people, anyway, enjoyed his voice), did not engage a literary tutor.

He is at his best when he is writing in a cheeky, slangy way about people. Here 1 find him highly amusing when he is describing people I don't know—the brawl in Hollywood, for example, or the working habits of Bb e Berard—but I met a great many of his characters and knew many of them well, and I find his portraits flat; not dull, but two-dimensional. They would be, to me, un- recognisable but for their names (and he is rather odd sometimes about even these, referring to married women and widows as if they were divorcees — 'Mrs. Beatrice Guinness,' 'Mrs. Venetia Montagu'). I don't think it is simply a case of having a different vision. I don't think that in his early days he was really interested in people except when they were on the stage. He noticed their clothes and their peculiarities and noted scraps of dialogue, but he seemed unaware of their having an existence apart from him, of hav- ing a past or ties of kinship, except so far as they were referred to in newspapers, or a future. He lived in the present moment and the present com- pany without historical sense. He had no curi- osity, he tells us, about his own grandparents. He shrank from maturity and remarks with great satisfaction of a friend, aged thirty-three, that he is 'mentally several years younger' than when they last met. Ancient buildings existed for him purely as a picturesque setting, not as monuments to a continuing past. It is perhaps significant that one of the artists to excite his highest rapture was the manipulator of a Greek shadow-show. Nor, de- THE WANDERING YEARS. By Cecil Bea ton. (Weidenfeld and Nicolson, 30s.)

Spite much lack of reticence, does Mr. Beaton display full candour. He seems sometimes to eavesdrop on himself and report what he has learned. I do not hear the authentic note of self- revelation even in his most shy-making confi-

dences. For these reasons I do not think he qualifies for the title, bestowed on him by the Sunday Times, of 'memorialist.' I don't think people of the future will turn to him to elucidate the condition of his age.