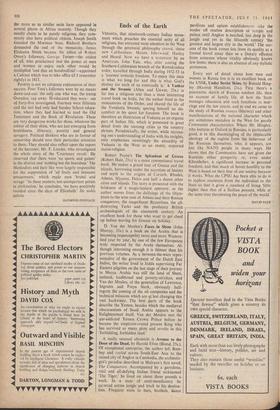 VEDANTA, that nineteenth-century Indian move- ment which preaches the essential unity of all religions, has attracted most attention in the West through the perennial philosophy crowd, those new Californians Messrs. Isherwood, Huxley and Heard. Now we have a teitament by an American, John Yale, who, after wining the Southern.Californian branch of the Ramakrishna order, travelled through India during 1952-53 in a 'journey towards freedom. To enjoy this state is what we long for and this is what •God's destiny for each of us eventually is.' A Yankee and the Swamis (Allen and Unwin, 25s.) is far less a religious text than a most interesting travel book on India, for the author lived in the monasteries of the Order, and shared the life of the Vendanta Swamis, sparing himself no dis- comfort in his quest for freedom. The book is therefore an illustration of Vedanta as an organic part of Indian life, which is presented in great detail from the teeming cities to the country shrines. Paradoxically, the writer, while increas- ing one's understanding of India with his insights, only emphasises unwittingly the absurdity of Vedanta in the West as an exotic, imported status-religion.

Robert Payne's The Splendour of Greece (Robert Hale, 21s.) is a more conventional travel book. He makes a grand tour of Greece and the islands, burrowing under the accretion of history and myth to the origins of Corinth. Rhodes, Athens, Mycerne, Delos and half a dozen ,other cities and islands. The story is presented with the briskness of a magic-lantern operator, as the author moves from the dallyings of the Olym- pians to the wise men of Athens and their Roman conquerors, the magnificent Byzantines, the all- destroying Turks and the -predatory British archaeologists of the nineteenth century. An excellent book for those who want to get clued up before leaving for Greece on holiday.

D. Van der Meulen's Faces in Shem (John. Murray, 21s.) is a book on the Arabia that is becoming imperceptibly more and more Western- ised year by year, by one of the few Europeans truly respected by the Arabs themselves. Al- though interesting enough it is thinner than his previous volumes. As a between-the-wars repre- sentative of the government of the Dutch East Indies, the writer lived in Jedda supervising Far Eastern pilgrims on the last stage of their journey to Mecca. Arabia was still the land of Shem, isolated, traditional and poverty-stricken, and Van der Meulen, of the generation of Lawrence, Ingrams and Freya Stark, obviously half- regrets the coming of the oil companies and the technical missions which are at last changing this vast backwater. The best parts of the book describe the Yemen, besides which the medimval obscurantism of Saudi Arabia appears as the Enlightenment itself. Van der Meulen met the qat-addicted Yemen Crown Prince before he became the suspicion-crazed present King who has survived so many plots and revolts in this 'forbidding, forbidden land.'

A really unusual chronicle is Avenue to the Door of the Dead, by Harold Elvin (Blond, 25s.). Of exceptional enterprise, the author left Bom- bay and cycled across South-East Asia to the ruined city of Angkor in Cambodia, the archaeolo- gist's paradise described in Malraux's first novel, The Conquerors. Accompanied by a garrulous, vital and all-defying Indian friend nicknamed 'The Tiger,' he lived on about three pounds a week. In a state of semi-mendicancy he careered across jungle and track to his destina- tion. Frequent visits to bars, brothels, dance

pavilions and opium establishn,entc take the reader off routine description of temple and palace until Angkor is reached, lost deep in the jungle and yet in the fifteenth century 'the greatest and largest city in the world.' The suc- cess of the book comes less from its quality as a formal travel essay than as a literary effusion from someone whose vitality obviously knows few limits; there is also an absence of any stylistic pretension.

Every sort of detail about how men and women in Russia live is in an excellent book on the USSR, Under Soviet Skins, by Ronald Hing- ley (Hamish Hamilton, 21s.). First there's a panoramic sketch of Russian outdoor life, then an account of family life, of how the State manages education and such functions as mar- riage and the law courts, and to end we come to the study of Russian vranyo (blarney) and other manifestations of the national character which are sometimes mistaken in the West for purely Communist characteristics. Where Mr. Hingley, who lectures at Oxford in Russian, is particularly good, is in this disentangling of the implacable ideology of the regime from the behaviour of the Russians themselves, who, it appears, are just like NATO people in many ways. He shows that the Communists have not given the Russians either prosperity or, even under Khrushchev, a significant increase in personal freedom, and that much of Soviet hostility to the West is based on their fear of our society because it works. What the CPSU has been able to do is to syphon resources from the individual to the State so that it gives a standard of living 'little higher than that of a Sicilian peasant, while at the same time threatening the peace of the world.'