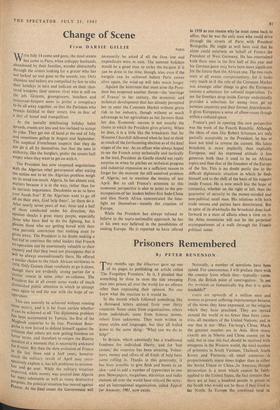 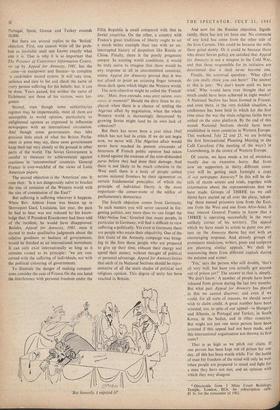 By PETER BENENSON Two months ago the Observer gave up one of its pages to publishing an article called 'The Forgotten Frontiers.' In it, I pleaded that something be done to stem the tide sweeping men into prison all over the world for no offence other than expressing their opinion. No one knew what the reaction to it would be.

In the month which followed something like a thousand letters arrived from over thirty countries. Some came from organisations, others from individuals, some from famous names, others from unknowns. They were written in many styles and languages, but they all boiled down to the same thing: 'What can we do to help?'

In Britain, which admittedly has a traditional fondness for individual liberty, and for 'lost causes,' the response has been amazing. Volun- teers, money and oilers of all kinds of help have come rolling in. Thanks to this generosity, it has been possible to give flesh and bones to an idea—and to add a number of typewriters to one pen. Newspapers, magazines, television and radio stations all over the world have relayed the story; and an international organisation, called Appeal for Amnesty, 1961, now exists. Naturally, a number of questions have been raised. For convenience, I will preface them with the country from which they—typically--come. First, the British point of interrogation : 'Is not the oroblem so fantastically big that it is quite insoluble?'

I here are upwards of a million men and women at present suffering imprisonment because of the views they have expressed, or the religion which they have practised. They are spread around the world in no fewer than forty coun- tries, all members of the United Nations; and in one that is not—Mao Tse-tung's China. Much the greatest number are in Asia. How many exactly are in Siberia and China cannot yet be said; but in case this fact should be received with smugness in the Western world, the total number of prisoners in South Vietnam, Thailand, South Korea and Formosa—all small countries--is proportionately many times higher than in either the Soviet Union Or China–In America, though persecution is a term which cannot be fairly applied to the United States, the fact remains that there are at least a hundred people in prison in the South who would not be there if they lived in the North. In Europe the combined total in Portugal, Spain, Greece and Turkey exceeds 10,000.

But there are several replies to the `British' objection. First, one cannot write off the prob- lem as insoluble until one knows exactly what size it is. That is why it is so important that The Prisoner' of Conscience Information Centre, set up by Appeal for Amnesty, 1961, has the .eans—in manpower and finance—to complete ts card-index record system. It will take time, patience and care to list and check the name of every person suffering for his beliefs; but, it can be done. Years passed, but neither the name of Eichmann, nor those of his victims, were for- gotten.

Second, even though some authoritarian regimes may be impermeable, most of them are susceptible to world opinion, particularly to enlightened opinion as expressed in influential newspapers with an international circulation. And though some governments may take precious little stock of what the British Parlia- ment or press may say, these same governments keep their'ear very closely to the ground in other parts of the world. The Soviet Government is careful to Measure its achievements against reactions in 'uncommitted' countries. General Franco is ever-watchful of the views of Latin American papers.

But suffering is suffering wherever it happens. When Rev. Ashton Jones was beaten up in Shreveport Gaol, Louisiana, last year, the pain he had to 'bear was not reduced by his know- ledge that; if President Eisenhower had been told of the incident, he would have disapproved. Besides, Appeal for Amnesty, 1961, once it started to make qualitative judgments about the relative goodness or badness of governments, Would be finished as an international movement. It can only ex;st internationally so long as it remains rooted to its principle: 'we are con- cerned with the suffering of individuals, not with the political colouring of governments.'

To illustrate' the danger of making compari- sons.consider the case of France. On the one hand the interference with personal freedom under the Fifth Republic is small compared with that in Soviet countries. On the other, a country with France's great traditions of liberty ought to set a much better, example than one with an un- interrupted history of despotism like Russia or China. Finally, there is the purely pragmatic answer. In existing world conditions, it would be truly naive to imagine that there would be any response at all in uncommitted countries, unless Appeal for Amnesty proved that it was not afraid to point an accusing finger towards those dark spots which blight the Western world.

The next objection might be called the 'French' one: Vais, bien entendu, vous avez raison, mais est-ce le moment?' Should the dirty linen be dis- played when there is a chance of settling the Algerian affair by negotiation, when the whole Western world is increasingly threatened by growing Soviet might (and by its own lack of cohesion)?

But there has never been a year since 1945 which has not had its crisis. If we do not begin now, we never will. The Algerian affair would never have reached its present crescendo of bitterness if French public opinion -had taken a stand against the excesses of the now-disbanded paras before they had done their damage. And there is not likely to be much cohesion in the West until there is a' body of people united across national frontiers by their agreement' on certain fundamental ppinciples; of which the principle of individual liberty is the most important—the corner-stone of the edifice of parliamentary democracy.

The fourth objection comes from Germany. 'In such matters you will never succeed in for- getting politics, any more than we can forget the Oder-Neisse Granted that many people, in particular in Germany, will find it difficult to view suffering a-politically. Yet even in Germany there are people who retain their objectivity. One of the first fruits of the Amnesty campaign was bring- ing to the fore those people who are prepared to give up their time, exhaust their energy and spend their money, without thought of political or personal advantage. Appeal for Amnesty insists that each of its National Sections should be repre- sentative of all the main shades of political and religious opinion. This degree of unity has been reached in Britain.

'But honestly. 1 enjoyed it!' And now for the Russian objection. Signifi- cantly, there has not yet been one. No comment of any kind has come from the other side of the Iron Curtain. This could be because the mills there grind slowly. Or it could be because those who direct Soviet policy are satisfied that Appeal for Amnesty is not a weapon in the Cold War, and that those responsible for its initiative are determined that it shall never become one.

Finally, the universal question: 'What eject do you really think you can have?' The answer to this is just : 'We don't know until we have tried.' Who would have ever thought that so much could have been achieved in eight weeks? A National Section has been formed in France; and even there, in the very ticklish situation,' a conference has been held in which fo,r, the first time since the war the main religious faiths have united on the same platform. By the end of this month National Sections should have been established in most countries in Western Europe. This weekend, July 22 and 23, we are holding the first International Planning Meeting in the Café Carrefour ('the meeting, of the ways') in Luxembourg, in the centre of Western Europe.

Of course, we have made a lot of mistakes, mostly due to excessive hurry. But from now on supporters in thirty different coun- tries will be getting each fortnight a copy of our newspaper Amnesty.* In this will be de- tails of recent arrests and trials, together with information about the representations that we have made. Groups of THREE (as we call them) have started up all over the place, 'adopt- ing' three named prisoners (one from the East, one from the West and one from Afro-Asia). It may interest General Franco to know that a THREE is operating successfully in the most unlikely corner of his territory. The appeal which we have made to artists to paint one pic- ture on the Amnesty theme has met with an encouraging response. And already groups of prominent musicians, writers, poets and sculptors Are planning similar appeals. We shall be announcing them from different capitals dining the autumn and winter.

'Yes,' says the person who still doubts, 'that's all very well, but have you actually got anyone out of prison yet?' The answer to that is, simply, 'We don't know.' A number of people have been released from prison during the last two months. But what part Appeal for Amnesty has played• in this we cannot discover; and even if we could, for all sorts of reasons, we should never wish to claim credit. A great number have been arrested, too, in spite of our appeal—in Hungary and Albania, in Portugal and Turkey, in South Korea, in the Sudan, and in other countries. But might not just one more person have been arrested if this appeal had not been made, and this international organisation not thrown its first roots?

That is as high as we pitch our claim. If one person has been kept out of prison for one day, all this has been worth while. For the battle of man for freedom of the mind will only be won when people are prepared to stand and fight for a man they have not met, and an opinion with which they may disagree.

*Obtainable from 1 Mitre Court Buildings, Temple, London, EC4, by subscription only. El Is. for the remainder of 1961.