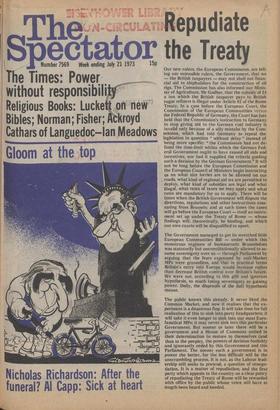 Our new rulers, the European Commission, are telling our ostensible rulers, the Government, that we — the British taxpayers — may not shell out financial aid to shipbuilders for the construction of oil rigs. The Commission has also informed our Minister of Agriculture, Mr Godber, that the subsidy of £4 a ton which the British taxpayer pays to British sugar refiners is illegal under Article 92 of the Rome Treaty. In a case before the European Court, the Commission of the European Communities versus the Federal Republic of Germany, the Court has just held that the Commission's instruction to Germany to stop giving aid to the German coal industry is invalid only because of a silly mistake by the Commission, which had told Germany to repeal the legislation in question " without delay instead of being more specific: "the Commission had not defined the time-limit within which the German Federal Government ought to have ceased all aids and incentives, nor had it supplied the criteria guiding such a decision by the German Government." It will not be long before the European Commission and the European Council of Ministers begin instructing us on what size lorries are to be allowed on our roads, what kind of regional aid we are permitted to deploy, what kind of subsidies are legal and what illegal, what rates of taxes we may apply and what rates are mandatory for us to apply. There will be times when the British Government will dispute the directions, regulations and other instructions emanating from Brussels; and at such times the cases will go before the European Court — itself an instrument set up under the Treaty of Rome — whose findings will, theoretically, be binding, and which our own courts will be disqualified to upset.

The Government managed to get its wretched little European Communities Bill — under which this monstrous regimen of bureaucratic Brusselsdom was statutorily but unconstitutionally allowed to assume sovereignty over us — through Parliament by arguing that the fears expressed by anti-Market MPs were groundless, and that in practical terms Britain's entry into Europe would increase rather than decrease British control over Britain's future. We were not, according to this glib and ignorant hypothesis, so much losing sovereignty as gaining power. Daily, the disproofs of the daft hypothesis mount.

The public knows this already. It never liked the Common Market, and now it realises that the experiment is a disastrous flop. lt will take time for full realisation of this to sink into party headquarters; it will take it even longer to sink into our most Eurofanatical MPs; it may never sink into this particular Government. But sooner or later there will be a government and a House of Commons united in their determination to restore to themselves (and thus to the people), the powers of decision foolishly and ignorantly ceded by this Government and this Parliament. The sooner such a government is in power the better, for the less difficult will be the unscrambling process. it is not, as the Labour leadership still seeks to pretend, a question of renegotiation. It is a matter of repudiation; and the first party which appeals to the country on a clear policy of repudiating the Treaty of Rome will be rewarded with office by the public whose voice will have at length been heard and heeded.