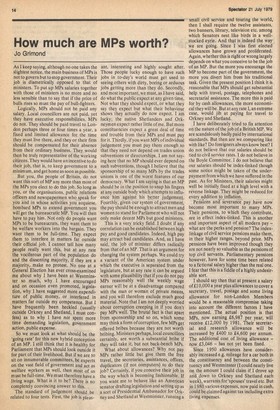 How much are MPs worth?

As I keep saying, although no one takes the slightest notice, the main business of MPs is not to govern but to stop government. Their job is diametrically opposed to that of ministers. To put up MPs salaries together with those of ministers is no more and no less sensible than to say that if the price of bulls rises so must the pay of bull-fighters, Logically, MPs should not be paid any salary. Local councillors are not paid, yet they have executive responsibilities. MPs do not. They should be paid travel to London perhaps three or four times a year, a fixed and limited allowance for the time they must live there, and they or their firm should be compensated for their absence from their ordinary business. They would then be truly representative of the working citizens. They would have an incentive to do their job, that is, to keep government to a minimum, and get home as soon as possible.

But you, the people of Britain, do not want this sort of MP any more than most of the MPs you elect to do this job. So long as you, or the organisations, public relations officers and newspapermen who speak for you and in whose activities you acquiese, bombard MPs to extend government you will get the bureaucratic MP. You will then have to pay him. Not only do people want MPs to be bureaucrats, they want them to be welfare workers into the bargain. They want them to be full-time. They expect them to interfere in matters far outside their official job. I cannot tell how many people really want this, but at any rate the vociferous part of the population do and the dissenting majority, if they are a majority, make no protest. No one at a General Election has ever cross-examined me about why I have been at Westminster so much, why I have encouraged and on occasion even promoted, legislation, why I have suggested more expenditure of public money, or interfered in matters far outside my competence, But I have frequently been heckled (usually outside Orkney and Shetland, I must confess) as to why I have not spent more time demanding legislation, government action, public expense.

So we must look at what should be the 'going rate' for this new hybrid conception of an MP. I still think that it is healthy for Parliament that MPs should look outside it for part of their livelihood. But if we are to sit on innumerable committees, be experts on the vast field of government and act as welfare workers as well, then most of us must be full-time. We must therefore have a living wage. What is it to be? There is no completely convincing answer to this.

The standard of judgement should be related to four tests. First, the job is pleas ant, interesting and highly sought after, Those people lucky enough to have such jobs in to-day's world must get used to seeing others with dirty, boring or arduous jobs getting more than they do. Secondly, and most important, we must, as 1 have said, do what the public expect at any given time. Not what they should expect, or what they say they expect but what their behaviour shows they actually do now expect. I am lucky; the native Shetlanders and Orkneymen expect rather little of me. But more constituencies expect a great deal of time and trouble from their MPs and must pay for it. Thirdly, if you want MPS of individual judgement you must pay them enough so that they need not depend on trades union subventions or directorships. I am not saying here that no MP should ever depend on such subventions, though I believe that the sponsorship of so many MPs by the trades unions is one of the worst features of our democracy. What I am saying is that an MP should be in the position to snap his fingers at any outside body which attempts to influence him against his better judgement. Fourthly, given our system of government, the pay should be enough to attract men and women to stand for Parliament who will not only make decent MPs but good ministers, This is a very tricky field. I doubt if any correlation can be established between high pay and good candidates. Indeed, high pay may attract bad candidates. And, as I have said, the job of minister differs radically from that of an MP. That is an argument for changing the system perhaps. We could try a variant of the American system under which the executive is separated from the legislature, but at any rate it can be argued with some plausibility that if you do not pay MPs reasonably well the weekly wage earner will be at a disadvantage compared with the man or woman of private means, and you will therefore exclude much good material. Note that I am not deeply worried about corruption creeping in if you don't pay MPs well. The brutal fact is that apart from sponsorship and so on, which some may think a form of corruption, few MPs get offered bribes because they are not worth bribing. Ministers perhaps, local councillors certainly, are worth a substantial bribe if they will take it, but not back-bench Mps. What about allowances? Why not pay MPs rather little but give them the free travel, the secretaries, assistances, offices, duplicators (if not computers) to do their job? Certainly, if you conceive their job in the way which is becoming fashionable. If you want me to behave like an American senator drafting legislation and setting tip as a sort of Presidential Ambassador for Orkney and Shetland at Westminster, running a small civil service and touring the world, then I shall require the twelve assistants, two banners, library, television etc. among which Senators nest like birds in a wellstocked eyrie. And that is indeed the way we are going. Since I was first elected allowances have grown and proliferated. Again, whether this is right or wrong largely depends on what you conceive to be the job of an MP. But the more you encourage the MP to become part of the government, the more you divert him from his traditional task. Given the present position I think it is reasonable that'MPs should get substantial help with travel, postage, telephones and secretarial assistance. The more this is paid for by cash allowances, the more economical they will be. But at any rate I, an extreme case, would jib at paying for travel to Orkney and Shetland.

I have deliberately tried to fix attention on the nature of the job of a British MP. We are scandalously badly paid by international standards. But then are we comparing like with like? Do foreigners always know best? I do not believe that our salaries should be tied to civil service rates. I do not believe in the Boyle Committee, I do not believe that our salaries should be index-linked though some notice might be taken of the underpayment from which we have suffered in the past. As for Ministers, their salaries might well be initially fixed at a high level with a reverse linkage. They might be reduced for every addition to inflation. Pensions and ieveranee. pay have now become most important to many MPs. Their pensions, to which they contribute, are in effect index-linked. This is another and important aspect of all modern pay — what are the perks and pension? The indexlinkage of civil service pensions make them, in their higher ranges, beyond price. MPs pensions have been improved though they are not nearly so valuable as the pensions of top civil servants. Parliamentary pensions however, have for some time been related to a fictional salary higher than the real one. I fear that this is a fiddle of a highly undesirable sort.

I should say then that at present a salary of £10,000 a year plus allowances to cover a secretary, travel, postage and some living allowance' for non-London Members would be a reasonable compromise taking into account the different factors I have mentioned. The actual position is that MPs, now earning £6,987 per year, will receive £12,000 by 1981. Their secretarial and research allowance will be increased by £400 to £4,600 per annum. The additional cost of living allowance — now £3,046 — has not yet been fixed.

Since 1950 allowances have considerably increased e.g. mileage for a car both in the constituency and between the constituency and Westminster (I could nearly live on the amount I could claim if I drove up and down to Orkney and Shetland each week), warrants for 'spouses' travel etc. But in 1980 various expenses, now paid in cash, could be claimed against tax including extra living expenses.