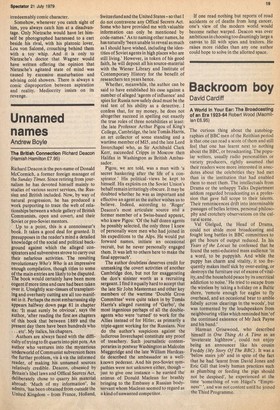 The British Connection Richard Deacon (Hamish Hamilton £7.95) Richard Deacon is the pen-name of Donald McCormich, a former foreign manager of the Sunday Times. Since retiring from journalism he has devoted himself mainly to studies of various secret services, the Russian and British included. Now, by way of natural progression, he has produced a work purporting to trace the web of relationships between a whole gallery of British Communists, open and covert, and their Soviet or pro-Soviet mentors.

Up to a point, this is a connoisseur's book. It takes a good deal for granted. It presupposes in the reader's mind a detailed knowledge of the social and political background against which the alleged conspirators and subversives strove to carry out their nefarious activities. The resulting revolutionary Who's Who is an impressive enough compilation, though titles to some of the main entries are likely to be disputed. The book would certainly have been more cogent if more time and care had been taken over it, Unsightly scar-tissues of transplanting and overhasty cutting are all too manifest in it. Perhaps the most embarrassing slip appears halfway down page 81 in chapter six: 'It must surely be obvious', says the author, 'after reading the first ten chapters of this book that between 1889 and the present day there have been hundreds who • .. etc'. My italics, his chapters.

Authors are always faced with the difficulty of trying to fit quarts into pint pots. An author who ventures into the mysterious underworld of Communist subversion faces the further problem, vis a vis the informed reader, of making his unnamed sources relatively credible. Deacon, obsessed by Britain's libel laws and Offical Secrets Act, deliberately chose to quarry his material abroad: 'Much of my information', he admits, 'has been obtained from outside the United Kingdom — from France, Holland, Switzerland and the United States—so that I do not contravene any Offical Secrets Act. Some who have provided me with valuable information can only be mentioned by code-names,' As to naming other names, he has naturally 'been unable to reveal as much as I should have wished, including the identities of Soviet agents in high places who are still living.' However, in token of his good faith, he will deposit all his source-material with the Wiener Library and Institute of Contemporary History for the benefit of researchers ten years hence.

Whether, meanwhile, the author can be said to have established his case against a number of alleged 'agents of influence' and spies for Russia now safely dead must be the real test of his ability as a detective. I confess that, for my money, he does not altogether succeed in spelling out exactly the true roles of three notabilities at least: the late Professor Arthur Pigou of King's College, Cambridge, the late Tomas Harris, an art collector of some standing and a wartime member of MI5, and the late Lord Inverchapel who, as Sir Archibald Clark Kerr, succeeded Cripps in Moscow then Halifax in Washington as British Ambassador.

Pigou, we are told, was a man with 'a secret hankering after the life of a conspirator.' His political views he kept to himself. His exploits on the Soviet Union's behalf remain irritatingly obscure. It may be doubted whether he was as important and effective an agent as the author wishes us to believe, Indeed, according to 'Roger' Deacon's most articulate source and a former member of a Swiss-based apparat, who knew Pigou: 'Of the half dozen agents he possibly selected, the only three I knew of personally were men who had joined in his expeditions to the Alps. He would put forward names, initiate an occasional recruit, but he never personally engaged them. It was left to others here to make the final approach'.

The author doubtless deserves credit for unmasking the covert activities of another Cambridge don, but not for exaggerating the don's sinister worth as a recruiting sergeant. I find it equally hard to accept that the late Sir John Masterman and other key members of the wartime 'Double Cross Committee' were quite taken in by Tomas Harris's alleged running of 'Garbo', the most ingenious perhaps of all the doubleagents who were 'turned' to work for the Allies instead of for Hitler, as primarily a triple-agent working for the Russians. Nor do the author's suspicions against the ludicrous Inverchapel constitute any proof of treachery. Such journalistic contemporaries in postwar Washington as Malcolm Muggeridge and the late William Hardcaktle described the ambassador as a wellknown pederast. And his pro-Soviet sym-. pathies were not unknown either, though — just to give one instance — he earned the animus of Donald Maclean for brashly bringing to the Embassy a Russian bodyservant whom Maclean seemed to regard as a kind of unwanted competitor. If one read nothing but reports of road accidents or of deaths from lung cancer, one's view of the modern world would become rather warped. Deacon was over ambitious in choosing too dauntingly large a canvas to fill with spies and traitors. He raises more riddles than any one author could hope to solve in the allotted space.