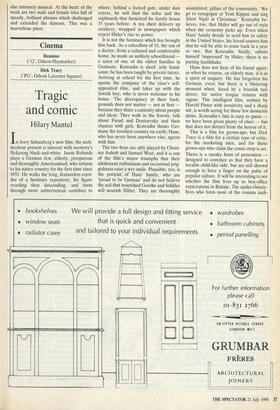 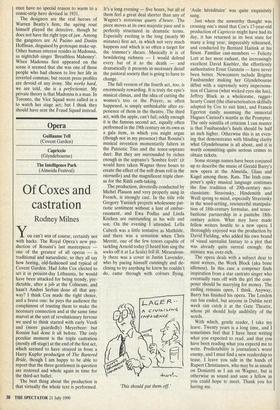 In Jerry Schatzberg's new film, the tech- nicolour present is intercut with memory's flickering black-and-white. Jason Robards plays a German Jew, elderly, prosperous and thoroughly Americanised, who returns to his native country for the first time since 1933. He walks the long, featureless corri- dor of a furniture repository, his figure receding then descending, and turns through more subterranean corridors to

where, behind a locked gate, under dust covers, he will find the sofas and the cupboards that furnished his family house 55 years before. A tea chest delivers up crockery, wrapped in newspapers which report Hitler's rise to power.

It is not the furniture which has brought him back. As a schoolboy of 16, the son of a doctor, from a cultured and comfortable home, he made an unlikely schoolfriend a scion of one of the oldest families in Germany. Konradin is aloof, icily hand- some; he has been taught by private tutors. Arriving at school for the first time, he spurns the company of the class's self- appointed elite, and takes up with the Jewish boy, who is never welcome in his house. The discrepancy in their back- grounds does not matter — not at first because they share a curiosity about people and ideas. They walk in the forests, talk about Freud and Dostoevsky and their chances with girls. Konradin thinks Ger- many the loveliest country on earth; Hans, who has never been anywhere else, agrees with him.

The two boys are ably4)layed by Christ- ien Anholt ang Samuel West, and it is one of the film's minor triumphs that their adolescent enthuiasm and occasional prig- gishness raise a wry smile. Plausible, too, is the portrait; of Hans' family, who are `proud to be German' and do not believe the soil that nourished Goethe and Schiller will nourish 'Hitler. They are thoroughly

assimilated, pillars of the community. 'We go to synagogue at Yom Kippur and sing Silent Night at Christmas.' Konradin be- lieves, too, that Hitler will go out of style when the economy picks up. Even when Hans' family decide to send him to safety in the United States, his friend assures him that he will be able to come back in a year or two. But Konradin, finally, admits himself 'impressed' by Hitler; there is no parting handshake.

Hans does not hear of his friend again; so when he returns, an elderly man, it is in a spirit of enquiry. He has forgotten his German, even; but there is a blistering moment when, faced by a boorish taxi driver, his native tongue returns with vigour. This intelligent film, written by Harold Pinter with sensitivity and a sharp wit, is worth seeing for those few moments alone. Konradin's fate is easy to guess we have been given plenty of clues — but that does not detract from the horror of it.

This is a film for grown-ups; but Dick Tracy is a film for a certain type of critic, for the marketing men, and for those grown-ups who claim the comic-strip is art. Theirs is a sneaky form of pretention designed to convince us that they have a lovable child-like side, but are still shrewd enough to have a finger on the pulse of ,popular culture. It will be interesting to see whether the film lives up to box-office expectations in Britain. The under-twenty- fives who form most of the cinema audi-

ence have no special reason to warm to a comic-strip hero devised in 1931.

The designers are the real heroes of Warren Beatty's firm; the ageing roué himself played the detective, though he does not have the right type of jaw. Among the gangsters are Al Pacino and Dustin Hoffman, disguised by grotesque make-up. Other human interest resides in Madonna, as nightclub singer 'Breathless Mahoney'. When Madonna first appeared on the scene it seemed that she was one of those people who had chosen to live her life in inverted commas; but recent press profiles are devoid of any irony. She works hard, we are told, she is a perfectionist. My private theory is that Madonna is a man. In Toronto, the Vice Squad were called in a to watch her stage act; but I think they should have sent the Fraud Squad instead.