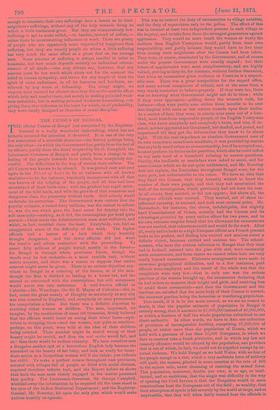 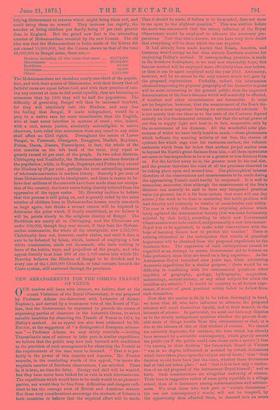 THE CENSUS OF BENGAL.

This result, if it is in the main correct, as we see no reason to doubt, is that the popular estimate of population in Bengal is entirely wrong, that it amounts to 67,000,000 instead of 40,000,000, or within a fraction of half the whole population submitted to our direct authority. In other words, we have in Asia one collection of provinces of incomparable fertility, comprising 67,000,000 of people, or rather more than the population of Russia, which we bold with a garrison of less than 10,000 Europeans, in which we dare to-morrow take a frank plebiscite, and in which any law not insanely offensive would be obeyed by the population, one province that is out of which, in fact, we could not be expelled except by ex- ternal violence. We hold Bengal as we hold Wales, with no fear of the people except in a riot, which a very moderate force of soldiery will quell, the masses, planted in some counties at the rate of 600 to the square mile, never dreaming of resisting the armed force. This population, moreover, double our own, is so apt, so intel- lectual, and so ambitious, that the single real difficulty in the way of opening the Civil Service is that the Bengalees would in mere examinations beat the Europeans out of the field ; so wealthy, that their absorption of specie is felt severely by the world at large, and so impressible, that they will when fairly treated beat the officials in helping Government to returns which might bring them evil, and could bring them no reward. They increase too rapidly, the number of living children per family being 17 per cent. greater than in England. But the grand new fact is the astounding number of Mohammedans revealed by the new Census. The old idea was that the Mohammedans in India north of the Kistna did not exceed 15,000,000, but the Census shows us that of the total 66,000,000 in Bengal alone, there are,— 'Undoes, including all who claim that name 42,674,000 Mussulmans 20,664,000 Buddhists 85,000 Christians 93,000 Others 2,351,000 The Mohammmedans are therefore nearly one-third of the popula- tion, and with their armies of Missionaries, with their theory that all faithful races are equal before God, and with their practice of rais- ing any convert at once to full social equality, they are becoming so numerous that by 1900 they will be half the population. The difficulty of governing Bengal will then be increased fourfold, for they will absolutely rule the Hindoos, and may lose the feeling that Bengal, if made independent, would be a prey to a native race far more unendurable than the English, who at least never interfere in matters of creed ; who, indeed, with a cool, serene justice, absolutely unintelligible to native observers, have ruled that conversion from any creed to any other shall affect no Civil rights. Throughout the centre of Lower Bengal, in Poorneah, Dinajpoor, Rungpore, Maid* Rajshaye, Pubna, Dacca, Jessore, Furreedpore, in fact, the whole of the rich counties on the left bank of the river, they equal or greatly exceed 45 per cent. of the people. In two other districts, Chittagong and Noakholly, the Mohammedans are three-fourths of the population ; while, in Bograh, Ragshaye, and Pubna they exceed the Hindoos by 20 per cent., perhaps the most astounding instance of wholesale conversion in modern history. Scarcely 5 per cent. of these Mohammedans can be immigrants, and there is reason to be- lieve that millions of the converts have been made since our occupa- tion of the country, the lower castes being thereby relieved from the oppression of the upper castes. Mr. Beverley inclines to believe that this process is still going on, and is greatly aided by the extra number of children born in Mohammedan houses, nearly one-sixth as large again, but thinks a second census will be required to determine the point which, if finally established, as we believe it will be, points clearly to the religious destiny of Bengal. The Buddhists are nearly all in Chittagong, and the Christians are under 100,000, though they may secure, if they beat the Moham- medan missionaries, the whole of the aboriginals, now 2,351,000. Christianity does not, however, confer status, and until it does is sure to be defeated by Islam, which, instead of employing a few white missionaries, sends out thousands, who have nothing to learn of the habits, ways, and prejudices of the people, and who appeal directly to at least 900 of the 1,000 castes into which Mr. Beverley believes the Hindoos of Bengal to be divided, and to every one of the 1,500,000 Chundals, or total outcasts beneath the Caste system, still scattered through the provinces.