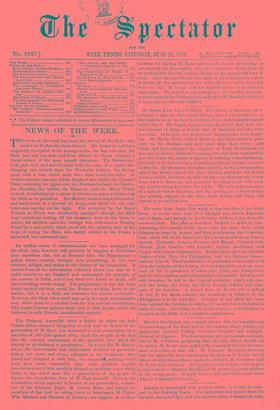 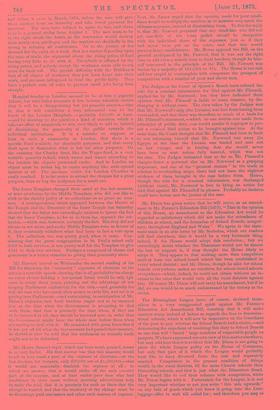 London is threatened with another strike, or it may be

lock- out, in the Building Trade. The carpenters and joiners want 9d. an hour, instead of Bid., and the masters refuse it absolutely now,

and refuse it even in March, 1874, unless the men will give them another hour on Saturday and take lower payment for overtime. The men have refused to agree to this, and there is to be a general strike from August 1. The men seem to be in the right about the hours, as the concession would destroy their newly-won privileges, and the masters are decidedly in the wrong in refusing all conferences. As to the justice of the demand for the extra 2s. a week, that is a matter depending upon the state of trade, the argument about the rising prices of food having very little to do with it. Everybody is affected by the rising prices, and nobody except the workmen seem able to ask more for their toil. The special difficulty with the Builders is that of all classes of workmen they put least heart into their work, and are most indisposed to treat the public fairly. They have a perfect code of rules to prevent small jobs being done cheaply.