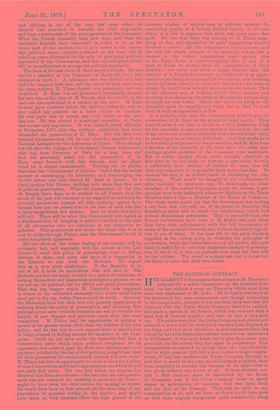 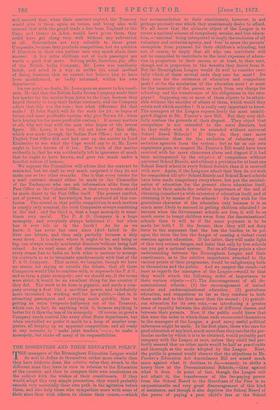 HER MAJESTY'S Government have accepted Mr. Bouverie's proposal for a select Committee on the Zanzibar Con- tract, but not without a scene on Thursday which must have been very unpleasant to Mr. Lowe. He is clearly convinced of the fairness of his own arrangement, and, though submitting to the compromise, thought it was needless, proposed that the Contract with the Union Steam Company should be ratified, and made a speech in its defence, which was received with a good deal of ironical laughter, and was, in fact, a very poor one. His points were that the Union Company had offered and adhered to a low rate for their quick voyages from England to the Cape, and that as in obedience to remonstrances from the Colony he had withdrawn that contract before it was sanctioned by Parliament, it was most harsh not to give them some com- pensation for the money they had spent in preparation. This compensation he ensured by giving them the Cape-Zanzibar line for eight years at £26,000 a year, rather a large compen- sation, if any was needed—the Union Company thriving so well that it would in any case, as its Chairman admitted, have been compelled to increase the tonnage of its ships—but in fact, given without any reason at all. It is an absolute rule that a Mail contract must be sanctioned by the House of Commons, and if the Union Company chose to spend money in anticipation of sanction, that was their fault and not that of the Treasury. They had no right to any compensation at all, and we have no doubt would have gone on with their original engagement quite comfortably, being

well assured that, when their contract expired, the Treasury would give it them again on terms, and being also well assured that with the grand trade a line from England to the Cape, and thence to Aden, would have given them, they could have got along very well without any subvention at all. Subventions are very valuable to these great Companies, because they preclude competition, but we question if Directors in their own parlour care very much about their amount. A few extra shillings out of each passenger are worth a good deal more. Setting aside, therefore„the offer of the British India Company, Mr. Lowe was needlessly lavish, and acted in a way so unlike his usual method of doing business, that we cannot but believe him to have been misinformed, or badly informed, within his own department. On one point, no doubt, Mr. Lowe gave an answer to his assail- ants. He said that the British India Steam Company made their low tender for the service from Aden to the Cape, because they hoped thereby to keep their Indian contracts, and the Company admit that this was the case ; but what difference did that make ? If John Smith will do the work for 2d., in hopes of future and more profitable custom, why give Brown 3d., when he is hoping too for more profitable custom ? If money matters at all, why not deal with the man who hopes at the lowest figure. Mr. Lowe, it is true, did not know of this offer, which was made through the Indian Post Office ; but as the English Post Office did, and had sent up the matter to Lord Kimberley to see what the Cape would say to it, Mr. Lowe ought to have known of it too. The truth of the matter evidently is, that he was accidentally left in ignorance of much that he ought to have known, and gave too much under a fanciful notion of honour.

We suppose the Committee will advise that the contract be rescinded, but we shall be very much surprised if they do not make one or two other remarks. One is that every tender for a mail contract should either be made to the Chancellor of the Exchequer, who can ask information alike from the Post Office or the Colonial Office, or that every tender should be made direct to the Post Office itself. The present conflict, not of powers, but of knowledges, has produced all this con- fusion. The second is, that public competition in such matters is usually only nominal, the rival Companies always combining in the end ; and the third is, that a huge monopoly is some- times very useful. The P. & 0. Company is a huge monopoly, and everybody always belabours it ; but when has it ever left us in the lurch ? As far as we know, it has never but once since 1848 failed to de- liver our letters, and then only partially because a ship went down. It is always where it ought to be, and being so big, can always remedy accidental disasters"without being half ruined. As we read some of the statements in this debate, every steam line to India on both sides is anxious to arrange its contracts so as to terminate synchronously with that of the P. & 0. Company. That means, we imagine, though we have no reason for saying so outside the debate, that all these Companies would like to combine with, or supersede the P. & 0., and so form a giant monopoly ; and we should say, if the terms were strict, it would be an excellent thing for the country if they did. The work to be done is gigantic, and needs a com- pany owning a fleet like a maritime power, and indefinitely more interested in working well for the public,—that is, in attracting passengers and carrying mails quickly, than in getting an extra twopence-halfpenny out of the Treasury, which can, in fact, do anything with it, because anything is better for it than the lose of its monopoly. Of course, so great a Company needs control like every other State department, but when controlled we prefer it much to a heap of smaller com- panies, all keeping up an apparent competition, and all ready at any moment to " make joint tenders,"—i.e., to make a monopoly, but shake off many of its responsibilities.