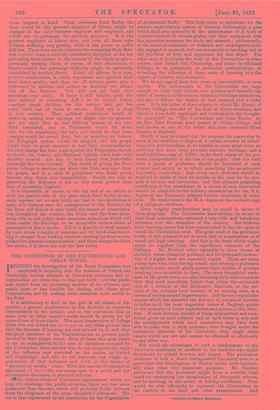 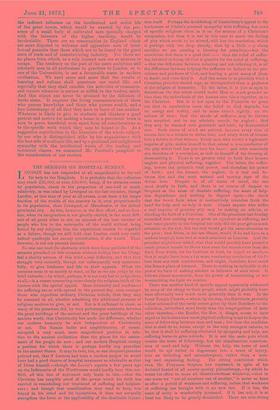 Page 8, 21 June 1873 — THE CONNECTION OF THE UNIVERSITIES AND GREAT TOWNS.
Close

THE CONNECTION OF THE UNIVERSITIES AND GREAT TOWNS.

pENDING the investigation of the Royal Commission now employed in inquiring into the revenues of Oxford and Cambridge, various schemes of University extension and re- organisation are from time to time put forth ; and the public may expect from an increasing number of its advisers, pro- posals more or less feasible for dealing with these great Corporations, and for making their resources more useful to the State.

It is satisfactory to find, on the part of all classes of dis- putants, a general acquiescence in the doctrine of corporate resnonsibility to the nation ; and in the conviction that in some form or other money's worth should be shown for all expenditure of trust funds. The most conservative of College Dons does not defend the status quo on any other ground than that the interests of learning are well secured by it, and that the great resources of the Universities are at present wisely devoted to their proper object. Even of those who most desire to see an enlargement in the area of usefulness occupied by the Universities, there are few who do not recognise the value of the influence now exercised on the nation by Oxford and Cambridge ; and who do not deprecate any vulgar ap- praisement of that influence and work on the theory of " payment by results " alone. With this amount of substantial agreement in limine the way seems open to a useful and not acrimonious discussion of practical reforms. OPthe various ideals of University improvement, which ere long will challenge the public attention, there are two more prominent than the rest, which will probably divide between .them the allegiance of the more thoughtful reformers. The one is that represented by the Association for the Organisation of Academical Study. This body seeks to substitute for the present unsatisfactory system of sinecure Fellowships a plan which shall aim primarily at the maintenance of a body of resident teachers of various grades, and their equipment with the apparatus necessary for study and research ; and secondly, at the material assistance of students and investigators actu- ally engaged in research, but not necessarily in teaching, and at the provision of help and apparatus for this object. The other aims at localising the work of the Universities in other centres than Oxford and Cambridge, and either by affiliated Colleges or by peripatetic or provincial professorships, at extending the influence of those seats of learning into the regions of industry and commerce.

We do not regard these two views as irreconcilable, or even hostile. The endowments of the Universities are large enough to fulfil both objects,—to quicken and intensify the spirit of research in the ancient academic buildings themselves, and also to diffuse the results of that research over a wider area. It is the latter of these objects to which Mr. Stuart, of Trinity College, was one of the first to direct attention, and which is more fully explained and vindicated in the thought- ful pamphlet* on " The Universities and Great Towns," by the Rev. John Percival, head master of Clifton College, and well known as one of the ablest and most successful Head Masters in England.

Briefly it may be stated that he proposes the conversion by some of the wealthier Colleges of a certain number of fellow- ships into professorships, to be tenable in some great town, on condition that such town provides suitable buildings, and a small addition,—say of £200—to the fixed salary of the pro- fessor, independently of the fees of the pupils : that for each town a group of professors should be furnished of such number and variety as to afford something like an adequate University curriculum ; that every such professor should be required to reside at least six months in the year for the pur- pose of lectures and instruction ; and that students possessing certificates of due attendance at a course of such instruction should be admitted to the ordinary examination for the B.A. degree at the University without further conditions of resid- ence. He would reserve the M.A. degree as the exclusive sign of a collegiate residence.

Many weighty considerations may be urged in favour of these proposals. The Universities have already, by means of their local examinations, exercised a very wide and beneficent influence over the education of the country. But hitherto their teaching power has been concentrated in the two spots in which the Universities exist. The great need of the provincial towns at this moment is not so much that of examination, as of sound and high teaching. And this is the want which might easily be supplied from the superfluous resources of the Colleges. Mr. Percival refers especially to three classes of students whose claims for guidance and for systematic instruc- tion of a higher kind are especially urgent. There are many young men who, after leaving school, and entering a profession or skilled trade, would gladly pursue their studies, if genuine teaching were accessible to them. The more thoughtful work- men in the great towns are also becoming daily more conscious that they need something higher than either the occasional visit of a lecturer at the Mechanics' Institute, or the ser-

vices of the ordinary local teacher of an evening class, as a

means of serious mental improvement. And the very remarkable success which has attended the delivery of courses of lectures to ladies in all the most important towns of England, points to the necessity of better organisation and system in this direc- tion. If such lectures, instead of being intermittent and occa- sional, given on such subjects and at such times as may suit the arrangements which local committees may have been able to make with a stray professor, were brought under the systematic direction of the University, they might effect results which are not and cannot be obtained so effectually in any other way.

Nor would the advantages of such a development of the University machinery be confined to the students who might be induced to attend lectures and classes. The permanent residence of half a dozen distinguished University men in a great town like Birmingham or Bristol would serve incident- ally some other very important purposes. Mr. Percival points out that the professors might form a suitable local board for conducting the examination of first-grade schools,

and for assisting in the award of leaving certificates. They would be able efficiently to represent the Universities in the conduct of the local and other examinations. And

the indirect influence on the intellectual and social life of the great towns, which would be exerted by the pre- sence of a small body of cultivated men specially charged with the interests of the higher teaching, would be incalculable. There are no communities in England which are more disposed to welcome and appreciate men of intel- lectual pursuits than those which are to be found in the great seats of trade and of manufacturing industry. Yet there are no places from which, as a rule, learned men are so anxious to escape. The tendency on the part of the more ambitious and scholarly men in all professions to gravitate to London, or to one of the Universities, is not a favourable omen in modern civilisation. We need more and more that the results of learning and culture shall penetrate our social life, and especially that they shall ennoble the activities of commerce, and correct whatever is narrow or selfish in the trading spirit. And this object can never be attained by the diffusion of books alone. It requires the living communication of those who pursue knowledge and those who pursue wealth, and a free interchange of all that they have to learn of one another. Whatever is likely to give to students and thinkers a good pretext and motive for making a home in a provincial town is sure to prove beneficial, even apart from all considerations as to the specific work which they may be bound to do. As a suggestive contribution to the literature of the whole subject, by one who is distinguished alike by his acquaintance with the best side of academic life, and by a profound and enlightened sympathy with the intellectual wants of the trading and industrial classes, we commend Mr. Percival's pamphlet to the consideration of our readers.