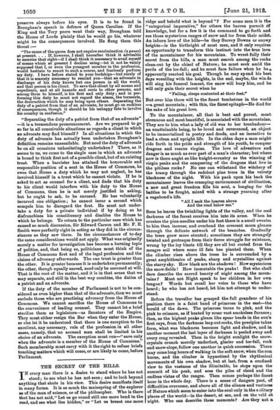 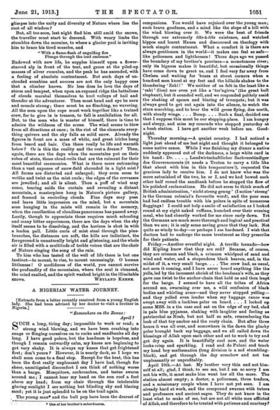 THE SECRET OF THE HILLS.

IN every man there is a desire to stand where he has not stood ; to see what he has not seen ; and to look beyond anything that shuts in his view. This desire manifests itself in many forms. It is as much the mainspring of the explorer as of the man of science, or of the philosopher. Who is there that has not said," Let us go round still one more bend in the road, and see what lies hidden," or " Let us breast one more ridge and behold what is beyond " P For some men it is the "categorical imperative," for others the barren pursuit Of knowledge, but for a few it is the command to go forth and see those mysterious ranges of snow and ice from their midst. An inborn love of the hills—be they Surrey Downs or snowy heights—is the birthright of most men, and it only requires an opportunity to transform this instinct into the true love of the mountaineer for his mountains. To wrest fully their secret from the hills, a man must search among the rocks clean-cut by the chisel of Nature ; he must seek amid the perils of the ice-fall; and he must face failure when he has a apparently reached his goal. Though he may spend his best days wrestling with the heights, in the end, maybe, the win ds will sing his funeral lament, the snow will bury him, and he will only gain their secret when he

"Fading, sleeps contented at their feet."

But over him there will be the finest tombstone in the world —a great mountain ; with this, the finest epitaph—He died for the sake of his great love.

To the mountaineer, all that is best and purest, most strenuous and most beautiful, is associated with the mountains. They are to him what a lady of old was to her troubadour— an unattainable being, to be loved and reverenced, an object to be immortalized in poetry and deeds, and an incentive to lead a clean and upright life. In the olden days a man might ride forth in the pride and strength of his youth, to conquer dragons and rescue virgins. The love of adventure and danger is as much as ever part of a man's character; but where now is there aught so like knight-errantry as the winning of virgin peaks and the conquering of the dragons that live in the pitiless rocks ? No one can withstand the witchery of the tramp through the redolent pine trees in the velvety blackness of the night. With his pack upon his back the mountaineer leaves the cramping environment of civilization, a new and great freedom fills his soul, a longing for the battles to be fought, mixed with a strange yearning after a vagabond's life.

"All I seek the heaven above And the road below me."

Soon he leaves the twinkling lights of the valley, and the cool darkness of the forest receives him into its arms. When he crushes the pine-needles under his feet there is a smell sweeter to him than incense, and overhead the crescent moon gleams through the delicate network of the branches. Gradually the trees grow more stunted ; sometimes they are strangely twisted and grotesque from their fierce struggle for existence, wrung by the icy blasts till they are all but rooted from the meagre soil where some ill fate has planted them. When the climber rises above the trees he is surrounded by a great amphitheatre of peaks, sharp and crystalline against the starry sky. How black are the shadows ! How mysterious the snow-fields ! How immutable the peaks! But who shall dare describe the sacred beauty of night among the moun- tains ? Must not Night speak to her children in her own tongue P Words but recall her voice to those who have heard ; he who has not heard, let him not attempt to under- stand.

Before the traveller has grasped the full grandeur of his position there is a faint band of primrose in the east—the herald of the dawn. The primrose turns to pink, and the pink to crimson, as if heated by some vast smokeless furnace; then, as the highest peaks gleam like spear heads in the sun's first rays, from the darkness leap out rocks, the precipice takes form, what was blackness becomes light and shadow, and in another moment the last layer of darkness is peeled away and every crag revealed. Then in the bright sunlight the snow- crystals crunch merrily underfoot, glacier and ice-fall, rock and snow-slope, follow one another in quick succession. There may come long hours of walking in the soft snow, when the sun. burns, and the climber is hypnotized by the rhythmical movements of his own shadow, but at last, from a confined view to the vastness of the illimitable, he steps upon the summit of his peak, and sees the piles of cloud and the endless vistas of the ranges. Then comes perhaps the finest hour in the whole day. There is a sense of dangers past, of difficulties overcome, and above all of the silence and vastness of Nature which seem to enter into the soul only in the s olitary places of the world—in the desert, at sea, and on the veld at night. Who can describe these moments ? Are they not a

glimpse into the unity and diversity of Nature where lies the root of all wisdom ?

But, all too soon, lest night find him still amid the snows, the traveller must start to descend. With weary limbs the stumbles down the moraine, to where a glacier pool is inviting him to brace his tired muscles, and " With a flame-flash of engulfing fire Plunge through the iced embrace."

Endowed with new life, he stipples himself upon a flower- starred alp in front of the tent, and gazes at the piled-up masses of silver cumulus, and the peak he has ascended, with a feeling of absolute contentment. But such days of un- clouded sunshine and success are not the only happy ones that a climber knows. No less does he love the days of storm and tempest, when upon an exposed ridge the battalions of clouds marshal themselves to hurl volleys of bail and thunder at the adventurer. Then must hand and eye be sure and muscle strong; there must be no flinching, no wavering. All the men upon the rope must work together like a trained crew, for to give in is treason, to fall is annihilation for all. But, to the man who is master of himself, there is time to admire the wildness of the scene. The wind seems to blow from all directions at once ; in the riot of the elements every- thing quivers and the sky fella as solid snow. Already the figures in front are a mass of white, and great icicles bang from beard and hair. Can there really be life and warmth below ? Or is this the reality and the rest a dream ? Then, again, there are the days when the mountains put on their robes of state, those cloud-veils that are the raiment for their most beautiful ceremonies. What is there more entrancing than a vast expanse of snow-field shrouded in a light mist ? All forms are distorted and enlarged; they even seem to writhe and twist as the mist curls ; the edges of the crevasses are jewelled; and all is silent. Then a puff of wind may come, tearing aside the curtain and revealing a distant mountain, a masterpiece hung in Nature's picture gallery, and framed in encircling clouds. Fine days may pass and leave little impression on the mind, but a mountain seen hanging in the mists will remain in the memory, when the recollection of cloudless panoramas has passed away. Lastly, though to appreciate these requires much schooling and many bitter experiences, there are the days when the sky itself seems to be dissolving, and the horizon is shut in with a leaden palL Little curls of mist steal through the pine- branches, the distances are soft, the hills are indistinct, the foreground is unnaturally bright and glistening, and the whole air is filled with a multitude of treble voices that are the choir of Nature singing the song of the rain.

To him who has tasted of the well of life there is but one instinct—to mount, to rise, to mount unceasingly. 0 human littleness ! 0 sordidness of the world, you cannot survive the profundity of the mountains, where the soul is cleansed, the mind exalted, and the spirit washed bright in the illimitable