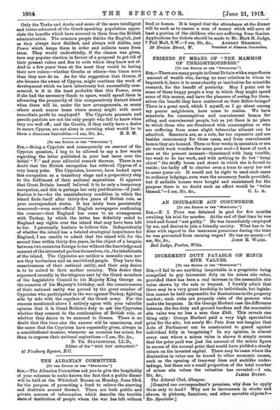 [To THE EDITOR 07 THE "SPECTATOR."] SIR,—The Albanian Committee ask you to give the hospitality of your columns to make known the fact that a public dinner will be held at the Whitehall Rooms on Monday, June 23rd, for the purpose of promoting a fund to relieve the starving and destitute around Scutari. There are both public and private sources of information which describe the terrible state of destitution of people whom the war has left without food or homes. It is hoped that the attendance at the dinner will be such as to ensure a sum of money which will save at least a portion of the children who are suffering from famine. Applications for tickets should be made to Mr. Mark H. Judge, 7 Pall Mall, S.W.—I am, Sir, &c., AUBREY HERBERT, 28 Bruton Street, W. President of Albanian Committee,