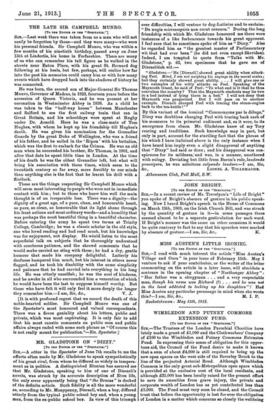 [To THE EDITOR Or THE " SPECTATOR."] SIR,—Last week there was taken from us a man who will not easily be forgotten by those—and they were many—who were his personal friends. Sir Campbell Munro, who was within a few months of his ninetieth birthday, passed away on June 13th at Lindertis, his home in Forfarshire. There are many of us who can remember his tall figure as he walked in the streets near Eaton Place, with his great St. Bernard dog following at his heels, but few, perhaps, will realize how far into the past his memories could carry him or with how many events which have dropped back into the shadows of history he was connected.

He was born, the second son of Major-General Sir Thomas Munro, Governor of Madras, in 1823, fourteen years before the accession of Queen Victoria, and be was present at her coronation in Westminster Abbey in 1838. As a child he was taken to the "half-way house" between Manchester and Salford to see the first railway train that ran in Great Britain, and his schooldays were spent at Rugby under Dr. Arnold. Here he was a class-mate of Tom Hughes, with whom be kept up his friendship till Hughes's death. He was given his nomination for the Grenadier Guards by the great Duke of Wellington, who was a friend of his father, and he sailed in the Ripon' with his battalion, which was the first to embark for the Crimea. He was an old man when he succeeded his brother, Sir Thomas, in 1901, and after that date he spent little time in London. At the time of his death he was the oldest Grenadier left, but what will bring his association with those times, which seem to the twentieth century so far away, more forcibly to our minds than anything else is the fact that he learnt his drill with a flintlock.

These are the things respecting Sir Campbell Munro which will seem most interesting to people who were not in immediate contact with him ; but to those who knew him well the main thought is of an irreparable loss. There was a dignity—the dignity of a great age, of a pure, clean, and honourable heart, so pure, so clean, so honourable that its light shone through his least actions and most ordinary words—and a humility that was perhaps the most beautiful thing in a beautiful character. Before entering the army be spent two terms at Trinity College, Cambridge ; he was a classic scholar in the old style, one who loved reading and had read much, but his knowledge was for enjoyment, not display. He would listen to the most superficial talk on subjects that he thoroughly understood with courteous patience, and the shrewd comments that he would make carried no sting with them ; he had a dry, gentle humour that made his company delightful. Latterly his deafness hampered him much, but his interest in others never flagged, and he took his disability with the same simplicity and patience that he had carried into everything in his long life. He was utterly unselfish ; he was the soul of kindness, and be awoke in all who surrounded him a veneration of which he would have been the last to suppose himself worthy. But those who have felt it will only feel it more deeply the longer they remember him.—I am, Sir, &c., V. J.

[It is with profound regret that we record the death of this noble-hearted soldier. Sir Campbell Munro was one of the Spectator's most honoured and valued correspondents. There was a fierce geniality about his letters, public and private, which was most captivating. It is only fair to add that his most caustic comments on public men and public affairs always ended with some such phrase as " Of course this is not really meant for publication."—En. Spectator.]