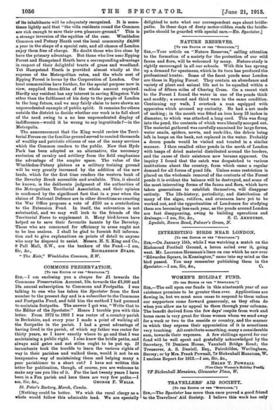 [To THE EDITOR OF THE "SPECTATOR."] SIR,—Your article on "Nature Reserves," calling attention to the formation of a society for the protection of our wild fauna and flora, will be welcomed by many. Nature-study is rightly encouraged in all our schools. With this has sprung up a demand for specimens, which in its turn has produced the professional hunter. Some of the finest ponds near London are those in Epping Forest. They contain an abundance and variety of plant and animal life not to be equalled within a radius of fifteen miles of Charing Cross. On a recent visit to the Forest I found the water in one of the ponds thick and muddy; a second and third were in the same condition. Continuing my walk, I overtook a man equipped with apparatus which aroused my curiosity. He had a net made of sacking ; in the mouth was fitted an iron hoop 18 inches in diameter, to which was attached a long cord. This was flung into the pond, the contents of which were literally scooped out. The material gathered was carefully examined for large forms, water snails, spiders, newts, and such-like, the debris being left in heaps on the bank, not replaced in the water. Probably a dozen ponds would be visited and treated in a similar manner. I then recalled other ponds in the north of London with heaps of dried material distributed around the borders, and the cause of their existence now became apparent. On inquiry I found that the catch was despatched to various institutions about the country, from which came a regular demand for all forms of pond life. Unless some restriction is placed on the wholesale removal of the contents of the Forest ponds it is evident the balance will be destroyed, and some of the most interesting forms of the fauna and flora, which have taken generations to establish themselves, will disappear entirely. The life-history, periodicity, and distribution of many of the algae, rotifera, and crustacea have yet to be worked out, and the opportunities of Londoners for studying them are becoming less each year, as the ponds around London are fast disappearing, owing to building operations and