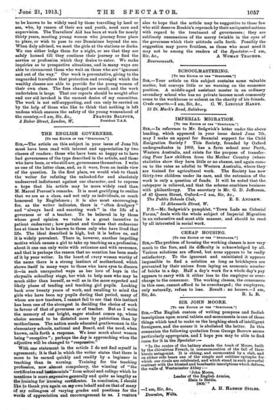 [To THE EDITOR Or THE •'SPECTATOR.") SIR,—In reference to Mr. Sedgwick's letter• under the above heading, which appeared in your issue dated June 7th, may I make an appeal for financial support for the Child Emigration Society ? This Society, founded by Oxford undergraduates in 1909, has a farm school near Perth,. Western Australia, and exists for the purpose of transfer- ring Poor Law children from the Mother Country (where statistics show they have little or no chance, and again come on to the rates as adults) to Western Australia, where they- are trained for agricultural work. The Society has now thirty-two children under its care, and the extension of the work is only a question of funds. It will be noted that the ratepayer is relieved, and that the scheme combines business with philanthropy. The secretary is Mr. G. D. Jefferson, of 43 Queen Street, Oxford.—I am, Sir, &c.,

P.S.—Mr. Sedgwick's pamphlet. "Town Lads on Colonial Farms," deals with the whole subject of Imperial Migration in an exhaustive and most able manner, and should be read by all interested in social work.