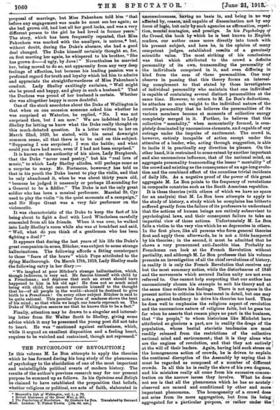 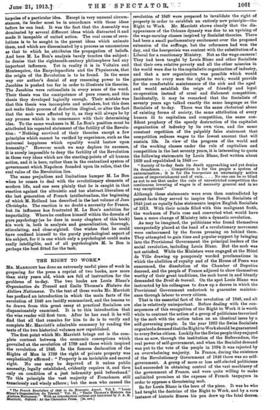 THE PSYCHOLOGY OF REVOLUTION.: IN this volume M. Le Bon

attempts to apply the theories which he has formed during his long study of the phenomena of psychology to the elucidation of one of the most important and unintelligible political events of modern history. The results of the author's previous research may for our present purpose be summed up as follows. In his Opinions and Beliefs he claimed to have established the proposition that beliefs, whether religious or political, are acts of faith, elaborated in

• Maxwell's Life of Wellington, vol. i., p. 78. f British Statesmen of the Great War, p. 241. The Psychology of Refutation. By Gustave Le Bon. Translatedby Bernard Minll London; T. Fisher Unwin. [101. 63. net.] unconsciousness, having no basis in, and being in no way affected by, reason, and capable of dissemination not by any force of logic, but only by such agencies as affirmation, repeti- tion, mental contagion, and prestige. In his Psychology of the Crowd, the book by which he is best known to English readers, our author came more directly into touch with his present subject, and here he, in the opinion of many competent judges, established recruits of a genuinely scientific value. The most striking of his conclusions was that which attributed to the crowd a definite personality of its own, transcending the personality of the individuals comprised in it, and even differing in kind from the sum of these personalities. One may observe in passing that this theory forms an interest- ing complement to that stated by those investigators of individual personality who maintain that one individual is capable of containing several distinct personalities at the same time. However, to return to M. Le Bon's deductions, he attaches so much weight to the individual nature of the crowd's personality that he believes the personalities of its various members become at moments of collective energy completely merged in it. Further, lie believes that this collective " mentality," when momentarily formed, is com- pletely dominated by unconscious elements, and capable of any outrage under the impulse of excitement. The crowd is, however, entirely incapable of action except under the stimulus of a leader, who, acting through suggestion, is able to incite it in practically any direction he pleases. On the other hand, it is restrained to some extent by another important and also unconscious influence, that of the national mind, an aggregate personality transcending the lesser " mentality " of the crowd and existing as the consequence of an age-long evolu- tion and the combined effect of the countless trivial incidents of daily life. As a negative proof of the power of this great aggregate M. Le Bon points to the frequency of revolutions in composite countries such as the South American republics.

It is these theories (with others of which we have no space for an analysis) that M. Le Bon here attempts to apply to the study of history, a study which he complains has hitherto suffered greatly from the failure of its professors to understand that the actions of human beings are entirely subservient to psychological laws, and their consequent failure to take an impartial view of those actions. Unfortunately M. Le Bon falls a victim to the very vice which he so deprecates in others. In the first place, like all persons who form general theories first and apply them afterwards, he is not a little hampered by his theories; in the second, it must be admitted that be shows a very pronounced anti-Jacobin bias. Probably no Frenchman can look at the French Revolution without partiality, and although M. Le Bon professes that his volume presents an investigation of all the chief revolutions of history, in reality it is only the French Revolution that receives any but the most summary notice, while the disturbances of 1848 and the movements which secured Italian unity are not even referred to. One cannot help suspecting that our author has unconsciously chosen his example to suit his theory and at the same time relieve his feelings. There is not space in the present notice to criticize his treatment in detail, but one may note a general tendency to drive his theories too hard. Thus he does well to emphasize the religious aspect of revolution and the unconscious nature of religious faith, but he goes too far when he asserts that reason plays no part in the business, that " the people," to whom historians like Michelet have attributed so glorious a part, are in reality the dregs of the population, whose bestial atavistic tendencies are most readily released from the restrictions of the collective national mind and environment; that it is they alone who are the engines of revolution, and that they act entirely at the will of their leaders. Again, having laid such stress on the homogeneous action of crowds, he is driven to explain the continual disruption of the Assembly by saying that it must be regarded as composed of a number of different crowds. In all this he is really the slave of his own dogmas, and his mistakes really all come from his excessive concen- tration on the narrow issues they involve. What be does not see is that all the phenomena which he has so acutely observed are caused and conditioned by other and more important phenomena. The homogeneity of a crowd does not arise from its mere aggregation, but from its being aggregated for a particular purpose, or rather under the impulse of a particular idea. Except in very unusual circum- stances, its leader must be in accordance with those ideas before he can lead. It was the fact that the Assembly was dominated by several different ideas which distracted it and made it incapable of united action. The real cause of revo- lutions is to be sought in the parent ideas which animate them, and which are disseminated by a process as unconscious as that to which he attributes the propagation of beliefs. And here M. Le Bon's analysis barely touches the subject : he denies that the eighteenth-century philosophers had any important influence. Yet in reality it is in Voltaire and Montesquieu, the Encyclopaedists and the Physiocrats, that the origin of the Revolution is to be found. In the same way our author's denial of any reasoning power to the Jacobins is pushed too far in order to illustrate his theories. The Jacobins were rationalists in every sense of the word. Their thesis was the omnipotence of pure reason, and this thesis they developed logically enough. Their mistake was that this thesis was incomplete and mistaken, but this does not make their process of deduction illogical, or alter the fact that the mob were affected by it, as they will always be by any process which is in consonance with their determining idea. To the same weakness in M. Le Bon's position must be attributed his repeated statement of the futility of the Revolu- tion : " Nothing survived of their theories except a few principles which cannot be verified by experience, such as the universal happiness which equality would bestow upon humanity." However much we may deplore its excesses, it is surely impossible to deny the fertility of the Revolution in those very ideas which are the starting-points of all human action, and it is here, rather than in the centralized system of government which Napoleon founded upon its relics, that the real value of the Revolution lies.

The same prejudices and limitations hamper M. Le Bon when he comes to deal with the revolutionary elements of modern life, and one sees plainly that he is caught in that reaction against the altruistic and too abstract liberalism of the last generation of French intellectualism, the beginning of which M. Rolland has described in the last volume of Jean Christophe. The reaction is no doubt a necessity for France, but its influence has frustrated M. Le Bon's ambition for impartiality. Where he confines himself within the domain of pure psychology (as he does in many chapters of this book) ilia work is, both in analysis and generalization, thorough, stimulating, and clear-sighted. One wishes that he could base confined himself to the purely psychological aspect of his subject, for it is one which only a psychologist could make really intelligible, and of all psychologists M. le Bon is perhaps the best fitted for the task.